After Years of Disinvestment, Rural Health Care Systems May Be Ill-Equipped to Cope with an Outbreak 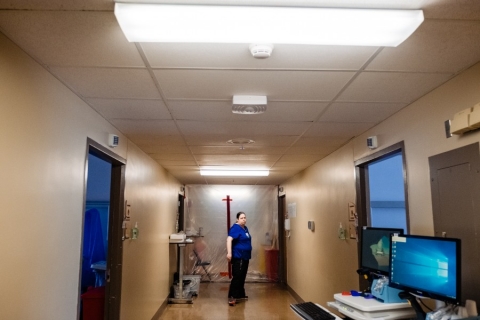 On March 14, a hospital employee stands in front of a sealed space for nursing staff to don necessary equipment for testing at Dayton General Hospital. Dayton, a small town in rural southeast Washington with an aging population, recorded its first positive test for Coronavirus and is waiting on results of more tests.   Photo by Nick Otto / Getty Images

Editor's Note: This article was orignally published by Stateline, an initiative of The Pew Charitable Trusts. Read the original article here.

If you’re exhibiting coronavirus symptoms and meet the criteria, you should get tested.

But if you live in rural Presidio County, on the western end of the Texas-Mexico border, be prepared to travel. County residents who are severely ill are being told to go to Big Bend Regional Center in Alpine, Texas, which is nearly 90 miles away from the city of Presidio. The hospital will stabilize those patients before sending them nearly 200 miles to El Paso, according to a hospital spokeswoman.

Patients in the region seeking test results should be prepared to wait. The 25-bed hospital in Alpine takes samples and sends them to the nearest testing site, also in El Paso. Those tests are reported in a day or two. Three local clinics also have a handful of coronavirus tests, but those are taken by a courier to El Paso on weekdays, and then flown across the state to a lab in Dallas. The turnaround time is three to four days, said Dr. Adrian Billings, with Preventative Care Health Services in Alpine.

“People who live out here in West Texas, we’re used to it,” said Gary Mitschke, emergency management coordinator of Presidio County. “If you don’t have 100 miles — well, you really haven’t gotten anywhere.”

As in the rest of the country, most of Texas’ coronavirus cases have been in its largest cities, including Austin, Dallas, Houston and San Antonio. But the virus is moving toward less populated areas.

El Paso also is metropolitan, but it’s far west of the coronavirus clusters in the eastern and central parts of the state. On Friday and Sunday, the City of El Paso Department of Public Health reported its first two presumptive positive test results for COVID-19, also the earliest reported cases in West Texas.

“We’re just as exposed as anybody else in the country as far as I’m concerned,” Mitschke said.

Rural people often travel to urban centers for food, shopping and health care. For example, Harrison County, Kentucky, which saw the state’s earliest cases of coronavirus, has a population of roughly 19,000 people. But it’s less than an hour’s drive from an urban center, Lexington.

Rural areas face numerous challenges should they encounter a coronavirus outbreak. There are fewer hospitals, residents travel longer distances to get medical care and a higher proportion of people are older, poorer and sicker.

By some measures, such as adult obesity, Presidio County fairs better than Texas overall. But 32% of the population is in poor or fair health compared with 18% of Texans, according to the 2019 County Health Rankings State Report from the University of Wisconsin Population Health Institute. There is one primary care physician for every 2,320 people, compared with one per 1,660 people statewide.

On average, 69% of the U.S. rural population is over the age of 65, compared with 35% of the non-rural population, according to January 2020 research from the Chartis Group, a health care consulting firm, provided to the National Rural Health Association.

“If you have no place to go or if you have to drive an additional hour or two to get somewhere, people just don’t go,” said Doug Farquhar, program director for environmental health at the National Conference of State Legislatures. “This virus doesn’t seem to be avoiding rural areas.”

For example, in Colorado, several rural areas have documented cases, including mountain areas such as Eagle, Pitkin and Summit counties that are popular with tourists.

After years of public health disinvestment, rural health care systems are ill-equipped to fight an outbreak of the coronavirus or ward off its spillover effects to local economies, according to experts.

Since the Affordable Care Act went into effect in 2010, 126 rural hospitals have closed their doors. Last year, 19 rural hospitals shuttered, the most of any year since 2005, when the North Carolina Rural Health Research Program at the University of North Carolina-Chapel Hill began tracking closures.

But in Kentucky, some experts push back on the idea that rural hospitals aren’t up to the task.

“The occupancy rates may actually be lower in quite a few rural hospitals,” said Ty Borders, director of the Rural and Underserved Health Research Center at the University of Kentucky in Lexington. “They could actually have more capacity to take in more severe patients.”

Rural providers are prepared for a reasonable surge, according to Elehwany, but they would need equitable access to the U.S. Department of Health and Human Services stockpile of medical and pharmaceutical supplies should there be a widespread pandemic.

“We need to make sure there’s an equitable distribution and find out proportionally where the pockets of the pandemic are,” Elehwany said. “If they’re in rural communities, we need to be ready to get some supplies to them right away.”

“What businesses can stay open when they're operating at a loss?” Elehwany asked.

Additional "vulnerable" states, where more than 40% of rural hospitals risk closure, include Florida, Mississippi, Missouri and Tennessee. Alongside Texas, none expanded Medicaid under the Affordable Care Act, which would have insured more low-income people. Rural hospitals in non-Medicaid expansion states are treating more people who have no insurance. Therefore, they are providing more care for which they aren’t reimbursed.

‘We Have No Cushion’

The University of Kentucky’s Borders expects similar coronavirus exposure rates in urban and most rural areas, with the possible exception of extremely remote areas, such as mountainous Appalachia in eastern Kentucky.

“My hunch is those areas are more protected from coronavirus because there’s less exposure,” Borders said.

But Elehwany isn’t sure that any rural areas are safe.

“I’m worried there’s a sense, false assurance, that we’re not at risk,” Elehwany said. “I think we need to be prepared for it because certainly the communities in rural America are very close-knit, especially when you talk about areas where faith-based care and faith-based contact is very strong and very significant."

A. Scott Lockard, public health director of a district that covers seven eastern Kentucky counties, has worked nonstop since the Bluegrass State got its first case of COVID-19 earlier this month.

So far, there are no reported cases in Lockard’s area, but the virus is creeping closer. The first cases were clustered in Harrison County, where at least six people have contracted the virus. By Monday, the virus had moved further east to Montgomery, just one county away from Lockard’s coverage area.

“We have no cushion,” Lockard said. “We’re operating at peak efficiency just to do our jobs right now and whenever you have a crisis like this, you have to let something else go.”

It’s hard to imagine where else to cut, Lockard said. He has only one epidemiologist. He’s redirecting other staff, including a home health nurse. “It’s an all-hands-on-deck approach right now,” Lockard said.

State budget cuts, rising requirements for pension contributions and the decline of the coal industry are among the forces that have hampered Kentucky’s public health infrastructure and eroded its workforce. As the local population declined, public health lost about 25% in funding from property tax revenue, Lockard said.

Last year, the local health department workforce was 2,269, down 34% from 2012, according to the Kentucky Center for Economic Policy. Without the ability to invest in people or programs, it’s hard for Lockard to fill positions.

“It’s all taking a toll on our ability to respond,” Lockard said.

Officials in Harrison County are monitoring 160 people daily who were connected to the county’s first six cases.

“So you can imagine the [demand for] manpower that creates for us in terms of calling and asking how these people are feeling, monitoring their temperatures,” said Crystal Miller, public health director of the WEDCO District Health Department. It’s helped that the district serves four counties who’ve been able to share resources, Miller said.

“Everything is being canceled for fear of having too many medical providers in one location,” said Tina McCormick, executive director of the Kentucky Rural Health Association.

As the coronavirus spreads, local officials in Presidio County, Texas, are trying to educate the public. There’s little else they can do with limited resources.

“We’re always on the verge of being overextended,” said Mitschke, the county emergency management coordinator. He’s also the fire chief for a local volunteer fire department.

The county’s two major cities, Presidio and Marfa, are about 60 miles apart. Marfa, the county seat, draws international tourists to its thriving arts community. Visitors sometimes double the county’s population of roughly 7,000, according to Mitschke.

Both cities have ambulance services to respond to local medical calls and back each other up.

“If we get two or three [calls] at one time,” Mitschke said, “that pretty much takes care of our resources in the county for EMS calls.”

The nearest hospital and mutual aid emergency medical service are at least 20 miles from Marfa. Tack on another 60 miles from the city of Presidio.

April Simpson reports on rural issues at Stateline. Before joining Pew, April was associate editor of Current, where she covered public broadcasting and nonprofit media. April was a Fulbright fellow in Botswana and Eastern Democratic Republic of Congo fellow with the International Women’s Media Foundation. She has written for the Seattle Times and the Boston Globe, among other publications. April is a graduate of Smith College and the London School of Economics and Political Science.