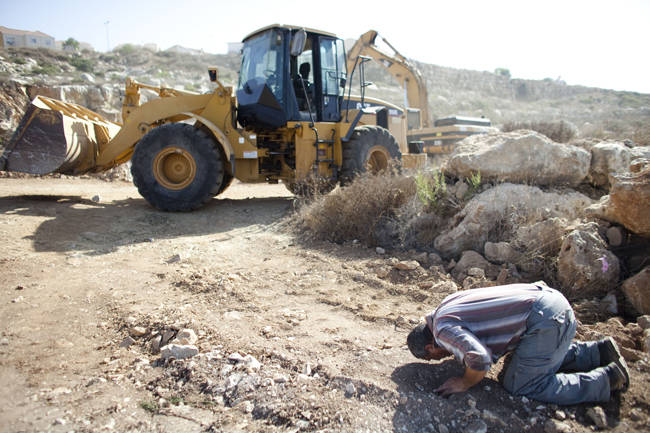 In an era of globalization, countries are more linked through economic ties than by international law. So when one government decides to violate human rights with impunity, sometimes the best way for the world to respond is by taking its business elsewhere. That is why the Boycott, Divestment, and Sanctions campaign (BDS) has proven to be one of the most effective mobilization tools in the international movement against the Israeli occupation. From inside Israel and Palestine, however, the movement has complex ripple effects.

People living under occupation face unique obstacles when leveraging the instruments of capitalism for political emancipation.

The main components of BDS involve consumer boycotts of Israeli products; the breaking of ties between educational and cultural institutions and Israeli counterparts, and ultimately, sanctions by governments in order to isolate Israel in the international arena.

Though the movement has an international scope, it originated with Palestinian civil society groups and is today coordinated by a Palestinian-led BDS National Committee. But how do Palestinians themselves mobilize against an economic system that they are a part of? As consumers and business owners, Palestinians may have little flexibility about sourcing Israeli goods when local production has been stymied. As workers, they frequently have little choice about jobs when Israeli bosses are often the only ones hiring. (These challenges were underscored last year in official efforts to cut off settlement economies in the West Bank.)

But within Palestine, the boycott movement is less about the economic logistics than about channeling popular outrage into participatory politics.

According to Beesan Ramadan, a Nablus-based student activist, as a movement strategy, BDS for Palestinians centers on personal transformation through the discipline of resistance. Among Palestinian youth, Ramadan said in an interview, consciousness is rising step by step:

It's hard to get the people convinced that with over 20 years of relying on the Occupier and having this … sort of mentality that everything that comes from my oppressors is good, and should be better than what I would make. So for me, locally, it's working on the actual ground, and on the market itself, but [it's] also decolonizing the mind from previous ideas about the occupation. I think this is part of the big picture.

The big picture is not a simple one for the most economically vulnerable Palestinians. The legal and economic infrastructure of the occupation allows Israel, both the government and private sectors, to profit from its draconian control of Palestinian society, including its workers and natural resources.

The 1994 Paris Protocol purported to foster trade and labor relations between Israel and the occupied territories. But restrictions on freedom of movement, according to human rights monitors, have prevented real economic development and exacerbated inequality.

Way back in the aftermath of the 1967 war, Israel imposed an economic stranglehold on Palestinians by tightly restricting the issuing of business licenses and rendered people in the occupied territories dependent on Israeli exports. Farmers suffered widespread confiscation of their lands, which still continues today with encroachment by settlers on Palestinian communities.

For Arab workers, the role of labor in the resistance movement reflects the tension between the struggles for survival and justice. Facing severe unemployment and a crumbling infrastructure, low-wage work with Israeli employers may be the only job opportunity available—a predicament that renders them even more vulnerable to abuse and exploitation.

Rights advocates across Israel and the Palestinian territories report that in addition to the wholesale ghettoization of Palestinian workers through militarized borders, even less restricted Arab workers in Jerusalem face heavy discrimination in a two-tier workforce.

While it may be unfeasible for Palestinian workers to reject jobs linked to the Israeli economy, progressive labor groups see the goal of defending workers and the goals of BDS as complementary.

The Palestinian Trade Union Coalition for BDS recently formed to champion the movement “as the most effective form of solidarity with the Palestinians in our struggle to end Israeli occupation and apartheid.” Citing the legacy of the South Africa trade union movement in the battle against Apartheid in the 1980s, the coalition's manifesto declared:

BDS is not as cut and dry for some labor groups working with Palestinians, which after all still must conduct their day-to-day advocacy within an inequitable system. While the General Union of Palestine Workers has endorsed the campaign, the Palestinian General Federation of Trade Unions recently expressed general solidarity with unions that have participated in BDS but did not explicitly align itself with the campaign.

Workers Advice Center-Maan (WAC), supports the overall goal of BDS but calls for a policy of  a “targeted boycott” of goods and services specifically related to the settlement economies, arms sales, and international accords that support Israeli military actions. The leaders of the organization have expressed reservations about the possibility that an international boycott may provoke a political backlash from Israelis and harden the right wing.

Though it is ideologically left wing, WAC's campaigns are pointedly inclusive, seeking to link Israeli and Palestinian workers under a banner of anti-racism and class consciousness. They see their main contribution to the struggle in unifying working people, Jews and Arabs alike, and insupporting grassroots development in Palestinian communities, such as the fair-trade women's cooperative Sindyanna of Galilee.

Erez Wagner, a field organizer with WAC's Jerusalem branch, approached the concept of a boycott with the caveat that the campaign judges institutions not by a blanket targeting of Israel but according to the organizations' specific positions and activities.

Nonetheless, for many Palestinians, even those who depend on Israel to earn a living, the BDS movement at the very least is a platform for mobilization. The broad, nonviolent campaign--buoyed by the Arab Spring uprisings--might lift Palestinian civil society beyond the demoralization stemming from years of failed rebellion, political isolation by Israel and U.S. policies, partisan infighting within Palestine, and the humiliation of constant military siege.

Though the principles may appear vague—no agenda, no talk of a one or two-state solution—the logic of BDS is a straightforward ultimatum: if the political establishment refuses to allow Palestinians a voice, and war has already proven a dead end, people have no choice but to let their money do the talking.

BDS will provoke controversy, and that's the point. No boycott movement will succeed unless it is coupled with education and mobilization; solidarity is mediated through debate and understanding of how different elements of the movement respect each other's efforts and limitations.

If the boycott movement inspires a sense of collective sacrifice, it will encourage fresh thinking about a peaceful resolution to the conflict. And even the workers with the most to lose from the economic impact--Palestinians living in poverty and working-class Israelis, will find common ground on building a truly equitable society.

The evolving BDS concept evokes a historical antecedent in the liberation struggle of South Africa. In 1959, anti-apartheid leaders stated their case on the value of boycotts:

It has been argued that Non-White people will be the first to be hit by external boycotts. This may be so, but every organization which commands any important Non-White support in South Africa is in favour of them. The alternative to the use of these weapons is the continuation of the status quo and a bleak prospect of unending discrimination. Economic boycott is one way in which the world at large can bring home to the South African authorities that they must either mend their ways or suffer for them.

BDS is a strategy, not a solution. It simply proves there is no room in an interconnected world for unjust division, and that everyone has a stake, and a price to pay, in ending the oppression.

This dispatch is based on reporting the author did during a recent visit to Nablus in the West Bank, where she taught social media workshops with the Zajel Youth Exchange Program.