Whither Change to Win? 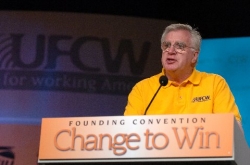 Joe Hansen, international president of the United Food and Commercial Workers and current chair of Change to Win, speaks at the organization's founding convention in 2005.   (Photo from UFCW.org)

Most six-year-olds like to have a big birthday bash, with lots of games, presents, balloons, sugary cake, and as much noise as possible.

But Change to Win, the new kid on labor's block born in 2005, has opted for a quieter approach, much in contrast with the celebratory and self-aggrandizing scene at its festive founding convention in St Louis six years ago. On that occasion, CTW founders like Tom Woodruff, currently its executive director, talked about spending $750 million a year on new organizing drives similar to those launched by the Congress of Industrial Organizations (CIO) in the 1930s. Then-UNITE HERE co-president Bruce Raynor (recently drummed out of SEIU for alleged expense account fiddling) gave a radical-sounding speech calling for the imprisonment of corporate bosses who stole workers’ pension fund money.

Six years after these rhetorical fireworks, only four of the seven unions that broke away from the AFL-CIO to form CTW remain in the latter camp. The union coalition that sociologist Ruth Milkman (and others) once touted as “labor’s best hope—maybe its only hope—for revitalization” is rarely seen or heard from. At the International Brotherhood of Teamsters (IBT) convention in Las Vegas in July, leaders of the two largest CTW affiliates—James Hoffa, president of the host union, and Mary Kay Henry, president of the Service Employees International Union (SEIU)—lathered much praise on each other. But neither ever mentioned the words “Change to Win,” in 40 minutes worth of speechifying about the close working relationship between SEIU and the IBT.

On its own website, CTW recently gave itself a downgrade. It now describes the alliance of SEIU, IBT, United Food and Commercial Workers (UFCW), and the tiny United Farm Workers (UFW) as a “Strategic Organizing Center,” not a new labor federation. The participating unions are working on just four “innovative organizing campaigns in the private sector economy”—involving farm labor, port trucking, warehousing, and Wal-Mart. (All four groups of workers were a membership recruitment focus of the UFW, IBT, and/or UFCW respectively long before they left the AFL-CIO and linked up together.) This modest re-conception of Change to Win’s role is a far cry from earlier claims to be a dynamic, fast-growing alternative to a labor federation forever hobbled by its own dysfunctional bureaucracy and internal protocol.

The common denominator of CTW seems to be its affiliates' shared interest in continuing to pay lower per capita dues than the national AFL-CIO requires (now 65 cents per member per month); the four “Strategic Organizing Center” participants pay about half what other cash-strapped unions contribute to the federation now led by Rich Trumka, former president of the United Mine Workers. If the CTW defectors had remained in the main “House of Labor,” AFL programs and staff would have received an estimated $150 million more in dues and special assessments since 2005.

The second coming of the CIO?

At the time of its birth, skeptics argued that CTW was more about the money (as in paying less), than a different kind of union functioning. (At most, CTW recalled the short-lived Alliance for Labor Action, an odd-coupling of the Chemical Workers, Teamsters, and Auto Workers formed in the late 1960s when the UAW and IBT were both on the outs with the AFL-CIO.) Critics saw the CTW union defections as a self-serving dues revolt, dressed up as a principled parting of ways between a recalcitrant “old guard” (then personified by one-time progressive hero John Sweeney) and Sweeney’s frustrated and impatient former backers—Bruce Raynor, John Wilhelm, then co-president of UNITE-HERE, and Andy Stern, now “president emeritus” of SEIU.

In the parched landscape of American labor, circa 2004-5, CTW shimmered briefly as an oasis in the desert. But its journalistic and campus cheerleaders, like UCLA Professor Milkman, failed to see that it was a mixed bag at best, more mirage than real, and hardly the second coming of the CIO. Within its ranks were the Carpenters, already estranged from the AFL-CIO and detested by other building trades unions for poaching on their turf and undermining industry standards. (See this story I wrote back in September 2009.)

Carpenters president Douglas McCarron was George Bush’s closest friend in the labor movement and, thus, not the best example of the new approaches to politics ostensibly favored by CTW. Teamster president Hoffa, another unlikely “reformer,” professed no interest in realigning union jurisdiction in the ideal fashion favored by Stern, Raynor, and Wilhelm.

Those “Ivy League Amigos”—as I call them in my recent book, The Civil Wars in U.S. Labor—were the driving force behind the “New Unity Partnership” (NUP) that preceded the seven union split from the AFL-CIO. It was an article of faith among them that top-down structuring, assisted by union mergers, was the panacea for labor. Before his departure, Raynor insisted that the AFL-CIO’s 50-plus affiliates should consolidate into just 10 to 15 mega-unions, with less overlapping jurisdiction and a better focus on “core industries.”

A Change to Win divorce

To demonstrate how progressive unions could supersize themselves overnight and grow faster, Raynor and Wilhelm formed the 440,000-member UNITE HERE. Within five years, however, this much applauded “marriage of equals” foundered on the rocks of a messy divorce that proved costly and disruptive for both hotel and garment workers. The meddlesome third party in that troubled relationship was none other than CTW founding father Andy Stern. In early 2009, while simultaneously laying waste to his own hospital worker base in California, Stern wooed a rump group from UNITE HERE, led by Raynor, into SEIU.

The CTW civil war between UNITE HERE and the SEIU-affiliated “Workers United” proved to be a carnival of organizational cannibalism. Eighteen months and tens of millions of dollars later, SEIU—by then headed by Mary Kay Henry—sued for peace (and, not long afterwards, got rid of Raynor).

As Gonzalez predicted, UNITE HERE, followed by the Laborers, soon re-affiliated with the AFL-CIO, following the Carpenters out the door of CTW (an embarrassing return to independent union status that CTW took more than a year to acknowledge).

In its current downsized condition, CTW is still dominated by SEIU, its largest financial backer. Although UFCW president Joe Hansen has replaced now retired SEIU secretary-treasurer Anna Burger as chair of the group, three of its seven “leadership council” members are SEIU officers or executive board members. One of them, SEIU EVP Woodruff doubles as “executive director” of CTW. My information requests for this article were initially fielded by Bob Callahan, a veteran SEIU operative involved in Stern’s disastrous 2009-11 trusteeship over United Healthcare Workers-West; he failed to provide any requested data about CTW’s current budget, staffing, or dues structure.

When asked to assess the state of Change To Win today, one longtime union staffer likened its current functioning to that of a single AFL-CIO headquarters department, the Food and Allies Services Trades (FAST) group, before the split. Like CTW today, FAST helped coordinate corporate campaigns and organizing by some of the same national unions. After its key affiliates defected to CTW, FAST was disbanded and its talented corporate campaign staff dispersed elsewhere. Younger labor activists who gravitated toward CTW for field staff jobs, after the split, often ended up disillusioned—and laid off as well.

As one ex-CTW political campaigner told me, “Change to Win was a husk of a federation and always has been. There was not a whole lot there and it was a constant battle to get anyone to work together. It hasn’t succeeded by its own measures, or anyone else’s.”

In the early years of CTW, only SEIU displayed much of the promised membership growth CTW was supposed to foster. Between 2006 and 2008, it added 300,000 workers to its ranks. But, in 2009 and 2010—thanks largely to the labor civil warfare unleashed by Stern—SEIU’s average annual growth slowed to 55,000, even with the addition of disputed members of UNITE HERE.

Sandy Pope, the Teamster reformer from New York who is running against incumbent IBT leader James Hoffa, has long been critical of CTW and wary of SEIU influence on her union. If she defeats Hoffa in the mail ballot vote that began October 6, Pope pledges to work for greater labor unity. In her view, Change to Win has done little to promote the kind of bottom up, cross-union solidarity, at the rank-and-file level that embattled unions need.

Six years after its founding, only a handful of the “5.5 million workers” who, according to the CTW website, “united to create Change to Win” even know what it is or why they are in it. In the 1930s, it was the just the opposite: the CIO brand was so strong that even workers unsure about their own union’s acronym proudly identified with the broader industrial union movement.

In today’s very different environment, similar brand loyalty is not likely to arise from an overblown inside-the-Beltway concoction like Change To Win. As union activists learned from the WTO battle in Seattle in 1999, the mass strike activity over immigrant rights in 2006 and this year’s occupations of the Wisconsin state capitol and Wall Street, putting real movement back in the labor movement requires an upsurge from below—not a reshuffling of deck chairs on a second (and even smaller) Titanic.

Steve Early spent 27 years as a New England staff member of the Communications Workers of America, an AFL-CIO affiliate that opposed the Change to Win split in 2005. He is the author, most recently, of The Civil Wars in U.S. Labor (Haymarket Books, 2011) which chronicles the subsequent implosion of labor’s progressive wing.