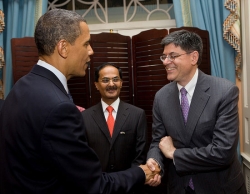 Three months into a bitter strike, the Graduate Students Organizing Committee sent an e-mail to supporters.  “Like their refusal to bargain, their threats last fall, and the docking of prospective pay for striking,” the union wrote, “John Sexton and the NYU administration, aided by former Clintonites Jacob Lew and Cheryl Mills, are again hiding behind a right-wing, Republican NLRB.”

Six years, later, Lew and Mills are back in Washington. Mills is Hillary Clinton’s Chief of Staff at the State Department. Lew reprised his Clinton Administration role as director of the Office of Management and Budget—until last week, when Obama promoted him to White House Chief of Staff.

In 2004, Jacob Lew was the first hire by newly-appointed New York University President John Sexton. Lew served as NYU’s chief operating officer and executive vice president for the following two years, during which NYU withdrew recognition from its graduate student employees union and punished some participants in the ensuing strike. UAW Local 2110 President Maida Rosenstein, whose local includes GSOC, says Lew was “the point person” in “representing management’s position” against the union. (Full disclosure: the UAW is an In These Times sponsor)

“Every single ruthless tactic from the playbook of union-busting was followed at NYU,” says NYU Professor Andrew Ross.  Ross co-edited The University Against Itself, an anthology on the strike.

A White House spokesperson directed an inquiry to OMB Communications Director Kenneth Baer, who e-mailed, “Throughout his career, Jack Lew has been a strong supporter of the right of workers to organize – as has the President. And that belief will not change in his new role as Chief of Staff.” Baer declined further comment.

Spokespeople for the AFL-CIO and for the UAW International Union both declined to comment on Lew’s promotion.

Soon after Lew joined NYU in 2004, a Bush-appointed majority on the National Labor Relations Board issued its Brown University decision denying graduate student teachers the right to union recognition. That was a reversal of a Clinton-appointed majority’s NYU decision, which four years earlier had declared for the first time that graduate student employees were workers covered under the National Labor Relations Act (in the U.S. Senate, Barack Obama and Hillary Clinton both co-sponsored legislation to restore graduate student employees’ rights).

(Full disclosure: My former employer, UNITE HERE, has an organizing campaign among Yale graduate students, which I actively supported as an undergraduate.)

GSOC had won an election in 2001 and, under Sexton’s predecessor, negotiated the first union contract between a private university and a graduate student workforce.  After Brown overturned NYU in 2004, NYU was no longer legally required to negotiate with GSOC - though nothing in the decision prevented it from doing so.  With a year until GSOC’s contract would expire, NYU announced a several-month process of deliberation and community input over whether or not to negotiate a new one.

Instead, in a June memo to the NYU community, Lew and Provost David McLaughlin announced a “proposed decision,” pending a 30-day comment period, that “we should no longer use a union as an intermediary with our students.”  On August 2, NYU indicated to GSOC that it was interested instead in a “new paradigm,” under which GSOC could negotiate over a narrowed range of issues, no one could be required to pay union representation costs, and the university (rather than an arbitrator) would have final say on the resolution of any grievances.  GSOC responded on August 4 by reiterating its request for sit-down negotiations.

In a memo the next day, Lew and McLaughlin informed the public that “the university will not negotiate a new collective bargaining agreement with the UAW.” Lew and McLaughlin wrote that NYU had always maintained as a “core principle” that “graduate assistants are students, not workers,” but had accepted GSOC’s 2001 union recognition vote based on “the UAW’s representation that it would respect the University’s discretion on academic matters.”

They charged that GSOC had abused the contract’s grievance procedure to interfere with “academic decision-making,” and warned that “if even one arbitrator had sided with the UAW in any of these decisions, it would have had a profound impact on our faculty’s academic rights and ultimately the academic quality of the institution.”

“It is both disingenuous and risible,” American Association of University Professors President Jane Buck later retorted, “to assert that the mentoring relationship is harmed by good faith negotiations about salaries, benefits, and access to fair grievance procedures.”  GSOC, while defending the merits of the grievances, had offered three months earlier to drop all of them, and to include language broadening management’s discretion in a new contract.  (NYU did not respond to a request for comment.)

“Our membership, which had been covered by a contract that provided all kinds of rights and benefits, lost that contract, and has had to organize from scratch,” says Rosenstein.

Following Lew and McLaughlin’s e-mail, AFL-CIO President John Sweeney joined GSOC activists in civil disobedience on August 31, the final day of their contract.  In November of 2005, GSOC went on strike to win back union recognition.  On its first day, picketers held “Wanted” posters with Lew and McLaughlin’s faces.  Lew told a campus paper that “it would be a mistake for anyone to draw conclusions” based on the first day of the strike.  “It would be wrong to say nothing is going to happen; it would be wrong to say the place is going to be paralyzed.”

In The University Against Itself, GSOC activist Susan Valentine wrote that NYU campaigned against GSOC with “classic techniques such as interference from supervisors (faculty, in this case) and the threat–and fulfillment–of firings.”  Several aspects of the campaign, Valentine charged, would have been illegal had workers been covered under the Labor Relations Act.  Some faculty complained after discovering on the strike’s first day that NYU administrators were logged in as “observers” on the “virtual classroom” website Blackboard, which could be used to assess which teaching assistants were on strike. GSOC members said they were questioned about their union activity by supervisors.

In the strike’s third week, NYU issued the first of a series of threats that graduate students who remained on strike would be denied work and payment for future semesters.  Over a hundred international students sent Sexton a letter charging that such threats were putting them at risk of deportation. During the first two months of 2006, twenty strikers were fired.  That spring, NYU created a graduate student government which GSOC charged was another attempt at a “company union.”

“Suddenly the business of the university has become strikebreaking and unionbusting, not education,” wrote Cornell’s Kate Bronfenbrenner in January 2006.

The strike drew vocal support from major unions, politicians, and academics.  But when the strike ended in May 2006, GSOC had not won recognition.  The next month, Lew left NYU to become COO of Citigroup Global Wealth Management.

Jared Bernstein, a Senior Fellow at the Center on Budget and Policy Priorities and former Chief Economist for Vice President Joe Biden, told the L.A. Times Friday that Lew is "a mild-mannered guy, but if you want to see him fight, put him in a position where he's protecting disadvantaged people and he'll go to the mat.  That's something you don't see enough of at that level of power."

Interviewed last month, GSOC activist Dacia Mitchell said that one of GSOC’s major focuses since the strike has been electing a Democratic President who would make pro-union NLRB appointments.  A week before Lew’s promotion to Chief of Staff, GSOC received welcome news from the White House when Obama made three recess appointments to the NLRB, averting a shutdown of the agency and raising hopes that the Labor Board will rule on a new election petition filed by GSOC in 2010 and restore the NYU precedent.  Rosenstein, who was active in the GSOC campaign, says Obama “has in general been very supportive of our union, and labor in general.”

Regarding the Lew nomination, Rosenstein says, “That’s Washington politics.  A totally different role.  I have no idea whether he’ll be a good chief of staff or not.”  Asked whether Lew’s role in NYU’s campaign against her union should have been disqualifying, Rosenstein responds, “I would love it if he had a Chief of Staff who had a direct history of being very pro-union.  But he was in charge of the budget at NYU.  Within that context, he did what he did.  Maybe he’s learned something from it.”