Domestic Workers and Their Children March for Rights in Calif. 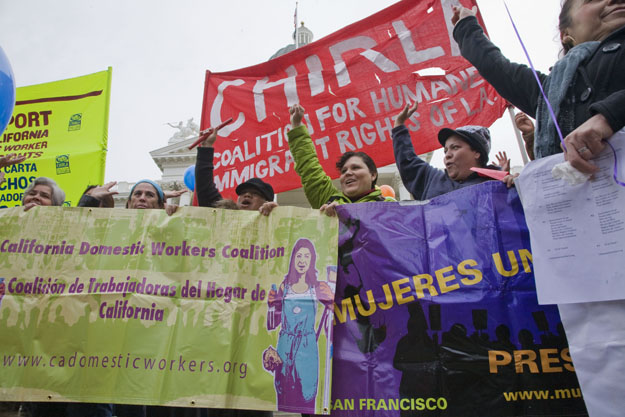 Domestic workers and their children march and rally outside the California state capitol building to urge legislators to pass a bill of rights for domestic workers.   (Photo by David Bacon/All rights reserved)

SACRAMENTO, CALIF.—Early Tuesday morning, buses of domestic workers and their children began arriving at the huge grassy mall in front of California's state capitol building. Dozens of Mexican, Filipina and African-American moms, kids in tow, poured out onto the steps leading into the legislature's chamber.  When the crowd grew to several hundred, they took up their placards, pushed their strollers out in front and began marching around the building.

Some of the kids had clearly done things like this before. One five-year-old raised her fist in the air as the crowd chanted, calling on members of the state Assembly and Senate to pass the Domestic Workers Bill of Rights.  Another girl, who looked about three, knew the chant by heart: "We are the children, mighty mighty children, fighting for justice and our future." She didn't miss a beat, and as one of the organizers held the bullhorn up to her mouth she did a little militant dance to accompany it.

With balloons and even a couple of clowns, it all seemed very festive. But the happy atmosphere didn't hide a more unpleasant truth. Many of the moms there probably see less of their own children than the youngsters they care for. And in the case of those caring for the aged, sick or disabled, the conditions of that work can seem like something a century ago.

Domestic workers often don't get a break to eat, even working many more than the eight-hour workday considered normal for most workers. Others cook for the families they work for, but can't use the same implements to cook for themselves. If they have to sleep in the homes of clients, they often have to get up during the night several times to perform basic services for them, like taking them to the bathroom, or giving them medicine. And the night is considered a rest period, for which they sometimes don't get paid.

One Filipina caregiver from the East Bay explained that she sleeps in the same bed as her client. "What I'd like would be a bed where I could sleep by myself," she said.

Even at five or six, the kids marching with their moms are old enough to understand a little of those bitter truths. When one young girl, who looked about kindergarten age, held up a sign saying "trabajo digno," or "decent work," she knew enough to explain, "she doesn't get enough money, and she works too hard."

Last year the State Assembly passed AB 889, authored by Assembly members Tom Ammiano and V. Manuel Perez, that would give domestic workers some state-recognized rights in their efforts to curb abusive conditions. It would provide meal and rest breaks, overtime and reporting pay as enjoyed by other workers, and expand domestic workers' access to workers compensation. In addition, it would guarantee eight hours of sleep for those who work around the clock, and allow them to use kitchen facilities.

The bill would affect the 200,000 people who work in California domestic service, who are almost entirely women and immigrants or people of color. While domestic workers face the same excuses for substandard conditions faced by other women, namely that they're only working to supplement the income of men, most of them are either the sole source of income for their families, or are bringing home pay that their families can't live without. One woman explained that she was still working many more than 40 hours a week, and was in her 70s.

The Domestic Workers Bill of Rights is modeled on one that was enacted in New York State in 2010.  It is supported by dozens of statewide worker and community advocates, including the California Labor Federation and many other unions, Filipino Advocates for Justice, the Coalition for Humane Immigrant Rights of Los Angeles, Mujeres Unidas y Activas, the Women's Collective of the San Francisco Day Labor Program, a number of churches and synagogues, and Hand in Hand, the Domestic Workers Employers Association. Its main opponent is the business association for agencies that provide domestic workers to clients.

At the end of the last session of the legislature, the bill was in the appropriations committee of the state Senate. The marchers hoped to pry the bill loose, get it passed through the Senate and convince Governor Jerry Brown to sign it.

One of several legislators who spoke to the crowd, Watsonville Assembly member Bill Monning, explained in Spanish, "This bill is just, and we're going to make sure it becomes law and that domestic workers finally get the same basic rights as other workers."