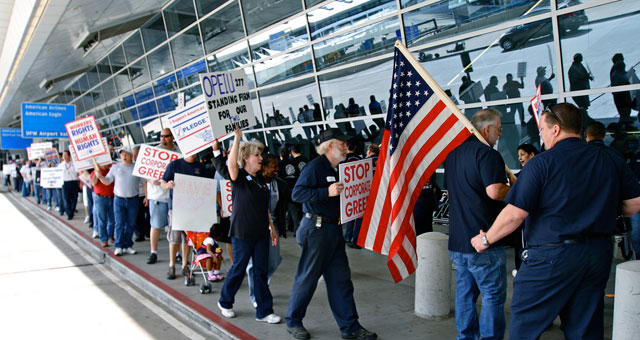 Weeks after American Airlines' parent company AMR submitted a bankruptcy proposal to its three unions, labor and management say time is running out to reach negotiated settlements. Any unions that don’t reach deals with AMR may have their new contract terms, and the number of layoffs, set directly by a bankruptcy judge. The president of the largest of these unions, the Transport Workers Union’s Jim Little, says he expects negotiations will be either completed or abandoned within the next two weeks.

As I’ve reported previously for In These Times, AMR filed for bankruptcy protection November 29, despite $4 billion in cash on hand and newly reached tentative agreements on new concessions in some of its union contracts. Union leaders questioned the motives for the bankruptcy filing, and the company’s then-CEO, Gerard Arpey, announced his resignation the same day as the filing.

Granted anonymity to speak candidly about negotiations, a source close to TWU said AMR appears to be attempting to reach a deal with one of its three unions so that it will have greater credibility against the other two unions before the bankruptcy judge.  This source said that AMR’s efforts initially appeared focused on APA, but those negotiations appear to have stalled, and that with APFA President Laura Glading's ability to reach a deal compromised by a very narrow re-election, a TWU deal now represents AMR’s best opportunity to face the judge with one set of negotiations resolved.  Glading received 51 percent of the vote in a February 24 run-off against challenger Liz Geiss, who had received the most votes in the first round of voting; a Geiss ally was elected as APFA's new vice president.

In a Friday statement, AMR said, “We are disappointed there wasn’t more progress this week at the negotiating table…we continue to lose money as our cost structure is too high and uncompetitive with our industry peers. We cannot sustain this path.”

“Our discussions with the TWU have been constructive,” said AMR, “but there are still major gaps to address.” The company took a harsher tone toward its two other unions.  It charged that APA had not provided sufficient “supporting data to verify the valuation of their own proposals” and that “the savings associated with APA’s proposals fall far short of what the company needs.” It accused APFA of prioritizing an "out-of-town convention" over negotiations and showing “apparent disinterest” in responding to proposals.  An American Airlines spokesperson declined to elaborate on the statement.

Last Tuesday, APA filed a lawsuit arguing that the Railway Labor Act, which governs airline industry labor relations, may supersede the authority of the Bankruptcy Court to determine a settlement.  APA has been in contract negotiations with AMR for five years, mediated – per the RLA – by the National Mediation Board.

“What we’re really trying to do is get the National Mediations Board involved in the process again, because we’re not going to reach a consensual agreement without them involved,” says APA Communications Chairman Tom Hoban. Hoban rejected comparisons between APA contract terms and those for other unions. “We’ve got different responsibilities and duties than a ‘ramper’ who cleans the aircraft,” says Hoban, an American Airlines pilot.

APFA did not respond to a request for comment. But in a Saturday bargaining update, President Glading retorted that AMR has rejected the union’s proposals without offering any counter-proposals and failed to respond to APFA’s information requests.  Golding said that “American’s criticism of the Negotiating Team choosing to attend a Board of Directors meeting is particularly ill-founded,” because “membership ratification is essential to the success of these negotiations.”

Asked whether he agrees that AMR is trying to reach a deal in order to strengthen its position with the other two, TWU President Little says, “I hope so.  I would hope it would be us…we would like to get it, and I’m sure the other [unions] would rather get a consensual deal” with AMR rather than see the decision reach a judge, because “when you put it in the hands of a third party that doesn’t know the job, you don’t know what you’re going to get.”

Last Wednesday, TWU and APFA members held coordinated demonstrations outside 14 airports around the country opposing job and benefit cuts. “This is one of the few jobs that are left with great medical coverage and pensions,” Los Angeles fleet service worker Derek Moore told the local Daily Breeze, “so we want to hold on as much as we can to keep our families safe.”

But even under TWU’s current proposal, workers would experience major cuts. A centerpiece of the TWU proposal is a plan for voluntary buyouts, under which employees could receive a one-time $75,000 severance in exchange for giving up their jobs. TWU says its proposal is similar to buyouts that took place in other airlines’ bankruptcies, and would give some employees the chance to re-train or retire while reducing the number of involuntary layoffs.

In a February 24 statement, AMR said that buyout proposals from both TWU and APFA “represent a significant cost to the company and could not be accepted on their terms,” but “we have a long-standing record of mitigating involuntary reductions through voluntary programs and remain willing to explore alternatives, at the appropriate time in this process, that don’t exacerbate our cost challenges.”

On retirement security, TWU had already reached tentative contract agreements prior to the bankruptcy announcement that would replace pensions with 401(k)s for new employees in some bargaining units.

Asked whether AMR is open to maintaining any of its current pension plans, an AMR spokesperson e-mailed a January 23 letter from Senior Vice President Jeff Brundage.  Brundage’s letter tells employees that even if their pension plan is eliminated, most workers vested in the pension will continue to receive benefits due to the Pension Benefit Guaranty Corporation (PBGC), and employees will have “some form of retirement benefit going forward, regardless of whether the defined benefit plans are terminated or frozen.”

PBGC blasted this statement as "misleading" and irresponsible, and is expected to further amplify its criticism of AMR this month (In These Times will have further reporting on the PBGC this week).

AMR's proposal would terminate 130,000 workers' pensions—the largest such termination in U.S. history.  Rather than terminating pensions, TWU proposes to freeze them, meaning that no additional workers will vest in the pension, and new employer contributions will cease.

Asked whether offering this concession has generated controversy within TWU’s membership, Little says he isn’t aware of any. He says the pension plan was “one of the pillars of what our members wanted us to hold onto” in 2003, and that having maintained it this long has made a great difference in members’ lives. He slams AMR for threatening members’ already-earned pension benefits by proposing to eliminate the pension entirely. “They ought to be putting one of those crime scene tapes around the building,” says Little, “because that’s exactly what’s happening: it’s a crime.”

But asked whether the pension plan, if frozen, could be revived for future workers in future contract negotiations, Little says, “From a personal standpoint, I don’t see that that would be the way of the future…I think defined benefit plans are going to be few and far between.”