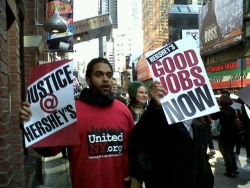 Despite the economic atrophy of the past few years, legions of youth still flock to the United States’ shores each year, hoping for short-term jobs and a taste of the American dream. A new federal audit exposes an industry of guestworker programs that trade on that superpower allure, stringing foreign students on a very thin line between education and exploitation.

Last year's scandal involving student workers at a Hershey plant in Pennsylvania, where young people had been lured in hopes of attaining an international educational "experience," revealed harsh working conditions that eventually drove many students to go on strike. A grassroots campaign led by the National Guestworker Alliance revealed how these “legal” migration channels were promoting labor abuses.

In recent months the State Department, which administers the J-1 Visa program that linked the students to Hershey and its labor contractors, has sought to address loopholes and tighten standards in its guestworker programs, but the administration has received a lackluster report card.

A damning new report by the State Department’s Office of the Inspector General (OIG) confirms what many labor advocates already ascertained: that these programs enable employers access to barely legal bonded labor, marketing bad jobs to young people as an exciting “experience” abroad.

The OIG report states that, in contrast to other guestworker programs, such as the H2B program for seasonal migrant workers, “J visa programs do not require a Department of Labor analysis of American labor market conditions” and “are also not subject to the statutory numerical limitations that apply to H visas.” So compared to other employment-based visas (many of which have themselves been harshly criticized for weak standards), the J-Visa offers firms a convenient escape hatch from regulations designed to prevent employers from undermining domestic workforce standards through importing low-paid labor.

With careful wording, the OIG researchers “[question] the appropriateness of allowing what are essentially work programs to masquerade as cultural exchange activities.”

Far from encouraging mutual cultural exchange, the OIG report argues, the lax policies of the “Summer Work Travel” program, which brought in the Hershey students, allow employers to tap into a year-round stream of cheap, temporary, potentially coerced labor:

Given the different academic calendars in the southern hemisphere and in East Asian countries, SWT is now available year round to students from various parts of the world. Despite the intent that SWT participants fill only seasonal jobs, sponsors have expanded the program to include a wide variety of year-round employment in many unskilled jobs.

Normally, workers in other temporary labor programs are at least on paper guaranteed a prevailing wage, to keep migrant labor from undermining wages and worker protections. But Daniel Costa of Economic Policy Institute told In These Times:

The SWT program has none of those requirements at all – which although are minimal and inadequate – are at least lip service to the interest of protecting wages from being depressed, and in terms of letting unemployed U.S. workers have the first opportunity to take an unskilled job.

SWT employers can just go and get an SWT workforce in a matter of weeks without having to ever advertise their jobs to unemployed US workers in the local area or in the state. SWT employers also save big because they don’t have to pay Medicare, Social Security and state and federal payroll taxes on SWT workers.

As for the cultural value of these jobs, the feel-good principles behind the program have historically proven easily corruptible by job-sponsoring organizations. Just look at the thousands of young foreign workers who’ve spent their summers slogging all day in grueling, poorly paid seafood processing jobs in Alaska—and ask them about their rich cultural experience on the Pacific Coast.

The OIG report points out numerous weaknesses in the Bureau of Educational and Cultural Affairs’ management and oversight of the SWT program. Over the years, the report noted, the program had been marred by “growing law enforcement concerns about the types and location of some SWT employment and related activities.”

Though the State Department has responded to activists with plans to overhaul the program, the report recommends that the program be curtailed overall, “pending implementation of major regulatory change.”

Though SWT is clearly not the only guestworker program that exploits young workers, it’s a case study in how the private sector and government collude to manipulate the nation’s immigration infrastructure.

It all boils down to the logic of the market; rather than upholding its responsibility to protect young people’s rights, the sponsor has a primary interest in capitalizing on their labor.

“The conflict of interest inherent in this process,” said Costa, “creates a financial incentive for sponsors to cover up any bad action by employers.”

For the international students, the greatest lesson of their "work experience" was the savage genius of American industry.