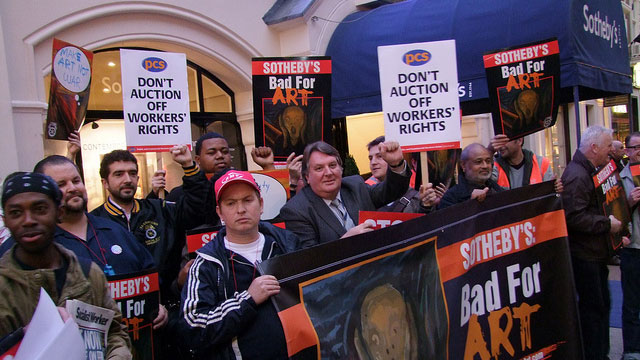 Protesters gather outside Sotheby's in London in solidarity with locked-out art handlers at Sotheby's New York, in October 2011. (Photo by Trades Union Congress via Flickr)

“Tonight, the irony persists,” said Sotheby’s worker Julian Tysh. “Sotheby’s is selling a copy of the scream – an artful interpretation of human anguish and suffering – and they’re going to profit tremendously tonight, while at the same time they continue to create anguish and suffering among their own workforce.”

Tysh and 41 of his co-workers have been locked out since August 1, a month before Occupy Wall Street first occupied Zuccotti Park.  Among labor stuggles, the lockout has drawn some of the earliest, and longest-running, Occupy support. Occupy's involvement has inspired workers, upped the pressure on Sotheby’s, and amplified media attention  – though it hasn’t yet yielded a victory.

According to the Teamsters, the key sticking point in negotiations has been job security.  Tysh was part of a “New Directions” slate that ousted the past leaders of Teamsters Local 814 in the union’s 2009 elections. Tysh, now a member of the local’s bargaining committee, says they inherited an otherwise strong contract marred by a crucial weakness: language allowing some work to be done by temporary workers rather than union members. Tysh says that in the past, management honored a “verbal commitment” that the size of the union workforce would stay above 50 people. When management stopped honoring that commitment, bringing in more temporary workers as the number of union members declined, the contract offered little recourse.

Sotheby's did not respond to a request for comment, but a company spokesperson told Bloomberg in December that the lockout was "the last thing we wanted."

While both the union members and the temp workers are predominately black or Latino, the temps are much younger than the union members. Their wages and benefits are much worse. Tysh charges that Sotheby’s has been exploiting the contract's weakness to replace union art handlers with a cheap, constantly insecure workforce: “The newer generation, because of this revolving door, has only seen six months of a job and then they’ve been back on the street.”

In negotiations, the Teamsters proposed to restrict Sotheby’s ability to replace them with temps. Sotheby’s proposed to expand it. “This is not about economics,” says Tysh, “because this is a very profitable company. If they wanted to bargain for economic concessions, they would have.” Rather, he charges, Sotheby’s mounted “a strong-arm attack from the very beginning: that the union had to accept these terms that would cripple the union’s power on the job, or else we’d have to suffer.”

Bloomberg reported that a Sotheby's filing showed that the company issued its chief executive $4.25 million in 2011 in "performance share units," which vest over four years if he meets "performance goals."

As Mike Elk has reported, in recent years employers have increasingly turned to lockouts: refusing to let union members work until they accept contract concessions or dissolve their union. For Sotheby’s workers, Tysh says that’s meant “tremendous economic hardship,” especially since the termination of their health insurance January 1.  According to Tysh, one of his co-workers had a wife on life support when Sotheby's cut off their insurance.

Tysh says the lockout also takes an emotional toll: “You get a lot of your sense of identity, and your sense of pride as a human being, from the work you do, and it’s hard to call yourself an art handler if you haven’t handled any art in nine months.”

Labor and Occupy push back

Pickets like Wednesday’s have become a common sight, supplemented with more disruptive tactics. Some invited guests at a February 29 reception for the Whitney Biennial—of which Sotheby's is a major sponsor—brought Teamsters and other activists along as their guests. Once inside, in the middle of the event, workers and occupiers dropped banners (including "Quit Sotheby's") and began a “Mic chec,” with a crowd repeating speeches condemning Sotheby's.  During a November auction, Occupy activists and members of other unions – but not Sotheby's employees – sat down and were arrested for refusing to leave the building.

Those arrests illustrate one of the dynamics in play: As amended by Taft-Hartley and interpreted by courts, federal labor law significantly restricts the ability of workers to demonstrate en masse or disrupt production without risking crippling fees or injunctions against their union.  Occupy activists don’t face the same restrictions.

Tysh says the occupiers have “on their own, taken the initiative to engage in a wide range of tactics…we thank them tremendously for that.”

Speaking for himself, Aaron Gemmill, an activist with Occupy Wall Street’s Arts & Labor group (technically a sub-group of the Arts & Culture Working Group), said there’s room to take that freedom further: “We have some flexibility as non-organized people to act outside of that legal framework, but I'd like to see it get pushed a little...I would like to see us doing more bold intervention.”

Tysh says union members are also taking "the type of militant action that you haven’t seen in the labor movement in a long time...We haven’t asked our members to willfully break any laws, so what we’ve done has been within the confines of what we can do, but at the same time it has been pushing the envelope.”

The Teamsters and their allies have also targeted Sotheby’s on other fronts. The union, and the Change to Win federation (with which it’s affiliated), have raised questions about Sotheby’s governance, most recently in a letter to shareholders from the CTW Investment Group.  The letter charges that since Sotheby’s went public, there’s been little change in the composition of its Board, which remains stacked with allies of its president. Gemmill credits union scrutiny with forcing the resignation of Rupert Murdoch’s son, James Murdoch, from the Board.

Sotheby's annual meeting will be held tomorrow. CTW Investment Group is urging investors to vote against the re-election of three board members, including Diana Taylor. Taylor is the girlfriend of New York City Mayor Michael Bloomberg and also a board member of Brookfield Properties, which owns Zuccotti Park, from which Occupy was evicted in November. In a December confrontation with Occupy activists and Teamsters, Taylor threatened to quit Sotheby's board if its CEO "accedes to any of your demands."

In February, students and workers protested a meeting of the University of Vermont's Board of Trustees, which includes Sotheby's Chief Executive William Ruprecht. The same month, anonymous activists created a prank website claiming that the Whitney Biennial was cutting ties to Sotheby's. In April, union activists in Cambodia held a press conference tying the lockout to Sotheby's refusal to return an allegedly looted 10th-century Cambodian statue. On May 1, the editors of two art blogs and a group of artists (including "Hope" artist Shepard Fairey) launched a petition to Sotheby’s that has drawn international art world support.

Gemmill says Arts & Labor activists have connected with the Sotheby's struggle in particular because "rather than kind of abstract arguments for economic justice, it is really is specific to an industry that we all work in and understand, and feel potentially affected by in a direct way.”

The resolution of the fight will also shape the direction of a divided industry. Tysh notes that while art handling for major facilities is mostly union, the rest of the art transport industry is mostly unorganized.

An art handler for Phillips de Pury & Company, a nonunion auction company, says he and his co-workers face erratic scheduling, insufficient staffing and unaddressed safety issues (Phillips' Chairman Simon de Pury stars as mentor to contestants in the reality TV show Work of Art).  This employee—who requested, and was granted, anonymity based on fear of retaliation—says during years of working at Phillips he's requested a raise "several times" but never received one.

"It's a little bit of a dead-end industry, if you can't find a place that will allow some sort of upward mobility. You could do the same thing for years and maybe not get a raise for it." He says Phillips keeps workers below full-time hours whenever possible to save money. He and his co-workers string together work at at several places in the industry, sometimes working close to 24 hours in consecutive shifts. He has no health insurance. Some of his co-workers at Phillips have crossed the Sotheby's picket line to work as replacement workers for extra cash.

Nine months into the struggle, Gemmill says “it’s not clear really that we are closer to victory.”