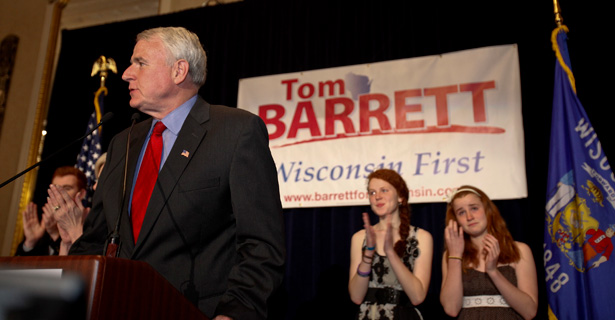 There's no point mincing words: By rejecting the recall of Republican Gov. Scott Walker, Wisconsin voters dealt a nasty blow to organized labor and progressives in the state and beyond.

That was especially true since Wisconsin unions and liberals picked this particular fight, even if it was a justifiable but politically risky response to the governor taking away the rights of public workers.

Quickly, right-wing leaders and commentators—and even some liberals—declared the vote the death knell of unions, especially in the public sector, and a public legitimation of hard-line anti-union strategies. And it could turn into a PATCO moment—when Ronald Reagan fired striking air traffic controllers—if organized labor and its allies fail to launch an effective counter-attack on behalf of not only labor rights but more broadly economic justice and democracy.

But single victories rarely translate into triumphal waves. The right reads too much into their win. Few Republican governors would like to undergo the protests Walker has faced, even if they keep their office.

Yet a strong trend has emerged among both Democrats and Republicans toward attacking public employees, following the successful decades-long offensive against private sector unions. And the Supreme Court's Citizens United decision will keep the floodgates open to the gush of money from right-wing billionaires that gave Walker an overwhelming financial edge (perhaps eight to one).

The recall vote "was not the end of something but the beginning," AFL-CIO President Richard Trumka said, referring to a "new model" of labor and community mobilization, a new determination "to hold politicians accountable," and an emerging movement for economic justice.

Labor and its progressive allies are hardly dead after Tuesday, but they need to take the defeat seriously. They could start by acknowledging that many unions have failed to educate and energize their own members adequately and that much of the public, including even theoretically friendly politicians, do not appreciate—or feel any benefit from—a shrinking, sometimes insular movement.

In these hostile times, unions need to pre-emptively create broad coalitions—such as Wisconsin formed in reaction to Walker—and more means of outreach to educate the public, especially the working class, about how our society fails to work for the 99 percent and why unions still play a crucial role at work and in politics.

Some implications of the recall vote are murky because the factors in the election are complex. For example, Walker kept his office by a larger margin than when he first won a year and a half ago, but Republicans lost control of the state Senate when one Democrat won in a recall contest. (That opens up a way to stop much of Walker's agenda, but the Senate will probably not meet until next year.) That slightly tempers the loss.

Also, although labor unions and many supporters saw the recall as a referendum on labor rights, Democrats and Barrett himself downplayed public workers' rights in the recall battles, with both parties emphasizing other issues. That makes the meaning of the vote less clear—in contrast with voters' strong rejection of S.B. 5's anti-labor provisions in Ohio.

Also, 60 percent of voters in exit polls said they thought a recall was appropriate only in cases of misconduct. That reluctance to recall showed up in last year's Senate campaigns and constitutes one of the main reasons Walker won.

Wisconsin voters were deeply divided on public workers' union rights and somewhat at odds with themselves. In exit polls, by 51 to 45 percent, voters expressed a favorable view of public employee unions, but by almost inverse divisions—52 to 47 percent—they approved both limiting collective bargaining and how Walker handled collective bargaining. Nationally, however, a New York Times poll in February 2011 found Americans opposed taking away collective bargaining rights by 60 to 33 percent.

Even though the anti-Walker movement lost this fight, it is still alive as a movement, including new or revitalized organizations like We Are Wisconsin and Milwaukee-based Wisconsin Jobs Now.

"The story of Wisconsin is the story of fighting back and the force of mass offensives," says SEIU Healthcare Wisconsin Vice President Bruce Colburn. "Wisconsin set a good example of that willingness to take on that fight," possibly giving other, less ideological governors than Walker pause about following his path.

But membership in public employee unions has dropped. The Wall Street Journal reports AFSCME in Wisconsin has declined from 62,818 in March 2011 to 28,745 in February 2012, though AFSCME disputes those numbers. Meanwhile, SEIU has lost some government members and is likely to lose many more in 2014 when its contract with the University of Wisconsin expires, and with it, their right to bargain a new contract. So far, few unions have re-organized their workplaces to prepare workers to act collectively even without bargaining.

The right also used Wisconsin as a test for developing its political "ground game," which some reports described as rivaling labor's own infrastructure. While some pundits see dangers that Obama could now lose Wisconsin, which he won by a large margin over John McCain in 2008, the exit polls showed Obama favored over Romney by 51 to 44 percent. The presidential race will likely be tight, but Walker's victory does not pose a great setback for Obama, except for motivating the far right and for stimulating development of field operations.

Unlike the Republicans, the national Democrats and Obama stayed relatively distant—with the president's main, pathetic role consisting of sending out a tweet at the last minute in support of Barrett. This strategy of avoiding an intensely felt but probably losing candidacy may be smart, if not particularly principled, politics on the part of Team Obama, but to the extent that it sets back labor unions, it hurts Democratic electoral prospects.

More important to the state of the union, if not the president's campaign, declining unions are implicated in rising inequality, worse health, and weakened democracy.

Do even union members realize that? Searching the beer and brat leftovers of Tuesday night for clues, the answer is yes—and no.

Union members and their households turned out only somewhat more forcefully to vote than non-union voters. According to exit polls, 17 percent of voters were union members, though in 2011 they constituted about 13 percent of the state's workforce, and they voted 71 percent for Barrett, 28 percent for Walker.

Measured against usual performance, public workers were, not surprisingly, strongly for the recall. While some association with a union seemed to have significantly influenced voters to oppose Walker, a large bloc of union members was not moved by Walker's attack on unions—including people who object to unions, hold a right-wing worldview, vote on specific social issues or otherwise part company with their union.

The weak support for the anti-Walker campaign from other, non-union workers is more of a problem, since they form a bigger share of the voters.

Overall, Barrett won a few distinct groups of voters—the poor, the very educated, the young, minorities, single women (and union members). He lost the wealthy. He also lost the non-college educated (56 to 43 percent), and he split whites making $50,000 or less evenly. But despite attempts to work with these voters, such as the AFL-CIO's Working America organization, many of these non-union but working-class voters simply don't identify with the labor movement.

Looking ahead, both sides are geared up for the November elections, and voters are energized, says Rob Zerban, challenger to Republican budget chair Paul Ryan in the southeast corner of the state.

Though encouraged by the state Senate recall victory within the Congressional district where he is running, Zerban says, "The races are different. But anytime there is more participation by Democrats, it's a good sign." He does not believe Walker's victory will hurt his campaign.

The recall fallout can—and must—be contained. But it will take more serious member education, mobilization and the creation of meaningful coalitions that reach out more broadly than has happened before.