4 Reasons Chicago’s Teachers Are On Strike 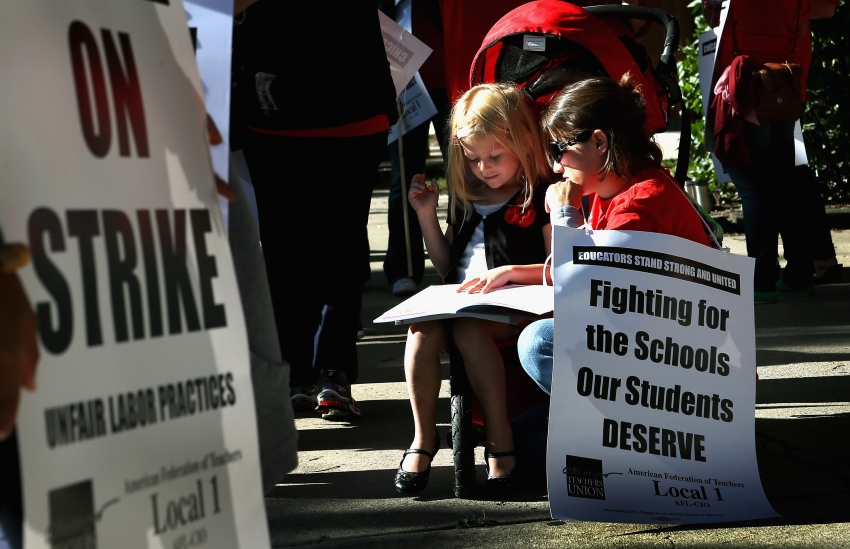 Across mainstream media and through the megaphone of city government, Chicago Public School (CPS) teachers have been consistently demonized and criticized for everything from self-serving greed to negligence of their duties to lack of care and respect for students.

Mayor Emanuel and his hand-picked school board—stacked with millionaires and former charter administrators—along with CPS CEO Jean-Claude Brizard, have continued to use their dominion over the school system to apply a corporate model of school reform to the Chicago Public Schools.

This type of “reform” has allowed private operators to take control of public schools, undermine the teachers union, close and turn around neighborhood schools rather than invest in them, and over-test students rather than provide them a comprehensive and nurturing education.

Meanwhile the Chicago Teachers Union, numbering nearly 30,000 members, is demanding that CPS cease this drift toward putting control of schools in private hands, and provide the necessary conditions for effective and equal public education—putting the needs of students ahead of corporate and government powerbrokers.

So what are the teachers fighting for?

A better school day: A comprehensive education including not only curricula in math, science and history but also art, music, physical education and foreign languages in all Chicago Public Schools.

Wraparound services and adequate staffing to support students in need: This includes counselors, social workers, librarians and school nurses with defined job descriptions as well as preparation and break time.

Recall rights for educators and school staff: Hundreds of teachers have already been displaced by school closures across the city and more will be by the planned closing of at least 100 more schools in the coming years.

Fair compensation: No merit pay, less reliance on standardized tests and pay commensurate to increased time in the classroom as well as inflation. CPS reneged last year on the contractually obligated 4 percent pay raise negotiated in 2007 and is currently offering annual 2 percent raises over the next four years. An independent fact-finder’s report released in July recommended pay raises of 15-18 percent next year.

There are of course many other points of contention in negotiations, but these demands represent the core reasons that 98 percent of the CTU membership voted to authorize a strike. They represent the contours of a larger struggle against the neoliberal model of corporatized education being pushed by Emanuel, Brizard, Secretary of Education Arne Duncan and their ilk.

As CTU President Karen Lewis proclaimed to a massive crowd of thousands of teachers and their supporters at a Labor Day rally in Daley Plaza, “This fight is for the very soul of public education, not only in Chicago but everywhere.”

The American Federation of Teachers—the nation’s 1.5 million-member education labor union, which has been complicit in corporate education “reform” in the past—has come out with a statement of support for Chicago teachers. President Randi Weingarten says: “Chicago’s teachers want what is best for their students and for Chicago’s public schools… The AFT and its members stand with the CTU.”

Cross-posted from the Occupied Chicago Tribune.