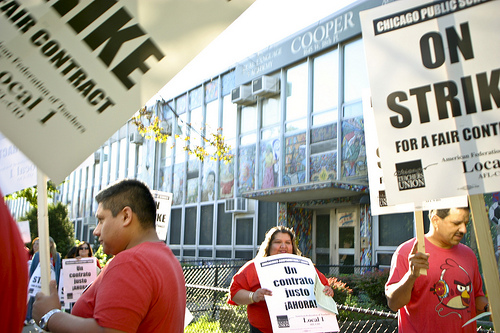 Early this morning, Chicago teachers organized picket lines at all entrances to William H. Ray Elementary School in Hyde Park on the city's South Side. They were joined by dozens of students, parents and local community residents. It was the first day in 25 years that the Chicago Teachers Union (CTU)--the first teachers union in the country--had gone out on strike, and picketers banged drums, gobbled doughnuts, waved at passing motorists (and the driver of a passing waste truck), and chanted with militant cheeriness: "Lies and tricks will not divide/parents and teachers side by side."

Late Sunday night, the union leaders decided that, despite some progress in the nearly year-long contract negotiations, the school board had failed to satisfy the union's 29,000 teachers and support staff in several key areas.

CTU president Karen Lewis, leader of an internal reform movement that took the union's top offices in 2010, said the offer from Chicago Public Schools (CPS) did not preserve medical benefits and did not provide adequate job security in a system thrown into turmoil by school closures and charter school openings. CTU also objects to a new system for evaluating teachers that relies heavily on improvement in student test scores.

Lewis said the two sides are not far apart on the issue of pay, including compensation for a longer day that CPS imposed this year. Sources differ as to the amounts on the table: Mayor Emanuel said the board offered a 16 percent raise over four years; board president David Vitale described the proposal as 3 percent in the first year, then 2 percent each of three following years; and the CTU characterized neither its latest proposal nor the CPS response.

But at its heart, the strike is over the union's deep opposition to what it calls a "corporate reform agenda" that pursues a competitive or punitive relationship with teachers, rather than a collaborative one. Examples include blaming teachers and unions for educational shortcomings, promoting private but publicly financed charter schools, focusing on high-stakes tests and tying pay to merit.

CTU has instead pushed for smaller classes, enriched curriculum, better supplies and facilities, fairer and fuller funding (including the return of some public revenue long diverted into "TIFs" to subsidize developers), more counselors and support staff, respect for teacher professionalism, and a bigger say for teachers in their schools.

That clash puts the union at odds with CPS, the mayor and President Obama--whose education secretary, Arne Duncan, boosted the corporate-reform agenda as former Mayor Richard M. Daley's school superintendent. It also represents a more forceful rejection of such reforms than espoused by the national union, which nonetheless supports the CTU strike.

Unfortunately, CTU's leaders have not pierced effectively through the cloud of misinformation coming from the mayor and allies (including groups with a financial stake in charter schools) to make clear what they're for and against. Also, a new state law limits the union's ability to negotiate many of the most important policy issues.

But Emanuel's unpopularity among unions has lifted union support, including backing from UNITE-HERE members working in the school lunchrooms, who offered to join teacher picket lines even though the food workers' earlier negotiation of a contract precludes their joining the walkout.

Emanuel said the strike was unnecessary, unwanted (by him), and wrong--"a strike of choice."  But one teacher tells In These Times it was virtually inevitable given Emanuel's insulting, disrespectful attitude towards teachers and the union, his unilateral imposition of major changes without consultation and his hostility towards most public schools. I asked John Cusick, a union delegate who has taught fifth grade for 12 years at Ray School, what he thought of Emanuel calling teachers' action a "choice," not a necessity. After a long pause, he said, "We don't have a lot of choices in CPS. We had no input into the longer school day. We're given no input into how the day is structured. We're given no input into whether the barrage of testing our students are undergoing makes sense. We have no choice in electing a school board. That's a choice we'd like to have."

Instead of experienced professionals having a voice, the board consists of rich people such as billionaire hotel heiress Penny Pritzker, whose businesses benefit from TIF funds that divert money from schools. Meanwhile, she sent her children to the private University of Chicago Lab School (as Emanuel now does), which she praises for its generous, well-appointed facilities. Lab is a few blocks from Ray (a fine public school that my kids attended), but worlds apart in amenities.

"We'd like to be involved in discussing class size," Cusick adds. "We'd also like more social workers and youth guidance counselors. We'd like to be funded to the hilt like [the rich northern suburb of] Winnetka. Last year Ray had classes with as many as 41 students. Let's have those choices."

And beyond those strictly educational policy choices, there are the critical environmental issues--violence and poverty. "We do think there's a crisis in American education," Cusick says, "and it has to do with poverty, but officials offer charter schools. In ten years they'll realize charter schools don't solve the problem. We don't need quick fixes. We need long-term commitment and investment."