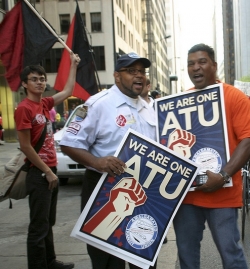 Local 241 of the Amalgamated Transit Union, which represents Chicago bus and light-rail workers, is marching, lobbying and fundraising for the teachers' strike.   (Chicago Teachers Union / Flickr)

For striking Chicago public-school teachers, who are now headed back to the negotiating table, public sentiment has been crucial. All strikes are political, even those that aim to inflict economic costs on a private employer, but public-sector strikes are especially so. While members of the public bear the hardships of the strike, they can also be natural allies for advocating improvements to public services such as schools.

A clue to city sentiment could be found on Monday, as more than 20,000 red-shirted, striking teachers and their supporters flooded downtown Chicago. They spilled over the rally space into the adjacent streets, which are home to the city's political and financial power elites. Unlike most demonstrations, however, the police moved out of the way. As one group of strikers and supporters crossed the normally heavily traveled street, a cop shouted out, "Go get 'em, teachers."

By "them," he most likely meant those politicians and financiers, united in promoting a "school reform" agenda that has proven deeply flawed in theory and practice but is embraced by many elements of both political parties.

The cop's shout-out was a common, if not universal, sentiment in Chicago--perhaps strongest among embattled public employees like the police, all of whom face hard fiscal times and a hard, hostile mayor, Rahm Emanuel.

A plurality of registered Chicago county voters polled by McKeon & Associates supported the strike--47 percent in favor and 39 percent against, with 14 percent undecided. Nearly three-quarters judged Emanuel's performance as either average, below average or poor.

Similarly, a Lake Research Partners poll last spring commissed by the Chicago Teachers Union  showed the public trusting teachers over the mayor on education policy. The polls may indicate that the public prefers the teachers' vision of an enriched public school curriculum over the city's pro-corporate, privatizing agenda.

But 33 of 50 city aldermen--including many supported by labor or claiming to be independent or liberal--signed a letter this weekend asking CTU president Karen Lewis not to strike, taking a stance at odds with popular sentiment and with their putative progressive principles.

For many workers and union members, including a long roster of labor leaders who gathered to support the teachers after another huge rally on Tuesday, the issue was solidarity among unions in a rare major strike. In attendance were the national and Illinois presidents of the American Federation of Teachers (Randi Weingarten and Dan Montgomery), Chicago Federation of Labor president Jorge Ramirez, and leaders of AFSCME, SEIU, Federation of Police, UE, National Nurses, the Amalgamated Transit Union and the separate local for unionized charter school teachers.

The union leaders--most representing public or quasi-public workers--pledged support and defined the key strike issues broadly as the future of public education and the quality of life in Chicago.

"This is about community, labor coming together to support teachers, so classrooms can be as good as they can be, and students can be as good as they can be," Ramirez said. Montgomery pointed out the special legal constraints imposed on Chicago teachers, noting that with fewer restraints on collective bargaining, other school districts and their teachers had negotiated workable evaluation systems, a sticking point in Chicago negotiations. State law prohibits the CTU from striking over evauations, providing an incentive for the school board to cut off discussion and try to unilaterally impose a system.

Recalling the 9/11 attacks on the World Trade Center, Weingarten praised communities coming together, stressed her support of the CTU and urged a settlement, without addressing individual sticking points that prompted the strike. Most union leaders also avoided direct responses to reporters' questions about the political complexities of a strike that challenges educational policies pushed by Obama, whom they hope to re-elect.

SEIU Illinois-Indiana healthcare division president Keith Kelleher touched on the politics briefly, praising much of Emanuel's Democratic convention speech, then pointedly saying to the mayor, "You can't be a Democrat at the national level and a Republican at the local level"--skirting the obvious question of what it means to be a Democrat nationally on education. (President Obama and his education secretary, Arne Duncan, promote charter schools, high-stakes testing, and other element of corporate reform that have largely proven misguided in theory and failures in practice.)

Nor did many union leaders give specifics as to how they would show solidarity beyond their statements. SEIU Local 1 president Tom Balanoff announced that many of about ,1500 custodians who work for private contractors at CPS buildings had asked not to cross teacher picket lines, and the union had sent 48-hour notices of their intent.

Other direct CPS employees who have contracts with other unions can't cross picket lines, but some labor activists questioned why a couple of unions settled contracts just recently with a strike imminent.

But teachers at Talent Development High School, a charter school located inside Crane High School but represented by a separate AFT local, has suspended classes in solidarity with CTU and over some similar issues.

And the small but fervent support groups from the wider community and from parents are considering direct actions in the manner of the Wisconsin uprising or Occupy Wall Street. Chicago's teacher strike--and the broader solidarity around it--could become the next big demonstration of the potency of bringing together worker and community interests.

Meanwhile, as CTU leaders return to talks today, they do so with their city behind them and with broad (if sometimes vague) support from labor.