Strike Continues As Chicago Teachers Do Their Contract Homework 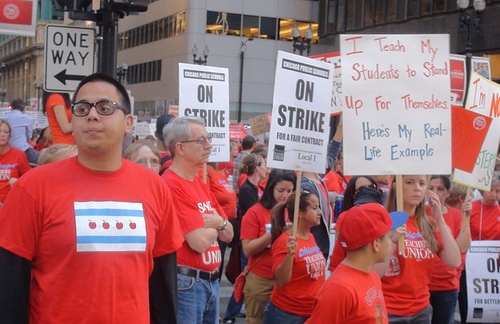 Caption: Teachers return to the picket lines through Tuesday to confer about the city's contract offer.   (firedoglakedotcom / Flickr / Creative Commons)

Demonstrating their belief in union democracy and their distrust of Chicago school officials, the approximately 800 Chicago Teacher Union delegates voted Sunday to continue their strike for at least two more days to give the union's 29,000 members time to study and discuss a tentative contract.

And demonstrating his own intolerance for both unions and democracy, Mayor Rahm Emanuel promptly reacted by seeking a temporay restraining order to halt the strike on the grounds that it is illegal and endangers the health and safety of children. However, a Cook County judge rebuffed his request for an immediate hearing, saying that one could be scheduled on Wednesday if the strike was still on.

Many Chicagoans had expected the teachers to return to work Monday, then send the contract to union members to ratify. But four things gave the delegates pause: The issues in the contract negotiations were complex, the details important to teachers and staff, the anxieties over job security high, and trust in the mayor and his appointed school board extremely low.

In the battle for public support, Emanuel's apparent bid to be the Democratic double for Scott Walker--the staunchly anti-union Republican governor of next-door Wisconsin--may backfire. Rahm's attempt at a legal block could help to sustain public support for teachers, which has been high since the strike started a week ago, even though many parents would have liked to send their children to school today.

Union members "are not happy with the agreement," CTU president Karen Lewis said after Sunday's delegate meeting. "They'd like it to be a lot better for us than it is."

Lewis, who said that as "spokesman" for the members she refused to be a "marketer" of the tentative agreement, had her own reservations about a contract that, almost inevitably, "does not solve all the problems."

"This is the deal we got," she said. "This is not a good deal by any stretch of the imagination." But the leaders brought it to members despite the shortcomings, vice-president Jesse Sharkey said, because "it was the best we could get."

But teacher anxiety and hesitation, Lewis said, spring from two sources--their profound distrust of Emanuel and Chicago Public School (CPS) leaders, and their worries about school closings and job security.

"The big elephant in the room is the closing of 200 schools," Lewis said, though CPS does not acknowledge such plans. "It undergirds nearly every thing we've talked about."

Each side laid its claims to victory: CPS officials touted retention of Emanuel's longer school day and year, preservation of principals' right to hire and fire teachers, and the inclusion of student test score improvement as a part of teacher evaluation. They also won some battles they did not trumpet, such as eroding or eliminating many other provisions of the previous contract and retaining unlimited power to introduce charter schools.

The union, despite Lewis's comments, did score important gains and limited management initiatives, often gaining trade-offs that teachers may find acceptable on balance. Here's a partial accounting of union victories or partyial victories on some key issues:

The CTU house of delegates will meet again Tuesday to decide whether these gains warrant suspending the strike.

Even if the contract does not solve all of the school system's problems in a way that completely satisfies teachers, CTU's hard bargaining resulted in a big setback for the school-reform privatization movement that may stiffen resistance by teachers elsewhere. And in Chicago it has given a boost to parent-teacher alliances--for example, the union bargained for a parent representative to sit on a new commission on class size.

For all unions, CTU's effort also represents a victory for union democracy and an inspiration for standing up to employers. The president of Chicago's SEIU Local 1, Tom Balanoff, whose Houston chapter recently won a better contract for janitors after a large strike, looked out at the sea of red shirts and said with a big smile, "We've got to have more strikes like this."