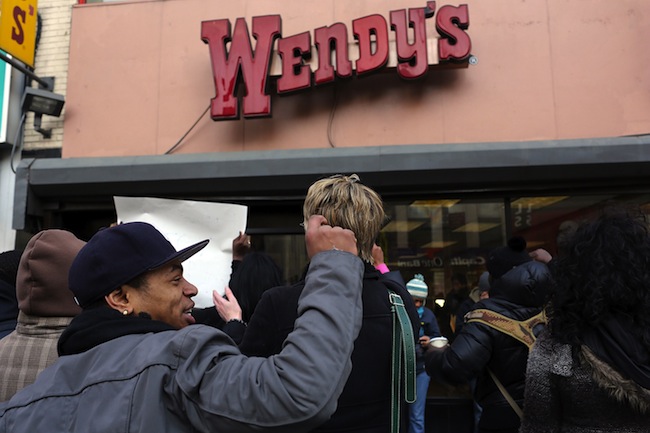 Two hundred workers from dozens of fast food outlets in New York City—including McDonald's, Burger King, Wendy's, Domino's, and Taco Bell—walked off their jobs Thursday morning to demand $15 an hour in pay and the right to form their own independent union, according to the organizers of Fast Food Forward.

It is the largest strike ever in the United States against the $200-billion-a-year fast food industry and represents the latest in a wave of collective actions by low-wage workers to change conditions in their industries and, in many cases, to form unions.

Before Thanksgiving, fast food and retail workers in the posh North Michigan Avenue shopping district in Chicago launched a new union with protest marches. This year, warehouse workers, mainly for Walmart, have expanded organizing and conducted successful strikes. On Black Friday, roughly 500 Walmart workers nationwide refused to report for work and protested alongside tens of thousands of supporters. Retail workers in New York have launched a fight for "sustainable scheduling," and car washers from Los Angeles to New York have joined or launched unions.

Workers in these and other low-wage occupations have long endured poor and unpredictable wages, few or no benefits, erratic scheduling, arbitrary treatment by supervisors and a lack of voice at work. But the recession—and the economy emerging from it—has given added urgency to workers' discontent. And increasingly, middle-income workers find themselves driven into precarious jobs, the fastest-growing segment of the job market.

Nationwide, NELP reported, 43 percent of job growth during the past two years came in just three low-wage industries: food, retail and employment services (such as staffing agencies), all targets of the new organizing.

Bill Young, 26, went on strike from a McDonald's near 40th Street and Madison Avenue in Manhattan. "It's kind of hard dealing with things on a low income," he said. He makes $7.25 an hour, and unlike many fast food workers he typically works 40 hours a week, even though his work hours are erratic and can be spread over six or seven days of part-time work. "If you think about it," he said, "it's still not enough" to pay rent ($550 a month, nearly half his pre-tax income), help support his two children (one of whom lives with him), and meet other basic expenses.

"It's the money," he said, explaining why he is striking and wants a union, "but it's also the favoritism, no benefits, the schedules—our schedules change every week. It's hard for me to go back to school or get my daughter."  A high school drop-out, he wants to go to culinary school, but he can't due to McDonald's erratic scheduling. Young also says his manager makes employees do many tasks "off the clock," illegally forcing them to work without pay before or after punching in. (According to a second employee, the manager  has been fired.)

Fast Food Forward started organizing among the 50,000 fast food workers in New York City at the start of the year. Its sponsors are community, labor, clergy and other groups, including United New York (a coalition), Service Employees International Union (SEIU), and New York Communities for Change, a successor to the defunct community organization ACORN and the main organizing force for Fast Food Forward and in the formation of unions to lift up standards for the burgeoning low-wage economy. "We can't wait for the economy to produce better jobs," said Jonathan Westin, the lead organizer on Communities for Change's fast food worker campaign. "The economy won't grow as long as people's paychecks are so low. It's that simple."

In Chicago, where the proportion of the workforce holding low-wage jobs has increased by nearly a third over the past decade, a campaign to organize both retail and fast food workers in one dense, upscale commercial district started earlier this year, thanks to a similar coalition involving SEIU and two closely-aligned organizations, Stand Up, Chicago! and Action Now, a community organization focused primarily on issues of lower-income working people. On Nov. 15, about 150 workers from fast food and retail stores located in the North Michigan Avenue area formally convened the Workers Organizing Committee of Chicago (WOCC) to organize and create a new independent union. They also launched a "Fight For Fifteen" campaign to establish a $15 minimum wage, at least in that area. They marched through the shopping area, then returned on Black Friday for protest actions along the avenue and into the stores, but did not call for walkouts. Inside Water Tower Place, a vertical shopping mall, demonstrators unfurled a banner reading "$1.5 billion"—the sum made last year by CEOs of the companies targeted by the actions, according to WOCC.

The New York and Chicago organizing projects get support from unions, but community groups and workers in the restaurants and stores do most of the organizing work, and they intend to create new, independent unions and set standards for a geographic and occupational market. But even with this strategy, which to some extent could take wages out of competition in a local market, organizers face the problem of extremely high turnover in the workforce, making it harder to organize than in many more stable workplaces.

Some of the new low-wage workers lost their former jobs in the Great Recession. Amie Crawford had been an interior designer for 35 years, but at age 56 found herself working for $8.25 an hour, the state minimum wage, at The Protein Bar in the North Michigan Avenue district. "I'm just myself, and I can't make ends meet," she said. She decided to work to raise the minimum wage and discovered Action Now, which has been a local leader in campaigns for a higher minimum wage and living wage for government subsidized firms or contractors.

Working with Action Now and a small band of younger fast food and retail workers in the North Michigan Avenue district, Crawford then helped put together meetings of workers in her area. "There was so much passion in the stories that we told each other," she said. "If we came together as a group, we might change things. Individually, it's hard to get things done....It was so moving to give birth to an organization like this. Maybe I'm just a child of the sixties, but it's inspiring."

In New York, Raymond Lopez, 21, a shift manager after 2.5 years at a McDonald's in Midtown, also has to work a part-time job to supplement the $8.75 he makes at McDonald's. Still, "that's not enough to make ends meet," he said, especially when he's paying $600 a month in rent for his single room. "These companies could pay more, a reasonable wage, and still make money."

Although he was off work today, he still considered himself one of the 14 or so strikers from his McDonald's, which has about 40 total employees. More workers support the idea of a union, he said, but they're afraid of losing their jobs. "I still am a little nervous," Lopez acknowledged in a phone interview from a picket line, but the Walmart strike helped. "We were still going to do it anyway, but it shows it can be done....I'm going to work tomorrow, but there's so much attention to this strike, it would be smart for them not to fire us."

"I know things are not going to change overnight," he said. "One strike is not enough. But we'll go with the flow."