Flammable Material: How Garment Workers Can Respond to the Tazreen Factory Fire 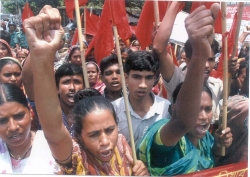 In a fashion industry where trends change by the minute, the lives of the workers who make the clothes are often valued as cheaply as the products they create. The devastating fire at the Tazreen factory in Bangladesh, which killed more than 110 people, is tied to what labor advocates describe as a powder keg: the manufacturing system in the Global South, where countless factories are one spark away from catastrophe.

A new report on factory safety by the International Labor Rights Forum documents the story of one teenager who survived a deadly fire in 2006, which left dozens of workers to burn in a sealed death trap:

I think that they used to lock the doors all the time because most of the workers were my age, and they thought that we might leave the factory any time, as we were kids. That is why they always locked the main door.

Of course, it would be children who lacked the discipline to stay put, whose natural impulse to resist restraint required the industry to literally lock them in.

Today, the charred Tazreen factory represents the extreme end of a long continuum of anti-worker oppression and violence, beginning with multinational brands that build their profit model on cheap overseas labor, to the brutalization of workers who dare stand up for their rights on the job.

The cost of treating these workers humanely doesn’t add up for brand-name manufacturers. The garment industry death toll in Bangladesh has risen to about 700 since 2005, and seems on track to grow as more foreign business flock to the South Asian country for rock-bottom wages and a burgeoning workforce willing to earn as little as $43 a month, far less than typical wages in China or India.

A 2010 raise in Bangladesh's minimum wage was supposed to improve economic conditions, but the ILRF says companies have continued to cheat workers through unfair deductions and demotions. Besides, the ILRF notes, “Spiraling inflation since the 2010 wage increase has further eroded any gain workers might have received,” revealing how little the country’s capitalist development agenda has trickled down to the most vulnerable.

In recent years some activists have tried to push back against the “race to the bottom” in wages and working conditions with the Asia Floor Wage campaign, which would seek to ensure level wage standards across the region. But despite Asian workers’ shared plight of exploitation, competition for capital across countries has stymied transnational organizing. Kalpona Akter of the Bangladesh Center for Worker Solidarity tells Working In These Times via email that while Bangladeshi workers would benefit from a regional floor wage, “many would argue that the competitiveness across the South Asian region has worked in favor for Bangladesh in recent years," by attracting foreign investors, so a regional organizing effort would conflict with the country's industrial "development" interests. In light of the dependence on the export economy, Akter added, "We would need support from unions, NGOs, workers, and civil society throughout Asia to support this. That is a long ways away.”

The very basic problem of fire safety is the byproduct of this feverish drive for profits. Despite flashy corporate responsibility campaigns and ethical-manufacturing codes, companies such as Gap and Walmart have shaped the garment industry to be disastrous by design. According to the ILRF:

Factory fires that kill the workers who make the clothes we wear are not the product of exceptional circumstances. They are not isolated examples of especially greedy or negligent owners or corrupt government officials. ...Instead, deadly fires are the inevitable product of an industry founded on the idea of underpaid and disposable workers.

Meanwhile, the official investigation into the Tazreen fire is already being met with skepticism. The Bangladeshi government has acknowledged negligence at the factory but is claiming the fire itself was sparked by “sabotage.” Labor advocates want to keep the focus on the industry’s history of egregiously unsafe conditions and fair compensation for victims (not to mention, state authorities’ have been known to criminalize workers and activists to suppress organizing).

The recent murder of an intrepid garment-worker organizer, Aminul Islam, has shown how political impunity and corporate power collude to suppress civil society. While violence against labor activists is common, the targeted killing of a trade unionist suggests that hostility to labor organizers is intensifying, and that this pattern is interwoven into the climate of terror that prevents workers from challenging abusive employers.

Since liability for worker safety is essentially atomized across various contractors and regulatory jurisdictions, ILRF proposes an industry-wide fire safety code that would legally commit companies to ensure safer working conditions and to diminish the perverse incentives to capitalize on unsafe factories:

If a factory fails to address a high-risk safety violation in a timely fashion, buyers must, as a last resort, cease doing business with the factory. Buyers must then shift orders from that factory to qualified and safe factories, and make every effort to ensure that workers who lose their jobs in the unsafe factory are offered employment in the safe factories.

More generally, activists want multinationals to wield their political clout to pressure governments in exporting countries to respect workers’ right to organize and to remove barriers to unionization. (Activists report that their organizing drives are actively suppressed by state authorities.)

Akter says that pressing for systemic reforms is extremely difficult when companies can’t be directly held accountable for major labor violations, even in tragedies like Tazreen:

There is no political mechanism in place here in Bangladesh to hold companies accountable. … It is critical however that these companies implement a responsible contractors' policy. This could work to hold companies accountable instead of letting them off the hook because of the inherent disconnect of the supply chain today. In other words, while the supply chain has grown dependent on subcontracting, it is still the company (most notably Wal-Mart for they are the ones who set most industry's competitive prices) that effectively set the standards of wages, health and safety, and productivity in every level of the supply chain.

The ever-expanding movement against Walmart may actually point workers around the world in this direction, tying together sweltering warehouses in California and factory infernos in Bangladesh. Perhaps the seeds of a more systemic workers’ movement emerged in the protests in several countries as part of the recent global day of action against Walmart. But if labor is able to successfully challenge the corporate grip on the supply chain, can workers put forward an alternative vision for a more just manufacturing system? The legacy of labor activists like Aminul Islam--of empowered workers struggling to set their own terms for “development”--will hopefully endure longer than the flash of public outrage sparked by Tazreen's extinguished lives.