Qatar Launches Into 2022 World Cup on Backs of Abused Migrants 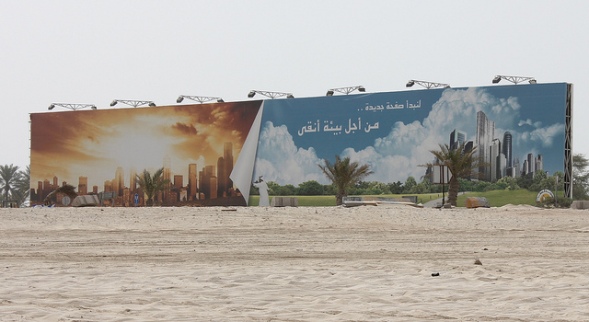 Qatar is a land of contradictions—a metropolis in the desert where exploited migrant labor props up the highest per capita income in the world.   (Cocoate.com / Flickr / Creative Commons)

Qatar sits like an oasis of hypertrophic capitalism amid a landscape barren in all respects except for its oil reserves. The emirate sustains itself by pumping out vast fossil fuel resources while importing human ones, in the form of legions of migrant workers from Bangladesh, Nepal and other Global South countries.

Labor activists say this fierce imbalance between the elite and the laboring underclass is headed for catastrophe as the country prepares to host the 2022 FIFA World Cup.

The event, and the massive infrastructure projects it will involve, will magnify Qatar’s international prestige as an ultra-modern kingdom, but labor and human rights activists say the country is neither ready nor willing to align its regressive labor practices with its ultra-modern development agenda.

An investigation by Equal Times, a publication supported by the International Trade Union Confederation (ITUC), documents patterns of employers and labor agencies cheating workers, deceiving them into exploitative jobs in unsafe and precarious conditions.

In a country where the Gross National Income per capita is well above US$ 80,000, the average migrant worker makes just US$300 a month. Migrants live in squalid conditions and have scant health and safety protection, leading to accidents at work – some of which are fatal. Migrants have no voice to demand better conditions, since they are prohibited by law from creating or joining trade unions. This is a violation of the right to freedom of association and collective bargaining.

Migrants constitute more than 90 percent of Qatar’s workforce, which means that nearly all the people who keep the oil economy running, from the construction crews to the household servants, live in a state of marginality, often reduced to virtual indentured servitude. Now the World Cup promises a flood of investment and a tide of fresh migrant labor, with little sign that exploitation will ease.

Bangladeshi migrants are especially subject both to grueling conditions and to exploitation by shady brokers in the arcane work-permit and visa system, who, according to Equal Times:

buy the [work] permits and sell them on; mainly to private recruitment agencies but sometimes to workers in Bangladesh directly. They also offer to recruit labourers on the sponsors’ behalf.

“It is the Bangladeshi recruiting agents who take an unbelievable amount of money from the migrant workers,” confirms a middle-man who officially works as an executive in a private manufacturing firm.

Since their work authorization is dependent on the “sponsor,” the market for working papers produces endless opportunities for intimidation and coercion, such as employers' retaining workers’ documents to hold them captive.

Many workers see their pay sapped by deductions for basic living costs. In an interview with Equal Times, Bide Majakotias, a migrant worker from Nepal, stated that in his construction job, “We had to bear the cost if we received medical injuries. The manager said workers were responsible for their own safety." As workers were routinely exposed to hazards, such as being crushed when working with towering cranes, Majakotias claimed the management papered over even the riskiest conditions: "They take such cases as normal and just dispatch the worker home as being ill. The dead body is just packed and sent home. If we report the case to [the] company, they yell at us, 'Get out!'"

A recent Human Rights Watch investigation cited cases of workers dying or being injured with little recourse, or even documentation, with “disturbing discrepancies between the number of construction worker deaths reported by local embassies and the number reported by the government”:

For example, the Nepali embassy reported 191 Nepali worker deaths in 2010, and the Indian embassy reported 98 Indian migrant deaths, including 45 deaths of young, low-income workers due to cardiac arrest, thus far in 2012. An Indian embassy spokesperson told local media that heat stroke likely contributed to this unusual rate of heart failure.

Yet in a letter to Human Rights Watch, [Qatari] Labor Ministry officials stated that, “Over the last three years, there have been no more than six cases of worker deaths. The causes are falls.” The lack of any requirement for companies to regularly publish data on worker deaths and injuries contributes to this lack of transparency and information... .

Labor rights advocates fear these abuses will only escalate during the lead-up to the World Cup in the contracted projects of multinational firms. Major construction firms, for example, could benefit from the use of subcontractors that can distance big-name developers from unscrupulous practices on the ground.

However, Qatar's lack of a regulatory and legal infrastructure suggests companies may face few consequences for violations in the production chain, including minimally regulated subcontractors. Sharan Burrow, General Secretary of the ITUC, tells Working In These Times via email that it is unclear whether Qatar will really move toward instituting stronger labor laws by ratifying International Labor Organization conventions and related standards:

The responsibility for workers lies with a country first, which should have laws which companies follow. Qatar takes no responsibility for the 1.2 million migrant workers who are the backbone of their country. It is these workers who are building and growing the country. But out of what looks like pure greed, the Qatari’s refuse give their guest workers even the most basic international rights. Why else would the richest country in the world [per capita] treat workers like slaves?

Qatar has invited companies and football fans around the world to revel in its prominence as host of the 2022 World Cup. The migrants building the spectacle, however, remain the invisible witnesses to a crueler side of globalization in the shadow of the emirate’s towering stadiums.