Grin and Abhor It: The Truth Behind ‘Service with a Smile’ 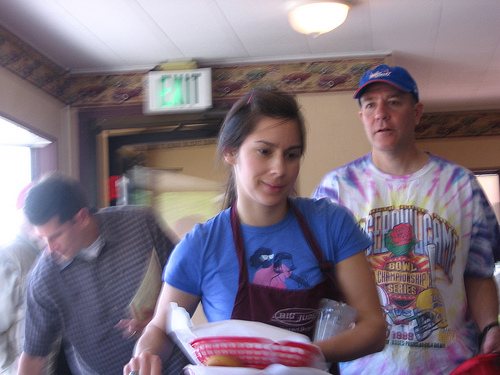 A waitress juggling plates at Big Juds Burgers in Boise forgets to smile--in some restaurants, that could endanger her job.   (Kenneth Freeman/Flickr/Creative Commons)

No, that waitress isn't flirting with you.

Neither is the barista at your local Starbucks, nor the counter server at the Pret A Manger near your office, and you might be surprised to learn that the stripper at your local club doesn't have a deep fondness for you, either.

Pretending to love one's work, to be overjoyed by the ability to serve you coffee or pizza or dance for your tips, is an integral part of the job for service workers. “Service with a smile” is expected from anyone who deals with customers, and as Josh Eidelson and Timothy Noah pointed out last week at The Nation and The New Republic respectively, sometimes low-wage service employers require much more.

Eidelson reported on the recent move by Starbucks CEO Howard Schultz to push baristas to write “Come Together” on coffee cups in support of “bipartisan” deficit fear-mongering—to “draft its employees as a delivery system for austerity.” Schultz is a supporter of the “Fix the Debt” campaign started by ultra-rich ideologues that demands spending cuts (especially on social safety net programs) in supposed service of reducing the national debt.

Noah starts his report with a tale of a “slender platinum blonde” at Pret A Manger who he let himself believe was in love with him. “How else to explain her visible glow whenever I strolled into the shop for a sandwich or a latte?” But in reading a London Review of Books piece by British journalist Paul Myerscough, Noah realized that the Pret was actually pushing its employees to go above and beyond, to live up to a list of “Behaviors” that include having “presence” and touching one's coworkers publicly.

Ned Resnikoff at MSNBC also commented on the rise of emotional labor, citing Noah and Eidelson's pieces. He wrote:

It may be slightly uncomfortable to be served coffee by someone who clearly hates working long hours for a minimum wage, but it’s unclear that the best way to deal with that discomfort is through escalating worker coercion—especially when employee rudeness or visible unhappiness helps to make their low wages and poor working conditions visible.

What Noah, Eidelson and Resnikoff mostly overlook is that this is deeply gendered labor, and its requirements are based on behavior that is expected of women beyond the workplace.

Feminist sociologist Arlie Russell Hochschild is credited in all three pieces with coining the term “emotional labor.” Hochschild has spent decades writing of the role such labor plays in the lives of workers, especially women workers. She co-edited with Barbara Ehrenreich the book Global Woman, which looked at the role of women, many of them migrant women, in the “new economy,” exploring the ways in which women's supposed skill at emotional labor leads to their exploitation as low-paid care and service workers.

Much of this work has been women's work for decades, in some cases for hundreds of years. Noah comments that the increasing levels of emotional or affective labor involved in the American workplace is harder for men, but let's not forget that even in service workplaces, men make more than women. Women are 60 percent of the fast-food workforce and 73 percent of the tipped workforce—but women in restaurant work make 83 cents to a man's dollar.

Wal-Mart is perhaps one of the most famous workplaces to exploit women's “talent” for service work; Bethany Moreton, in her book To Serve God and Wal-Mart, explained how the company hired Southern white housewives, catering to their Christian values and offering them low wages in return for work they were considered naturally good at. The caring professions—such as teaching, nursing, and domestic work—were considered to be women's work as well, and correspondingly paid less than their more prestigious cousins. A domestic worker who cooks for the family might well make less than minimum wage while a famous chef commands much more; elementary school teachers start at $30,000 or $40,000 a year while college professors (if they can get a position) are much better compensated, and I don't really need to tell you how much more doctors make than nurses, right?

Andrew O'Connell at the Harvard Business Review, cited in Resnikoff's piece, looked at the actual pay rates for emotional labor in 2010:

I spent years as a waitress—in high school, then college, then as a struggling freelance writer—in that time I received pats on the ass, scribbled phone numbers in lieu of tips, and many, many personal questions I'd have preferred not to answer. Requiring feigned intimacy on the part of the worker allows the customer to ignore normal boundaries and pretend that a smile is an invitation to cross. Like the Pret workers, one of my bosses hired secret shoppers to make sure that servers went the extra mile; we were downgraded for not thanking our customers by the names we mispronounced off their credit cards. Not only our tips—which were our livelihoods, seeing as we only made $2.13 an hour, the legal minimum for tipped restaurant workers that hasn't changed in 22 years—but our jobs were at stake if we didn't smile hard enough.

Chelsea Welch, an Applebee's server, was recently and somewhat famously fired for posting a photo of a receipt on which a customer had written “I give God 10%, why do you get 18?” in lieu of a tip. (The restaurant placed an automatic 18 percent gratuity on large parties, a common practice so that the server doesn't get stiffed and the restaurant doesn't have to make up the difference in actual wages). She wrote a piece for The Guardian about her experience, commenting, “I’ve been waiting tables to save up some money so I could finally go to college, so I could get an education that would qualify me for a job that doesn’t force me to sell my personality for pocket change.” It seems that what she was fired for was daring to publicly express dissatisfaction with her job; even outside the workplace, emotional labor doesn't stop. (Just ask any woman if she's ever been told to “smile” by a strange man on the street.)

Women's personalities aren't all they're expected to sell in the service workplace. As Grace Bello wrote at Jezebel, there are plenty of jobs that aren't sex work but still rely on the emotional labor and physical appearance of women workers. At one of my serving jobs, I was told that I was hired because I wore seamed stockings to my job interview—I was encouraged to flirt and to “dress sexy.” Nikki Lewis, the lead organizer for the Restaurant Opportunities Center in Washington, D.C., talked about her first restaurant job while speaking to a crowd at the Ford Foundation on Monday for the launch of ROC founder Saru Jayaraman's book Behind the Kitchen Door. At age 17, she found herself on the top of a list kept by male coworkers rating the women's breasts and behinds. “That set the stage for every other restaurant I worked at,” she noted.

So-called “pretty girl jobs” are often seen as exploiting women's bodies, but in fact it's the emotional labor, the stress of feeling obligated to smile through humiliating comments, that marks this work. Would Noah have found this Pret A Manger employee's smile so compelling if she were not slender and blonde—if she were not attractive? Yet would he have thought she was interested in him if “radiance” wasn't required of her?

Sex workers have long known the value of feigned affection; as Noah rather crudely wrote, they've been faking orgasms for millennia. Yet as Melissa Gira Grant wrote recently, the happiness or unhappiness of sex workers is touted as a reason the profession should be abolished, while the happiness of other workers is considered beside the point.  As I used to snark when waitressing in New Orleans, a town full of strip clubs and the women who work in them, no one ever wanted to save me from the restaurant industry.

Yet the happiness of all those workers—whether they are escorts or baristas, nannies or waitresses—is, like the happiness of sex workers, something that is regularly faked. In fact, as Selma James, Angela Davis, and other feminists who wrote critically about household labor pointed out, women have been fighting for decades to make the point that they don't do their work for the love of it; they do it because women are expected to do it. And that expectation is precisely what made service work the “economy's bottommost rung,” as Noah wrote. But James and her comrades in the Wages for Housework movement fought for women's right to a decent wage for all their labor—as well as the right to refuse to do that work at all.

As Barbara Young, a national organizer at the National Domestic Workers Alliance, noted recently, service and care workers are ultimately exchanging labor for a wage, not doing it for the love of the work. It's time to stop pretending that enjoyment of the job is its own reward; I couldn't eat smiles or customers' phone numbers, and neither can the barista at your local Starbucks.