AFL-CIO Takes Up Immigration and Austerity, Even If It Means Fighting Some Dems 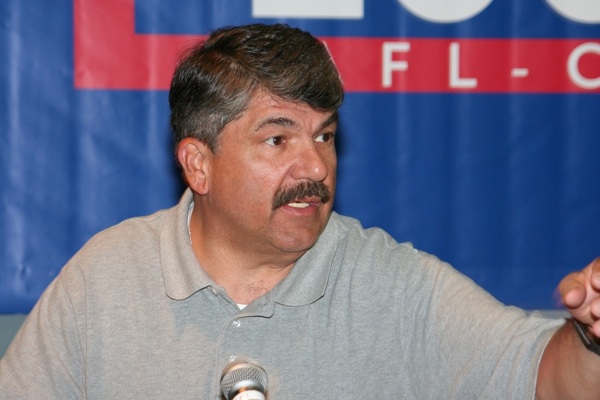 Within a week of November’s hard-fought elections, the AFL-CIO and many of its member unions had already started a new campaign. It wasn’t linked to the 2016 presidential race, or any election. It was a campaign to make sure that the politicians whom labor unions had helped to elect, including the president, met the needs of the working people who voted for them.

“In the past our political mobilization was really built around GOTV [get out the vote] and the election cycle,” AFL-CIO political director Michael Podhorzer explained as the AFL-CIO executive council met this week in Orlando, “[AFL-CIO] President [Richard] Trumka’s initiative, which was new, was beginning to develop the capacity to mobilize year-round. So one of the things we’d never done before this cycle was all the people who were participating in GOTV, instead of going home and celebrating, stayed out for the next week and a half or two participating in events around the ‘fiscal cliff’ and making sure there were no benefit cuts and taxes were raised on the wealthy.”

The execution may be new, but the idea is not. Since 1995, AFL-CIO political directors have talked about turning their increasingly sophisticated and effective get-out-the-vote efforts into a full-time, year-round operation to hold politicians accountable. But it was hard to get many unions to support the idea, even as some, like the Steelworkers, developed their own in-house means. Even now, support for the accountability initiative among unions varies, and the effort disproportionately focuses on the swing states where labor concentrates electoral work. Trumka also appears to pick his fights with Democrats more judiciously than some union leaders.

However, Podhorzer notes, Trumka “has proven to be more vocal in stating the workers’ position and perspective on Democratic policies, rather than swallowing hard and accepting them.” Indeed, Trumka has spoken out against Obama’s support of free trade agreements and austerity.

The accountability campaign that began after the election with the “fiscal cliffhanger” has morphed into the fight against the March 1 “sequester,” which levied mandatory budget cuts across the board. Unions rallied members to deliver the same message: Working people had been taking cuts in their standard of living for over a decade and could not take any more. Since 2011, Congress had sliced the federal budget by roughly $1.9 trillion, but raised taxes over the same time by only $600 billion. Balance would dictate increasing taxes before cutting any funding to programs for low- or middle-income families.

AFL-CIO policy director Damon Silvers says that Republicans have pushed—and some Democrats accepted—an “upside-down debate.”  The top priority now should be accelerating growth and job creation, he says. Such policies will not harm the economy or American workers, Silvers said, unlike the austerity policies favored by Republicans and some Democrats, which would impose major short- and long-term damage.

Silvers cited a recent Economic Policy Institute analysis showing that both growth and austerity will lead to the same shrinkage of budget deficits over the long run. Economic growth yields more revenue and cuts costs, for example, created by unemployment, thus cutting deficits, he said. And over the long-term, government policy changes can also contain healthcare costs, which are now rising much below the rate in both recent history and expectations. In particular, Silvers recommended including a Medicare-like public option in the state insurance marketplaces of Obamacare.

As a first step, the AFL-CIO called on Congress simply to repeal the misguided sequester, which they say was imposed to create a crisis. Congress failed to reach a deal last week to avert the sequester, triggering $85 billion in across-the-board government cuts.

Besides budgets, the AFL-CIO executive council has launched two other major accountability campaigns: on comprehensive immigration reform and voting rights.

Bringing in the undocumented

With immigration reform expected to come to Congressional vote, much attention has focused on Washington, where Republicans regularly propose what Los Angeles County Federation of Labor executive secretary-treasurer Maria Elena Durazo called “wacky ideas” to derail or weaken any new law—such as requiring perfect border enforcement, offering current undocumented immigrants some form of legal residency but not citizenship, or requiring proof of continuous employment (not easy for undocumented workers).

On the issue of what policymakers refer to as “the future flow” of workers, the AFL-CIO has worked out a compromise with the U.S. Chamber of Commerce that AFL-CIO immigration specialist Anna Avendano calls “historic and significant.” For the first time, the federation will support special temporary work visas when employers can demonstrate a need for immigrant workers, but such workers would have the option of changing employers and of applying to stay in the United States.

But the heart of AFL-CIO’s efforts on immigration are outside the Beltway. “We think actions taken outside Washington are the key to success in Washington,” says D. Taylor, the new president of UNITE HERE, the hospitality union with many immigrant members.

Rather than lobbying and negotiation,  the AFL-CIO is pinning its hopes on the mobilization of immigrant workers and the cultivation of unexpected allies--such as members of mostly white, non-immigrant unions like the teachers or building trades. AFL-CIO organizers are making the case to the broader membership that comprehensive immigration reform is not simply an issue of curbing exploitation of immigrant workers and their families, but something that will benefit all workers and surrounding communities. If immigrants have a voice and cannot be so easily abused, they can prevent unscrupulous employers from driving down standards in a way that takes a toll on all workers, including failing to abide by laws on wages, hours and other working conditions. “We’re all in this together,” emphasized American Federation of Teachers president Randi Weingarten.

To this end, the AFL-CIO is organizing rallies supporting comprehensive immigration reform in at least 14 cities and will help immigrant rights groups with anticipated big May Day marches.

Both Democratics and labor have a more-than-ideological stake in assuring citizenship—and thus voting rights—for immigrants. Undocumented immigrants are likely to vote Democratic if they become citizens. Having already proven their support for unions even when they are legally vulnerable, these undocumented workers—if freed from the fear of deportation if they speak out or organize—could also provide a surge of support for unions. Having once supported penalties on employers for hiring undocumented workers, the AFL-CIO long ago switched its outlook and now sees immigration reform—and the mobilization for it—as crucial for labor’s future.

“This is the time,” Durazo told reporters in Orlando. “This is the moment we’ve been waiting for. And we are putting enormous energy and resources into good immigration reform.”

The right to vote

Despite a checkered history on many issues of race, gender and immigration, both as a matter of social justice and practical politics, unions have long worked to expand voting and civil rights. Last fall, the AFL-CIO and its member unions put over 1,100 monitors in polling places in key swing states, many with a history of conservative efforts to suppress votes, especially blacks and other heavily Democratic constituencies. They fought new voter identification card requirements in the courts and in campaigns to educate voters.

But the specter of legislative attacks on voter rights continues to grow. Right-wingers on the Supreme Court reacted harshly this week to defenders of the Voting Rights Act, especially Section 5, which gives the federal government the power to review changes in voting laws in places, such as Alabama, that historically strongly curtailed black voting rights. These powers allowed the attorney general to block voter-ID laws in several states in 2012 that could have impeded almost a million people from voting, according to some estimates.

These new laws are “no different than a poll tax,” United Steelworkers President Leo Gerard said. The latest version are proposals, now under consideration in several states, that would divide up state electoral votes for president by Congressional district. Such a law, now being debated in Michigan, would have given Mitt Romney nine of the state’s 16 electoral votes last fall instead of the zero he received.  These “vote rigging schemes…are just wrong, and we’re not going to let people whose ideas are bankrupt steal elections,” Gerard said.

In addition to defending existing voting rights legislation and fighting new restrictions, labor is also mobilizing members to expand democratic rights so that instead of the approximately 70 percent of eligible voters usually registered, 90 percent or more of Americans would be registered for future elections. Unions, for example, will push for election-day registration or automatic, universal registration of everyone who is eligible.

Labor has not entirely put aside electoral campaigning. The AFL-CIO is looking ahead to 2014, especially at unseating the right-wing and anti-union Republican governors who took office in the 2010 mid-term “shellacking” of Obama and the Democrats. Podhorzer says unions will launch major crusades against Republican governors in Wisconsin, Michigan, Ohio, Florida, Pennsylvania, Nevada, Arizona, New Mexico and New Jersey. Depending on decisions by state labor federations, the AFL-CIO might also support primary challenges to some Democratic governors, such as Illinois Gov. Pat Quinn. Many of these governors, both Republican and Democratic, have angered unions by denying rights to public workers and by advancing so-called right-to-work laws (which allow workers to avoid paying their fair share of the cost for union work on their behalf, such as negotiating contracts or pursuing grievances).

“Our priority is going to be taking on these guys,” Podhorzer said. “I don’t know if the labor movement has ever made a sweep of governors like this as large a priority.”

Such voting campaigns complement labor’s fight against Senate filibuster rules and campaigns for workers’ rights to organize as part of a broad movement for democracy. This movement in turn can strengthen labor as a movement in its own right: beyond specific victories, such as labor law reform, a democratic movement will constrain the power of corporations generally. All of these efforts take on new importance for unions as attacks escalate against them.

“Every meeting I have attended this week we talked about a new sense of urgency,” said Lee Saunders, president of AFSCME (the public service workers union) and head of the AFL-CIO’s political committee, “because we’re at a turning point where we’ve got to get back to basics of organizing and mobilizing--not only our members but also our communities.”

AFSCME and United Steelworkers are sponsors of In These Times.