Haitian Sweatshops: Made in the U.S.A. 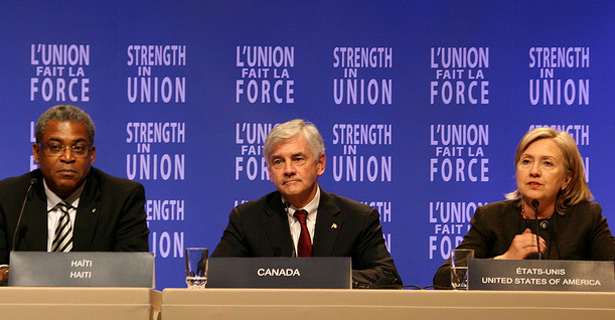 When the shift changes in the late afternoon, thousands of Haitians stream out from under an arched entrance labeled “Parc Industriel Metropolitain” toward the traffic-choked streets of Port-au-Prince. Among them is David, a thin 32-year-old man in a short-sleeve dress shirt and slacks, who works at one of the many garment assembly factories here, sewing pants for export to the United States. Through a Creole interpreter, David says the way he and his co-workers are treated is pa bon—not right.

Yet a lot of high-powered people with a stake in Haitian affairs think jobs like David’s represent the answer to Haiti’s problems. The U.S. State Department, the Inter-American Development Bank and the government of Haitian President Michel Martelly recently pulled together more than $300 million in post-earthquake subsidies to create another industrial park just like this one but in northeast Haiti, with Korean textile manufacturer Sae-A as its anchor tenant. Then-Secretary of State Hillary Clinton and former President Bill Clinton both spoke at the park’s opening ceremony, hailing it as the centerpiece of U.S. efforts to help Haiti recover from the devastating 2010 quake. Secretary Clinton echoed President Martelly’s mantra that Haiti “is open for business.”

As the Haitian plant of Sae-A began filling its first order—76,000 T-shirts for Walmart—the politicians smiled in satisfaction. More than a thousand Haitians had been put to work—a significant step for a nation where 80 percent of the ten million citizens lack jobs in the formal sector.

At least that was the theory behind the enormous amount of effort and money invested in bringing these jobs to Haiti. In 2008, the U.S. Congress passed the Hemispheric Opportunity through Partnership Encouragement Act of 2008 (HOPE II), providing customs exemptions that strongly incentivize corporations to import goods to the US. assembled by the Haitian textile and garment industry. This policy received a prominent imprimatur in 2009, when Paul Collier, an Oxford professor of economics and former director of the World Bank’s Development Research Group, prepared a report on Haiti at the request of UN Secretary-General Ban Ki-moon. The key to Haiti’s economic recovery, Collier concluded, is the Haitian garment industry and its potential to create hundreds of thousands of Haitian jobs.

Collier expressed no concerns over the likelihood that those jobs would pay sub-poverty salaries. In fact, Collier and others see the key to Haiti’s future in the large supply of desperate Haitians willing to work for rock-bottom wages. “Due to its poverty and relatively unregulated labour market, Haiti has labour costs that are fully competitive with China, which is the global benchmark,” he wrote in the report.

The U.S. has worked hard to keep them that way. Diplomatic cables obtained by Wikileaks show that the U.S. State Department assisted contractors for Fruit of the Loom, Hanes, and Levi’s in a successful campaign to block a planned minimum wage increase unanimously approved by the Haitian Parliament in 2009. That increase, driven by a series of worker strikes and demonstrations, would have compelled the contractors to pay 62 cents per hour (about $5 per day) to Haitians sewing clothing for sale overseas. But Haitian government leaders caved in to U.S. pressure and dropped the textile industry minimum wage to about $3/day. The U.S. then provided more assistance to Haitian garment companies through duty exemptions in the Haiti Economic Lift Program (HELP) Act in 2010. Though this legislative largesse cut overhead for the companies, Haitian workers are still the lowest paid in the hemisphere.

David explains what that pay scale means in real terms. Gesturing in the direction of the workers leaving the industrial park, he says that most of them earn about 200 Haitian gourdes per day. The typical exchange rate is 40 Haitian gourdes for one U.S. dollar, so their salary equals about $5 each day. By the time they pay for transportation to work and a simple meal of plain spaghetti and juice during the workday, they head home with only 40 gourdes, about one U.S. dollar. And they have not yet paid for dinner or housing. Yet unemployment is so pervasive here that the companies count on a reliable supply of Haitians willing to do the work at these sub-poverty wages—just as Paul Collier predicted.

David’s cost of living analysis was backed up by other Haitians I talked with. In 2011, the AFL-CIO-supported Solidarity Center conducted a study estimating the living wage for apparel workers in Port-au-Prince. Factoring in the costs of necessities like food, housing, cooking fuel and child care, the Solidarity Center estimated a living wage for an adult with two dependents to be 1,152 gourdes (about $29) per day.

The current wave of global support for garment-export-based economic development in Haiti has a precedent, as does the resulting struggle by Haitian workers to make ends meet. Under the dictatorship of Jean-Claude Duvalier in the '70s, the U.S. Agency for International Development launched a campaign to transform Haiti into the “Taiwan of the Caribbean,” i.e. the supplier of the cheapest export-assembly labor in the Western Hemisphere.

Wages were held down by enormous unemployment and by little prospect of worker activism under a repressive regime. Duvalier, politically and financially indebted to the U.S. and the International Monetary Fund, agreed to a neoliberal economic regimen that eliminated nearly every obstacle to free trade. By 1984, Haiti had become the 9th-largest supplier of goods to the U.S., mostly assembled products such as baseballs, clothing and toys.

The assembly companies and their U.S. consumers benefited from the arrangement. But a host country does not get much value from an industry where raw materials are imported in and the assembled products are shipped out. The coveted “multiplier effect,” produced when goods are produced and purchased locally, is absent from this export-only model. Combined with sub-poverty wages that provided little purchasing power to workers, the result was that all of the bustling export-assembly activity did not move the economic needle for the Haitian people.

Haiti certainly needs economic development, but there are other models to pursue, including agricultural practices the Haitian people successfully followed for generations. Separate from the often-dysfunctional government, rural Haitians adhered to the lakou system of property management that divided former plantations into small plots and yielded crops that supported the extended families living there. Haiti met its own food needs and exported to other countries.

But heavy-handed U.S. policies destroyed that legacy. Beginning in the 1970s and 1980s, the IMF, with the U.S. as its largest shareholder and dominant voice, forced Haiti to dramatically reduce tariffs on imported staples. The Haitian tariff on rice, for example, was dropped from 50 percent to the current rate of 3 percent, compared to a regional average of 20 percent. Haitian farmers can no longer compete with food imports from the U.S. and other countries, where crops are highly subsidized by their governments. As a result, hundreds of thousands of Haitians have migrated from the countryside to Port-au-Prince, where they compete to provide cheap labor for garment-assembly companies under harsh conditions.

David says his workplace, at a company called Interamerican Woven, is brutally hot—a literal sweatshop—with little ventilation and limited potable water. An October 2012 report, produced by the International Labor Organization as part of the Hope II legislation, confirms that the company and several others failed to meet baseline requirements for workplace conditions, such as high temperatures and clean drinking water. The report includes similar findings for several other garment assembly companies.

Jackson works for one of those companies, Global Manufacturers and Contractors, assembling T-shirts with tags like Hanes and Champion. Jackson and his wife have two young children. To make ends meet, both parents work six days per week in garment factories. Jackson’s wife skips church on Sunday to report to an additional part-time job. Yet they still must borrow from family and friends to pay the rent and keep food on the table.

Like David, Jackson is an active member of a syndicat of workers advocating for better wages and conditions. Company management pushes against the union, they say, harassing its members whenever possible. Recent investigations by the International Labor Organization and Haiti Grassroots Watch confirmed widespread union-busting in the Haitian apparel industry. “The people fired for being part of the union make a list this long, “ Jackson says, holding his hands two feet apart. “They find a different reason to let them go, but they are tagged because they are part of the syndicat.”

The companies could easily pay their employees better, Jackson says. His position is backed up by economic analysis by the World Bank’s International Finance Corporation, which reviewed the competitiveness of the Haitian garment assembly industry in 2011. The report concluded that preferential market access to the U.S. provided by HOPE II and HELP, along with comparatively low sea freight costs, provide a distinct market advantage to these companies. “The argument that factories in Haiti can't raise wages is bogus, as they have some of the most competitive costs in the world already,” says Jake Johnston, a researcher on Haiti issues for the Center on Economic and Policy Research.

The T-shirts Jackson makes for GMC are shipped to Etazini—the U.S.—so I ask him if he has any message for Americans. He thinks for a moment, then replies in Creole. “Wi. I appeal to their conscience and hope they ask questions about what they are buying. We make T-shirts for cents, they buy them for dollars,” he says. “That is the reason we come together to support each other; to fight for fairness.”

Name of workers in this piece have been changed to protect them from retaliation.

Fran Quigley is a clinical professor at the at Indiana University Robert H. McKinney School of Law, teaching in the Health and Human Rights Clinic. He is the author of several academic journal articles on social justice and human rights, and a book, Walking Together, Walking Far: How a U.S. and African Medical School Partnership Is Winning the Fight Against the HIV/AIDS Pandemic (Indiana University Press, 2009). He has also served as the executive director of ACLU of Indiana and as a staff attorney with Indiana Legal Services.