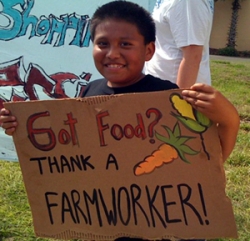 Last week, immigrants’ rights groups finally got the papers they’ve been waiting for, an 844-page whopper of a bill that attempts to “fix” the immigration system by promising a little bit to everyone: businesses get workers, workers get jobs and millions of undocumented people get an opportunity to gain citizenship.

One section of the bill sums up the political calculus underlying the legislation: In the plan to overhaul the guestworker system on U.S. farms—the seedbed of the oldest and roughest forms of migrant labor—we can see the strained balance between the interests of profit and the interests of people in determining who gets to become "American."

Under the current legislative proposal, undocumented farmworkers would receive a new kind of labor visa—called a “Blue Card”—which would enable them to work legally with certain minimum wage guarantees and federal entitlements, like workers’ compensation. These visas, capped at 112,000 annually (a fraction of the undocumented farmworker population of roughly 500,000 to 900,000) would also grant “portability” to workers—i.e., autonomy to switch employers so they’re not chained to a single workplace.

There are additional provisions to protect workers who report labor violations and to make it easier for them to qualify for immigration relief as victims of crime if they’ve been abused or exploited. International labor recruitment—the use of private "middle man" agencies to arrange work visas and job placements—would be more tightly regulated, closing some of the loopholes in the current system that allow recruiters to saddle migrants with exorbitant fees or tie them to abusive, unregulated employers. And the centerpiece of the plan is the “path to citizenship,” which would theoretically allow immigrant workers who are currently undocumented to “legalize.”

But the path to citizenship is fraught with some impossibly high hurdles: The process to gain permanent residency could take about 10 years (the bill provides a shorter timeframe for farmworkers, who are viewed as a special labor category because of their role in the food production system), and an even longer wait to officially naturalize. Activists fear that the various eligibility requirements, from background checks to heavy fees, may end up pricing hundreds of thousands of people out of a green card.

Daniel Sheehan, executive director of the Association of Farmworker Opportunity Programs (AFOP), tells In These Times via email that the legalization process might prove prohibitively costly for farmworkers in particular. "Because they are often paid poverty wages and suffer wage theft and other abuses, they may not be able to pay high fines required to secure citizenship," he says.

In other words, many migrant farmworkers would have a right to collect a paycheck but lack the right to basic medical care, even when their job gives them a repetitive stress injury or poisons them with pesticide sprays.

Advocates note that even for “legal” workers, the proposed bill fails to address major gaps in legal protections. The National Guestworker Alliance, for example, points out that although the bill offers a new program, the W-visa, to enable lower-skilled workers to work non-agricultural jobs with standard legal protections, employers might simply turn to a separate guestworker visa, the H2B, which involves less regulation and thus opens more opportunities for employers to place migrants in coercive or exploitative jobs.

Sheehan stresses the need to both ensure all guestworker visas are equally regulated and to ensure equal rights for U.S, and immigrant farmworkers, noting that "any diminished protections for agricultural guest workers could put U.S. farmworkers at even greater risk," by eroding labor protections and wage standards across the sector.

Advocacy groups have also raised concerns about a potential gender bias in the Blue Card program, as women have historically been shut out of formal agricultural work visas, even though they make up a significant minority of the farm labor force.

Nonetheless, groups like AFOP, Centro de los Derechos del Migrante, and Farmworker Justice cautiously support the emerging compromise legislation. It might at least help remedy the intense inequalities resulting from exclusion of farmworkers from the New Deal-Era Fair Labor Standards Act. An avenue toward legalization could help undo a racist and oppressive labor structure that has pauperized successive waves of southern sharecroppers, Filipino crop workers, and Mexican Braceros throughout the twentieth century.

But even if the reforms provide a legal framework for immigrants to assert their rights, the multifaceted inequities built into farm labor law require multifaceted responses, from the labor movement, policymakers, and workers and their communities.

Legal protection in and of itself does not equal power—particularly since employers will always find end-runs around labor regulations, health and safety standards, and even basic civil rights laws against discrimination and forced labor. And overall, the chaotic patchwork of guestworker programs intrinsically segregates and stratifies the workforce to the benefit of capital. Of course, workers benefit when they are given temporary reprieve from deportation or have some legal recourse against an abusive boss. But those piecemeal fixes don't necessarily help workers fight for a fair contract at work, or protect them against sexual harassment when working in a private home, or keep their kids from missing school to pick crops.

Immigration reform may bring desired legal status for many farm workers. But it will not solve their economic marginalization within a system that is built on inequality.

There must be freedom of association for farmers’ unions as well as farm workers’ unions, This would bring necessary participation and accountability to discussions throughout the agricultural supply chain.

Such modernized labor and business relations are essential if all parties are to understand each other, and to respond to market demands for food that is safe and whose supply is fairly obtained and secure.

For farm workers, a blue card would provide a single right: the right to work legally. Unless workers can couple that work authorization with collective power in their workplaces, it’s employers who will benefit the most. Empowerment requires forming alliances with community groups and unions, encouraging collective bargaining contracts, and educating consumers about farm labor struggles, as the Coalition of Immokalee Workers has done with its community-based “fair food” campaigns to improve wages and working conditions in Florida tomato fields.

You won’t find those rights in the mammoth reform bill. In fact, immigrant workers don’t need a new bill to grant them the human rights to which they’re already entitled, regardless of their nationality or employment status. They just need the political space and the organizational power to stand up for the principles of fair treatment and dignity at work.