Factory Collapse in Bangladesh Exposes Cracks in the System 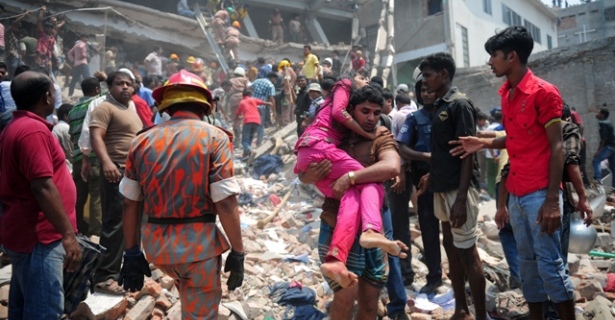 There are few ways to make a decent living in Bangladesh, but there are many ways to die trying. The cruel weight of that reality bore down on a Dhaka factory complex on Wednesday as it crashed to the ground and instantly extinguished hundreds of lives and livelihoods.

As of this writing, the body count at Rana Plaza is about 300 and rising, with hundreds more workers still unaccounted for, and the 72-hour emergency window for recovering trapped people alive almost gone.

Meanwhile, hundreds of thousands of enraged workers in the area have gone on strike and rallied to demand justice for the victims.

While families struggle to identify the dead, activists have begun to investigate the aftermath and uncovered a slew of multinational labels associated with Rana: They include U.S.-based The Children’s Place and Cato Fashions, France's Tex (Carrefour brand), Benetton, Spain's Mango, and Canada's Joe Fresh, Germany's NKD and others. Walmart says it had no “authorized” supplier at Rana but one of the factories listed Walmart as a client, reports the Associated Press, and other companies have scrambled to distance themselves from the facility.

Some workers had reportedly noticed a crack in the building’s edifice shortly before the incident, but their warnings went ignored. Some were told to report to work anyway or risk losing a month’s wages. With minimum pay set below $40 per month (about the retail price of a typical sweater they might produce), workers could ill afford to be concerned about their safety, and so they followed orders and reported to what would be for many their last day of work. Kalpona Atker of the Bangladesh Center for Worker Solidarity told Democracy Now! on Thursday:

On Tuesday, when workers saw the crack in the building, they denied to work, so they left the factory in the afternoon. But on the Wednesday morning, they were forced to go inside the factory, and someone with a hand mic said, "One crack doesn’t matter. The factory will be—there will be nothing happen." And they were forced to keep working. And after this announcement, within 30 minutes the building collapsed.

Family members scoured for any sign of loved ones amid the rubble, while rescue workers used a strip of fabric as a makeshift “slide” for bodies. The scene of carnage captured the peculiarly dehumanizing nature of the global manufacturing system: Workers and their communities are reduced to anonymous bodies while profit continues to flow smoothly to Benetton, The Children’s Place and Joe Fresh. Catastrophes like the building collapse or factory fires or the everyday, low-grade disasters of poverty and attacks on union leaders—all that suffering is welded to the profit structure, occasionally papered over with token “corporate social responsibility” and “ethical sourcing” programs.

The incident at Rana (a property reportedly owned by an influential local politician) was in a way, sadly predictable, coming five months after a horrible factory blaze that killed at least 112 workers who had supplied clothes for Walmart, Sears and other big brands. Yet, while the factory and building owners at Rana face charges of negligence, the Western companies that reap the profits face a mere public-relations embarrassment.

Now the death toll in the collapse of the Rana Plaza garment factories has surpassed Tazreen. My hope is that all the media attention and expressions of concern and outrage by consumers will translate into factory owners, brands and government taking meaningful action to put an end to the killing of Bangladesh’s garment workers.

ILRF, the Worker Rights Consortium and other advocacy groups have campaigned for the Bangladesh Fire and Building Safety Agreement, which would place participating brands in a legally binding program to address workplace hazards—more rigorous than current voluntary safety programs—and subject all contractors in the production chain to tighter independent oversight. So far, just two multinational brands, PVH and Tchibo, have signed on.

Perhaps the most tragic aspect of the building collapse is that the factory workers could have been heroes had they had the power to act on the warning signs they had spotted earlier on. If they had the support of a union, they might have collectively refused to report to work until the hazard was addressed. But since Bangladesh’s garment sector has virulently blockaded and squelched union organizing, Human Rights Watch explains, their vigilance could not protect against, but merely portend, their sealed fate:

According to labor organizers in Dhaka, none of the factories located in the Rana Plaza building were unionized. Weak enforcement of labor laws in Bangladesh contributes to impunity for employers to harass and intimidate both workers and local trade unionists seeking to exercise their right to organize and collectively bargain.

The anti-union environment girds the brutal manufacturing structure that imposes a feverish pace of production on workers, many of them impoverished young women. The production chain is further lubricated by the geographic distance of the companies placing the order, which gives U.S.- and Europe-based brands “plausible deniability” when these man-made accidents erupt in the global South.

While companies feign ignorance and puzzlement over “what went wrong” at Rana, they’ve already proven that they’re well aware of the root problem. They shipped their manufacturing overseas specifically to avoid protective regulations and thus keep overhead and labor costs unfathomably cheap. Conversely, corporations could reverse this vicious trade-off between rights and profits by investing heavily to improve working conditions and strengthen safety enforcement, as well as monitoring under a program like the Bangladesh safety agreement. But that would mean expending the very same resources that they’d worked so hard to hoard by contracting with the cheapest and most dangerous workplaces in the world.

So the market logic will continue as long as the cheap clothes keep flying off the rack. Whether or not the Rana incident ultimately shames multinationals to get serious about workplace safety, garment workers in Bangladesh are already wondering whether their factory will be the next disaster site. In an interview with Al Jazeera, one young worker said, "We are feeling shock and pain. We want to protect our colleagues, our brothers and sisters. Buildings should be made safer than they have been in the past, but this is not being done."

So far, the people who are most actively responding to the Rana disaster are, as usual, the workers who rallied in the streets to express outrage at the garment industry.

The cracks in the manufacturing system are showing. As workers grimly await the next tragedy, the world will ignore their warnings at its peril.