A More Democratic Foxconn? No One Told the Workers 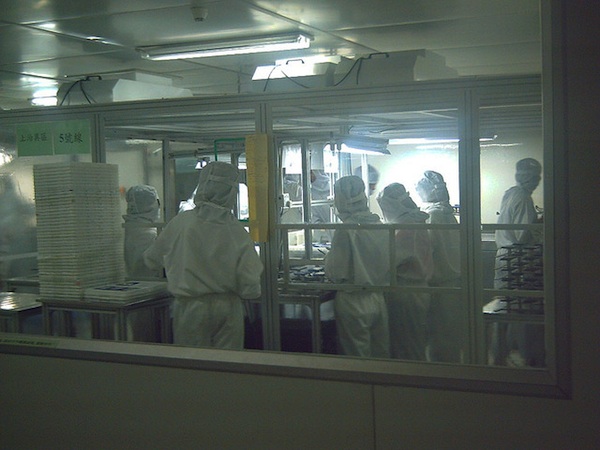 With a workforce of more than one million, the electronics giant Foxconn has enough workers in its Chinese factories to fill a small country. So it's fitting that the company has vowed to make its manufacturing kingdom a bit more democratic by encouraging union elections.

But although the company announced its push for union democracy in February, a subsequent study by academics in Hong Kong and mainland China reveals that many workers don’t even know whether they’re in a union, and many others don’t have a clear idea of what their union does or how it works. And that actually makes perfect sense, since China’s unions are ill-defined, bureaucratized institutions—politically ineffective by design.

The union plan is part of a host of promised reforms that followed public scrutiny of Foxconn's premiere client, Apple. The Apple brand has come under fire from advocacy groups and the media for profiting from the exploitation of young Foxconn workers—underscored by a series of employee suicides stretching from 2010 to just a few weeks ago.

As Working In These Times noted when the plan was announced in February, the idea of “democratizing” unions at Foxconn should be viewed skeptically since official unions are linked to the state-controlled All China Federation of Trade Unions (ACFTU), which tends to collude with employers in ignoring or suppressing autonomous labor action.

While labor movements in many regions, including the U.S. and Europe, face a tension between militant labor activism and “cooperative” union structures based on “partnership” with management, in a non-democratic nation like China, where unions are aligned with the government, activism and the official unions are fundamentally at odds. As many activists and reporters have pointed out, the most critical strikes and protests in recent years have been illegal and unsanctioned—many of them spontaneous wildcat strikes that sprung up out of frustration with management. Such unrest is precisely what the ACFTU is designed to pre-empt and contain, not foster.

One of the most pivotal strikes in recent years, the 2010 uprising by Honda plant workers in Guangdong, demonstrated both the impotence of the ACFTU and the collective strength of workers. Workers mobilized on their own and won wage concessions--but more importantly, made international headlines with their protests, acting independently of the management-friendly official union. The Hong Kong-based China Labour Bulletin commented: "The Nanhai Honda strike represented an all-time low for the All-China Federation of Trade Unions, an organization that had long been ridiculed for being out of touch with the workers and in league with management.” Since then, the ACFTU has embarked on some reforms to encourage direct union elections and collective bargaining, though the changes have been incremental.

Today, the state of the Foxconn union reveals the stunted pace of reform in large Chinese enterprises. The new study—based on about 685 surveys from three Foxconn factories in industrial parks in Shenzhen and Wuhan—reveals that in contrast to Foxconn’s rapid-fire, cutting-edge manufacturing techniques, which has come to symbolize China’s capitalist explosion, the labor dynamic on the shop floor remains stubbornly retrograde.

According to an excerpt of the study translated and published by the Hong Kong-based watchdog Students and Scholars Against Corporate Misbehaviour (SACOM), and publicized on the GoodElectronics network, substantial majorities of respondents did not know their union branch's representatives. More than 9 in 10 workers reported that they “know nothing about the elections” and about the same proportion “had never participated in the union voting in any forms.”

The researchers concluded, “From this, we know that the union committee never really represent the workers, the workers cannot clearly express their issues to the unions.”

Moreover, the surveys reveal a low level of basic engagement with the union: “Only 24.6 percent of the workers think they are union members and only 16.9 percent of Foxconn workers have union membership cards.” Many seemed to lack a basic understanding of Chinese labor law. (This doesn’t necessarily indicate apathy, just an understandable lack of interest in official structures that have played little role in their daily work lives and have been notably distant from the recent high-profile autonomous labor actions.)

There was a widespread perception among surveyed workers that the union has been unresponsive to workers’ economic strains. Though wages have increased overall, researchers pointed out that those gains have been offset by high inflation and other compensation cuts:

Only 17% of them agree the union has helped on the increase of earning; and 24.3% think the union protects their rights while layoffs take place. The words used mostly by workers to describe existing union are “not understand”, “not familiar with”, “hypocritic” etc.

In an email to Working In These Times, China Labour Bulletin Communications Director Geoff Crothall says that since lower-level workers are essentially disempowered by the union structure, many probably opt to just leave a job they are unhappy with, rather  than bother with union participation:

The main obstacle to union democratization is that Foxconn itself has no interest in even talking to the union let alone negotiating pay and conditions with it as an equal partner. Foxconn has always unilaterally dictated pay and conditions and there is no evidence that is about to change. Why would workers want to get involved if the union has no power to actually improve things.

In addition,many production line workers see Foxconn simply as short-term opportunity to make some money before moving on to a better job elsewhere and see little benefit in getting involved in the union.

Nonetheless, workers did voice hopes that Foxconn can develop unions that might one day be a vehicle for real workplace democracy. Respondents expressed strong support for having union committees elected by workers and using unions to represent employees pushing for wage increases.

Foxconn’s union reform effort has done little to change the day-to-day lives of workers on the assembly line. But the global public scrutiny of its labor practices has opened political space for challenging obstacles to genuine labor organizing.  Workers show no sign of being placated by Apple and Foxconn's public-relations efforts, and can still seize the moment to advance an autonomous movement for union rights.