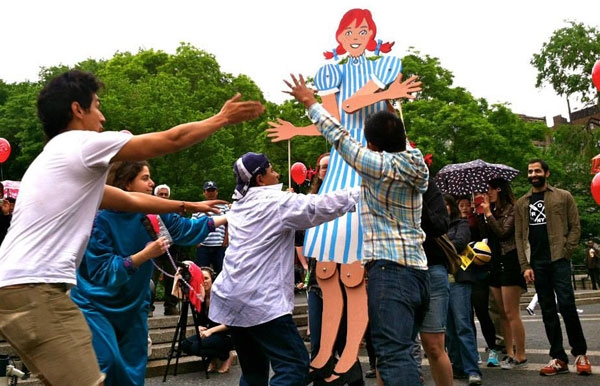 An oversized puppet of the Wendy's mascot, provided by the People's Puppets of Occupy Wall Street, took part in silent street theater to convince the fast food giant to sign onto the Fast Food campaign. (Coalition of Immokalee Workers)

While rain pattered gently on the concrete steps of Manhattan’s Union Square last Saturday, a group of workers were giving the assembled crowd a tour of the sun-scorched fields of Florida’s tomato farms. The performers had turned the urban square into a stage for a street theater performance, depicting backbreaking labor and tussles with industry goons emblazoned with corporate food brand logos.

By dramatizing a farm scene amid the bustle of Greenwich Village, Chelsea and the surrounding neighborhoods, the activists of the Coalition of Immokalee Workers highlighted the connection between farmworkers’ daily struggles and the villain of the drama: Wendy’s restaurants, which are the primary target of the group’s Fair Food campaign for decent labor standards in an industry built on modern-day serfdom.

The Union Square rally–featuring a brass band adorned with Wendy’s trademark red pigtails and tomato-shaped placards proclaiming “Justice" and "Derechos" for farmworkers–was part of a nationwide series of Fair Food demonstrations that are helping bridge the conceptual gap between food consumerism and farm labor, a sector replete with poverty wages and brutally exploitative conditions in the fields. The Coalition has been campaigning for months to push Wendy’s and the Florida supermarket giant Publix to sign a Fair Food agreement like the agreements brands like Chipotle and Trader Joe’s have already signed.

The Fair Food Program mandates about an additional penny in wages for each pound of tomatoes picked by Florida workers. That seemingly trivial amount, when multiplied by the massive scale of tomato agriculture, adds up to a meaningful difference in the lives of thousands of farmworkers who typically lack a living wage and basic labor protections: Since January 2011, the penny-per-pound premium has put some $10 million in their pockets, which could mean a raise of more than 60 percent for some low-wage laborers.

CIW activist Oscar Otzoy told Working In These Times in Spanish that, by spreading the word through rallies across the country, “We take action directly against the corporations that are responsible for the conditions that we're facing. Because in the market context that exists, it's these big companies that profit the most from the work that we as farmworkers are doing. And as they continue profiting, we continue facing the conditions that have existed for so long.”

Otzoy, who has been working in the United States for seven years, noted that although immigrant workers are at the center of their campaign, the exploitative conditions have affected all farmworkers–those with and without papers and even U.S. citizens, because the production structure is inherently exploitative. “Our goal with this program is to get to a day when everyone, regardless of their status, is treated with dignity and respect on the job,” he said.

To prevent abuses like wage theft and forced labor, the Fair Food Program sets a broad code of conduct that ensures compliance with labor laws, “including zero tolerance for forced labor and systemic child labor,” a binding commitment to an auditing process for growers, and a system for workers to file complaints against employers. The program also deploys health and safety monitors to help protect workers from the many hazards lurking in hot, pesticide-laden fields.

The agreement is anchored by the 2010 commitment by Florida’s major growers’ association, Florida Tomato Growers Exchange, representing about 90 percent of the state’s producers. Since then, the Coalition’s program has attracted massive support from consumers, community groups and upscale foodies, and pressured numerous industry purchasers to sign on. The Coalition's unique, worker-led organizing model fuses consumer education and outreach with grassroots labor mobilization, and in the process reveals interlinked systems of consumption and production. In effect, their movement envisions "food justice" as structural change within a massively consolidated industry.

Wendy’s is seen as the “last holdout” among major fast food chains. However, advocates note that, ironically, CEO Emil Brolick was something of a fast-food pioneer in 2005, when the company he led then, Taco Bell, became the first corporate buyer to sign the Fair Food Agreement.

The campaign is well versed in challenging corporate resistance. Negotiations with Trader Joe’s dragged on for months as the company criticized the program’s provisions as “overreaching.” The fashionable food bazaar finally capitulated following a similar New York protest campaign in 2012. As Josh Eidelson reported last year, the sticking point in the Trader Joe’s campaign was perhaps not so much the extra penny–the company insisted it was already paying a price premium–but the idea of contractual obligation to fair labor standards.

Similarly, in its ongoing stand-off with the Dutch supermarket corporation Ahold, the CIW has clashed with the CEOs not over the pricing arrangement, but over their demand for a binding agreement, as opposed to the usual voluntary “corporate social responsibility” code of conduct. Ultimately, the Fair Food Program isn’t just about boosting wages but empowering workers as industry stakeholders.

But the next frontier for the fair food movement may be far more ambitious. While groups like CIW have waged successful grassroots campaigns for farm labor, fast food restaurant workers have also been raising their collective voice through an unprecedented wave of strikes in various cities. Meanwhile, advocacy groups like Just Harvest and Food Chain Workers Alliance, which push for food policy reforms for greater labor protections and social sustainability, have been building cross-sector labor alliances to link workers in the fields, processing factories and fast food kitchens. The atmosphere is ripe for a cross-cutting consumer-labor movement to ensure fairness for all the hands that feed America.