A Budget That Tightens Belts by Emptying Stomachs 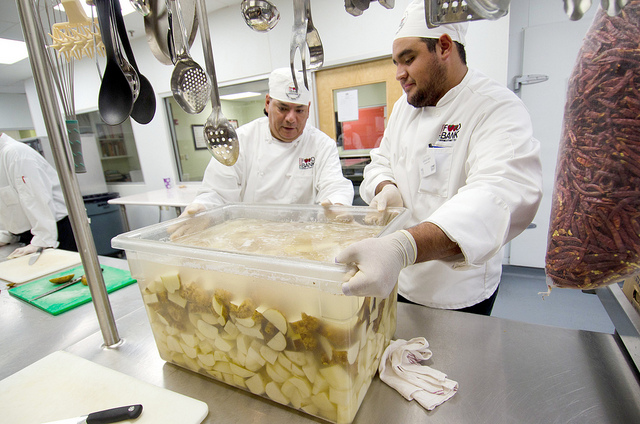 A time-honored tactic of conservative lawmakers is to “starve the beast”by defunding government programs. In the case of food stamps—the quintessential whipping boy for budget hawks—they’re going a step further by trying to starve actual people.

The House of Representatives and Senate have proposed the United States “tighten our belts” by slashing billions of dollars from poor people’s food budgets. The main mechanism for shrinking the Supplemental Nutrition Assistance Program (SNAP) funding is the removal of “categorical eligibility.” Basically, most states have used this policy to streamline enrollment: Families are made eligible for food stamps based on their receipt of other benefits, such as housing or childcare subsidies. That often means broadening eligibility for working-poor families or those with overall household income or savings that exceeds regular, stricter thresholds for qualifying for food stamps.

Now the House and Senate farm bill proposals, particularly the House plan, seek to “save” billions more by cutting categorical eligibility. Under the House farm bill budget, which cuts $20.5 billion in SNAP over 10 years, benefits would be eliminated for “nearly 2 million low-income people, mostly working families with children and senior citizens,” according to the Center on Budget and Policy Priorities (CBPP). (The Senate bill also cuts SNAP but only by about $4 billion over 10 years). In addition, the cuts would devastate poor students, because SNAP eligibility has enabled 210,000 low-income children to qualify for free school meals. That means more hunger pangs for kids in the cafeteria, and an emptier refrigerator waiting for them at home. Meanwhile, their working-poor parents may find themselves buying cheaper, less nutritious food to stretch budgets, or turning to the local food pantry, or facing cruel trade-offs like delaying rent payments to pay for groceries or leaving a health problem untreated.

According to Stacy Dean, vice president for food assistance policy with the CBPP, the House proposal would end up cutting food stamps for people who hold minimal assets--poor families who have held onto a car to get to work, for example, or with savings just above $2,000. So at a time when wealth has declined for 93 percent of households, poor families who have built up a modest nest egg may be rewarded with the indignity of hunger. The typical food stamp family doesn’t fit the stereotype of the shiftless poor or “welfare queens,” Dean explained via email:

A typical working family that qualifies for SNAP benefits due to categorical eligibility is a mother with two young children who has monthly earnings just above the program’s monthly gross income limit ($2,069 for a family of three in 2013). On average, the families above that limit who qualify for SNAP as a result of categorical eligibility have combined child care and rent costs that exceed half of their wages. The approximately $100 per month in SNAP benefits they receive covers about one-fourth to one-fifth of their monthly food budget.

In addition to bumping people out of categorical eligibility, the House proposal would hit the so called “heat and eat” policy — a mechanism used by some states to coordinate heating assistance payments with food stamps. As a result, according to the CBPP, “about 850,000 low-income households, which include about 1.7 million individuals, would lose an average of $90 a month in SNAP benefits.”

All these cuts are absurdly out of sync with economic realities of the working poor. (They’re also heaped on top of a current cut to food stamps due to the expiration of a temporary boost from the federal stimulus package.) Food Research and Action Center (FRAC) estimatesthat over one-sixth of the population faces hardship in securing an adequate food supply--with appalling rates of food insecurity among black and Latino households. And among those who can afford to keep their pantries stocked, many are still too poor to afford healthy, fresh food. Food stamps just dent that gap in food security, with monthly payments averaging a luxurious $280 per household.

For all the eagerness in Congress to shrink food stamps, the program’s problem is not that it helps too many, but that it reaches too few, as Monica Potts has reported. About one in four people who qualify for some reason do not receive benefits, according to federal estimates, perhaps due to stigma or bureaucratic barriers in the application process. Many immigrant families are also excluded due to their legal status.

Far from supplementing welfare “dependency,” SNAP actually supports work. According to the CBPP, “Among SNAP households with at least one working-age, non-disabled adult, more than half work while receiving SNAP—and more than 80 percent work in the year prior to or the year after receiving SNAP.” FRAC reports that overall, “SNAP typically boosts low-wage workers’ income by 10 percent or more,” which in turn helps stimulate the economy overall.

Between 2000 and 2011,the number of income-earning households on food stamps has more than tripled, topping six million. On the one hand this is a disturbing sign that working-class families are unable to find living wage jobs. But this reality highlights the critical role of SNAP in protecting people from sinking further into poverty.

So that’s the theme of this year’s budget debate: that millions of people can’t afford to eat is not a cause for alarm for politicians so much as a burdensome line item. And erasing public benefits make it easier to make the poor invisible in the public mind. After all, food stamps symbolize not only the failure of “free markets” but the power of social policy to reduce endemic human suffering. For millions of Americans, that monthly food allowance is an unsavory reminder of the consequences of social disinvestment: no matter how hard you work, at the end of the day, you’ll still be hungry.