Despite Bringing the Surveillance State to Work, Bloomberg has Trouble Tracking Overtime 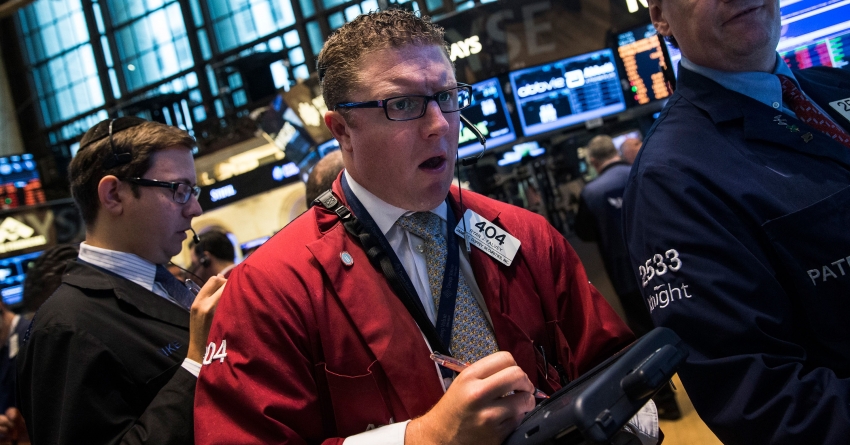 Bloomberg customer service workers often have to put in intensive 'emotional labor' when dealing with traders on the floor of the New York Stock Exchange.   (Andrew Burton / Getty)

All of their calls were recorded and listened to. As soon as they logged into the computer system, their very keystrokes were tracked, their messages read and timed. If they missed a call, it was noted. Sometimes while on a call, they'd be interrupted by their boss, asking them to put a call on hold so they could come get instructions from a “team leader.”

Yet according to a recent lawsuit, even with all that surveillance Bloomberg LP couldn't make sure that its technical support workers got a lunch break, or clocked out on time at the end of their shifts. The class action suit filed on behalf of those employees alleges that the company wrongly classified those workers as exempt from overtime pay even as they regularly worked much more than 40 hours each week.

“People make Bloomberg,” was one of the slogans Peter Enea recalls being displayed on the walls at Bloomberg LP, where he worked in technical support from 1999 to 2010. The company aimed for a “Times Square feeling,” Enea says, with lots of hustle and bustle, TV screens even in the bathrooms, scrolling news feeds everywhere. Their business was providing financial information to the overlords of the financial system itself—more than 315,000 Bloomberg terminals, which cost more than $20,000 apiece, transmit communication, trades, news, and data to traders and bankers around the world. Enea and his colleagues provided technical support to major clients—bankers at Goldman Sachs and JP Morgan were regularly on the other end of his phone. According to the New York Times, Bloomberg LP had revenue of nearly $8 billion in 2012, with roughly 85 percent of that money coming from the terminals—padding New York City Mayor and company founder Michael Bloomberg's $27 billion fortune.

Those same bankers were the ones who complained recently that Bloomberg News reporters were using data from Bloomberg terminals to break news. That information, supposedly kept confidential, allowed some of Bloomberg News's 2,400 reporters to ferret out information on hires and departures at big firms when users hadn't logged into their terminal in a while. Banking regulators at the Federal Reserve, who use the terminals, may also have been subject to surveillance, according to the Times' report.

“Everything you did was monitored,” Enea says of his time as a Bloomberg employee. “They would say that they would not listen to personal calls—if they would hear your doctor calling, they would drop off the call—but I always had that feeling that they were spying on me.”

From the time he'd arrive at the office, he explains, multiple systems would track his movements. He'd swipe his badge at the door, then log into a phone system and instant messaging system, and receive tickets from an automated system that sent work orders out. He'd have to keep up with all of these systems at once, and make callbacks to clients simultaneously. Each month, he'd get a breakdown of his work: how long he spent on the phone on average, how many instant messages he took, how many calls he missed. Sometimes he'd be in the middle of a call or a message session and get a tap on the shoulder from his boss. “Pete, log off,” they'd tell him, and bring him to a one-on-one meeting that served as a sort of micro performance review.

“You'd be surprised, try to think of what you'd done,” he says. “You would just feel like a little kid.”

According to Enea, he was expected to log in to the systems at least 10 or 15 minutes before the time his shift was scheduled to start. “If I had a lot of work backed up I would come in a half hour earlier, knowing I'd have to catch up and make these callbacks to clients from the previous day,” he says. He estimates that he worked around 10 hours a week of unpaid overtime. On busy days, the workers weren't allowed to get up from their desks at mealtime—the company would order in food instead. “You'd work through your lunch and all you got was a slice of pizza.”

Artemio Guerra, an attorney with Getman Sweeney, the firm that brought the lawsuit on behalf of Enea and his colleagues, tells In These Times it's noteworthy how much money companies like Bloomberg spend on metrics and statistics meant to gauge performance and productivity. They create a hypercompetitive environment, evaluating workers against one another, making it hard to keep up—especially so for Enea, who has multiple sclerosis.

“It's like a gladiator fight," Guerra says. "The younger new hires are probably going to be single, without families, able to perform differently than someone who's been there 10 years.”

“These are supposed to be good jobs,” he adds, with salaries at some $50,000 a year, “but in the modern workplace, the worker doesn't even have the ability to leave the workplace until the employer says.”

Bloomberg called Enea and his co-plaintiffs “disgruntled individuals” last June when the suit was filed, implying that their conditions aren't representative of most of the company's employees. But the suit was filed as a class action, meaning that any win for the lead plaintiffs will also impact the entire class, which, if the court agrees, will consist of current and former employees going back six years from the date the suit was filed. According to Guerra, anyone who has worked in this particular position from July 2006 until the case is settled or tried would be a member of the class unless they affirmatively opt out.

The suit also asks for a date when the company will change its practices and start paying these employees for overtime work.

According to Guerra, the U.S. Department of Labor has found overtime violations at GCUS, another section of Bloomberg's technical support workforce. GCUS is the first step of customer service that handles basic complaints or refers clients to GTEC, the more complex support department where Enea worked. (Getman Sweeney also represents workers in this department, as well as PC Help Desk, Bloomberg's internal customer service system.)

For years, Enea and his colleagues didn't realize that they should have been being paid overtime—they complained to one another, but assumed that because they were salaried employees, that overtime regulations didn't apply to them.

“Time and time again we see help desk call center workers being classified as exempt from overtime and being required to work because of the nature of the work,” Guerra says. Even salaried workers, though, are subject to wage-and-hour laws. An administrative exemption wouldn't apply to these hypercontrolled employees, who are barely allowed to decide to get lunch, let alone to make administrative decisions about the company. And an exemption that would apply to developers or engineers also doesn't cover people who do customer service over the phone.

Bloomberg's website touts its customer service workers as “experts” who are “highly trained professionals with exceptional customer service who will understand your needs.” But Guerra notes that being “skilled” workers doesn't mean they have any real flexibility or control over their own work.

“The workplace demands so much of them that work bleeds into their lives," Guerra says. "Workplaces don't adapt or expand employment, they just demand more and more of this group of employees.”

“We would have certification exams every month. You had to get a 90 or above to pass,” Enea says. He had a constant feeling of pressure—in addition to long hours at the workplace, he had to study for the exams at home. “We had a tech exam every month that was mandatory, they'd say, 'Just take your exam between calls,' kind of downplay it, but you needed to really focus on it,” he says.

In addition to the technical skills and time pressures for the job, doing customer service in a high-pressure environment requires a great deal of what sociologist Arlie Russell Hochschild called “emotional labor.” In her book The Managed Heart, Hochschild explained emotional labor as work that requires a person to “induce or suppress feeling” in order to create the proper state of mind in others. In the case of workers like Enea, that often means managing the anger of some very entitled people.

“If it was just an issue with a client who had a sticky key, that's a really simple call,” Enea says. “But if the system went down, just blacked out on the client, he's going to call up very angry. He's a stockbroker, working with a lot of money, it could be very stressful. Everyone knows that our department really had to have tough skin to deal with these clients, they could be very nasty.”

In addition to all of the other ratings and metrics that the GTEC workers had to worry about, their very tone of voice when talking to a customer was graded by the bosses listening in on the call. They were required, Enea says, to adjust their tone and style based on the customer's reaction—if they simply maintained a calm, professional tone evenly throughout the call, this could actually be construed as a negative.

Enea left Bloomberg in 2010; his lawsuit is currently in discovery, and Guerra says that they're renewing their motion for class status at the end of this month.

As news continues to break about government and corporate surveillance of private citizens' phone calls and emails, it's worth noting that many people already face intense surveillance on the job. While we debate questions of freedom, security, and privacy, perhaps some of the companies that are contributing to the broader surveillance culture—and the ways in which that surveillance culture is wielded to control workers and increase productivity—deserve a closer look.