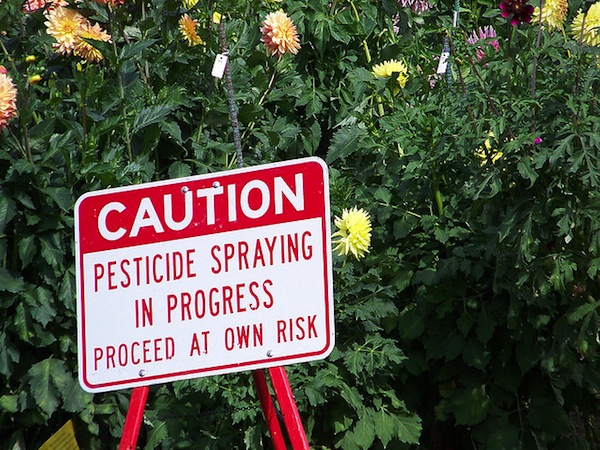 Farmworkers routinely exposed to harmful pesticide chemicals have been fighting a legal battle with the EPA for years.   (jetsandzepplins/Flickr/Creative Commons)

Some lawmakers in Washington may be losing sleep in the coming weeks as they mull over proposed immigration reform legislation. But many migrant children are haunted at night for a different reason—the quiet nightmare of noxious winds that fill their bedrooms with toxic fumes, a hidden chemical disaster looming over the fields where their parents work.

The promise of legalization through legislation won’t bring relief for those families, who toil on industrial farms and, with or without work authorization, labor every day in poisonous environments. Regulators and lawmakers have largely ignored these chemical hazards; the Environmental Protection Agency (EPA) has not updated its Worker Protection Standard for pesticide exposures in 20 years. So advocates for farmworkers have taken their struggle to court.

Pesticide Action Network of North America, United Farm Workers and other public health and worker organizations filed a petition on July 24 in the 9th Circuit federal appeals court in San Francisco to compel the EPA to enact new pesticide protections for children. The groups, represented by Farmworker Justice and Earthjustice, are specifically demanding regulations on pesticide “drift”: the toxins that waft from the crops to the kitchen tables and playgrounds of surrounding neighborhoods.

The petition, urging action on an earlier challenge filed in 2009, specifically demands that EPA evaluate pesticide drift risks and implement safeguards such as buffer zones “near homes, schools, parks and daycare centers, or wherever children congregate.” Studies have linked pesticide exposures to reproductive health and childhood development problems as well as cancer and respiratory ailments.

A recent report by Farmworker Justice highlighted the experience of Graciela, a fern crop worker whose daughter was diagnosed with leukemia at 15—a condition Graciela attributes to the health risks the family faced when they went to the fields together:

In order to cut the ferns and get those nice long stems that we need, we have to put our faces practically down into them. I realize now how dangerous this is. We are breathing in those pesticides all day long, and how could they not cause us harm.

The current litigation focuses on the EPA’s failure to act on a 2006 congressional mandate to issue protections for children against pesticide drift. But the agency has a long track record of heel-dragging on many pesticide issues.

Due to a division in the regulatory structure, pesticide safety for farmworkers is governed by the EPA, rather than the Occupational Safety and Health Administration (OSHA), which regulates chemicals in other industrial workplaces. Under the current weak EPA standards, workers are generally offered only minimal safety information on pesticides. Moreover, with lax labeling requirements, workers often cannot read the English labels on pesticide products that state hazard precautions and instructions for safe handling and decontamination. Earth Justice points out that the EPA’s standard “is far more lenient than OSHA rules,” revealing a structural inequity in the labor regulatory regime. Farmworker activists went to Washington in July to urge officials to enact measures such as requiring protective equipment and monitoring exposed workers’ health.

According to Farmworker Justice, farmworkers—comprised mostly of Latinos, some documented, some not—“suffer more chemical-related injuries and illnesses than any other workforce nationwide.” The official estimate of 10,000-to-20,000 pesticide poisoning cases each year is likely undercounted and does not take into account the ripple effects on workers’ children, who are exposed both to drift and to exposure from their parents' chemical-laden clothing after work.

Exacerbating the chemical risks of the job are steep barriers to healthcare access. Advocates report that less than a fifth of farmworkers are insured by their employer. While the federal government provides some health facilities for migrants, a lack of paid sick leave deters many from seeking care at designated clinics.

For both workers and residents of downwind communities, Virginia Ruiz, Director of Occupational and Environmental Health with Farmworker Justice, tells Working In These Times via email that the key to effective regulation is to take a proactive approach, by limiting or preventing exposure:

If pesticides must be used, ensure that they will not cause harm to workers, their families, or surrounding communities. Provide workers and their families with adequate information to avoid exposure and to recognize symptoms of exposure. After the fact, doctors may not know how to recognize or treat pesticide illness; workers may not recognize symptoms or have the ability to seek medical treatment. From the perspectives of medicine, economics and justice, it makes much more sense to prevent harm.

Beyond pesticides, many other, arguably more acute dangers stalk workers in the field, ranging from heat exhaustion, to physical and sexual abuse, to wage theft—along with the attendant abysmal poverty and miserable housing conditions. All these issues are endemic to a socially and legally marginalized labor force.

But the environmental and social inequities plaguing the fields lie beyond the sightlines of Washington. Despite public concerns over chemicals in our produce, farmworker pesticide safety is routinely overlooked in political conversations on agriculture and public health. Conversely, the immigration debate tends to ignore migrant farmworkers' everyday struggles for fair treatment at work.

When inhaling clouds of toxins is part of your job description, getting a green card is not your biggest problem. For now, these migrants are just yearning to breathe free.