Carnivals Are No Picnic for Migrant Workers 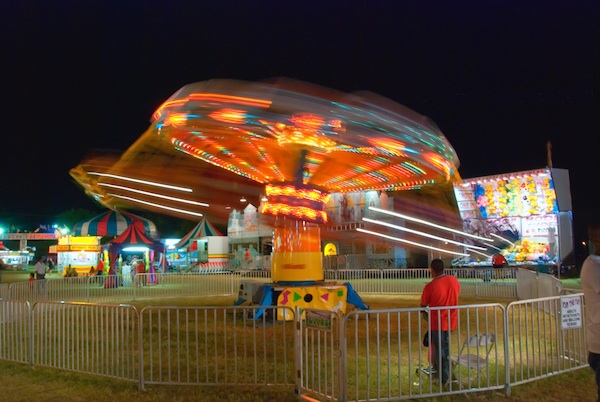 Migrant workers who set up and take down rides at traveling fairs, like this one in North Texas, complain of wage theft and grueling hours. (Double H Photography/Wikimedia Commons).

A trip to the carnival is the quintessential American summer pastime. But for workers who run the show, the hard labor of making our holidays carefree can be shockingly grim.

A lawsuit lauched last week by two migrant workers illustrates the ugly side of the leisure industry. Over a period of several years, while park patrons enjoyed the fun and rides of the Butler Amusements, the migrants say they were systematically exploited. The suit, filed in a California federal district court, lists them only as John Doe 1 and John Doe 2, because, as is typical in this sector, they fear retaliation from labor recruiters in their hometowns in Mexico.

A decade ago, the workers paid a recruiter hundreds of dollars just for the privilege of arranging a coveted job in the United States. But, they say, in approximately seven years working for Butler, they were consistently underpaid for their drudge work—setting up, breaking down, transporting and maintaining machinery and equipment at industry giant's numerous fair sites, which stretched across California, Arizona, Nevada and Idaho. On a typical day they toiled 10 to 14 hours for wages that amounted to about $5 an hour, they say.

These carnival workers were not the undocumented migrants of the "underground economy" as depicted in the news. They were legally hired, thanks to the federal H-2B visa program for temporary foreign labor. In other words, the lawsuit underscores the fact that even with official papers, many "guestworkers" have virtually no power to resist abuse.

According to a recent report by Centro de los Derechos del Migrante (CDM)—the advocacy group that, along with Legal Aid Society–Employment Law Center, is representing the Butler workers—the fair and carnival industry relies on the H-2B visas to fill slots for exhausting, often hazardous seasonal work in a business built on itinerant entertainment and fast profits. Under the influence of a powerful hospitality and leisure industry lobby, Congress has maintained a large H-2B visa program, currently capped at 66,000 H-2B visas annually, to staff hotels, resorts and entertainment facilities. While the leisure sectors in general are fueled by a transient, precarious workforce, the industry of seasonal amusement businesses, like summer carnival companies, which in 2011 secured about 5,000 H-2B visas, mostly from Mexico, benefit from especially lax oversight under federal labor law.

The cheap thrills come at a high price for workers. Employers often withhold or underpay wages, or pay out only in lump sums, and workers could end up earning under $300 a week. Wages are further undercut by massive debts owed to predatory labor recruiters in Mexico. One worker interviewed in the report said a workday could run as long as 24 hours straight if he had to break down and set up a ride. Another worker lamented, “We couldn’t even support ourselves, let alone send money home, which is why we came.”

For traveling carnival shows, the migrants pass through various states with different labor regulations, which poses an obstacle to monitoring employers and enforcing workplace protections.

Labor recruiters also help silence migrants. According to the report, “Because word of mouth is so important to recruitment, workers often fear speaking up in any way that may interfere with their relationship with the recruiter, as it could also impact the ability of their family and friends to obtain H-2B employment.”

As a parallel to the agricultural guestworker system, the H-2B program funnels tens of thousands of temporary workers, largely from Mexico and Central America, into non-agricultural sectors such as hotels and seafood processing, in addition to the fair industry. The program has been plagued with various controversies over discrimination and exploitation, particularly wage and hour violations. Earlier this month, Jamaican H2-B workers protested against wage theft and exorbitant recruitment fees they endured as temporary cleaning workers in luxury Florida hotels, and called out their contractor for threatening to deport them if they complained.

CDM’s research shows that employers often pay guestworkers below the “prevailing wage” that is federally mandated in order to prevent the erosion of industry pay standards. The systematic violations thus aggravate the already poor working conditions across the hospitality sector, turning the industry’s justification for hiring migrant workers—that Americans are simply unwilling to endure the harsh labor conditions—into a self-fulfilling prophecy.

Despite the vulnerabilities that guestworkers face under the current system, immigration reform could dramatically expand the role of labor visa programs in the workforce. The Senate proposal would create a new "W visa" for lower-wage workers that offers somewhat more flexibility for employment and residency, with a variable cap of up to 200,000 workers annually. Emerging House reform proposals would reportedly boost guestworker visas to about 400,000 per year. Meanwhile, many conservatives fiercely oppose reforms that would open opportunities for guestworkers to gain citizenship.

The Senate bill would strengthen some regulations: whistleblower protections against retaliation for  visa workers who expose abuse, restrictions on exorbitant fees charged by employers or recruiters, and enhanced transparency in the recruiting and hiring process. Prevailing wage standards for guestworker programs would also be tightened, though advocates point out that some companies, including seafood processors, can still evade certain wage regulations through industry-based loopholes that exempt them from federal standards for calculating wages.

Activist groups such as CDM want a restructuring of guestworker programs that goes beyond the current piecemeal proposals in Congress. Though a guestworker system by definition creates a divided workforce, an essential step toward equality would be guaranteeing guestworkers the freedom to change jobs. Currently, the lack of visa “portability” means bosses have vastly disproportionate leverage over guestworkers' labor conditions. Without freedom to switch employers, labor visas will always serve as legal indentured servitude for migrants--a surplus army of workers who are automatically disempowered compared to their citizen counterparts.

The case of the H-2B workers of Butler Amusements reveal the real price of our summer escapades, and how the economy of leisure is subsidized by the politics of migrant exclusion. Behind the fantasy worlds we rent for a day are countless John Does who pay dearly for a shot at an American Dream and get tricked into a nightmare.