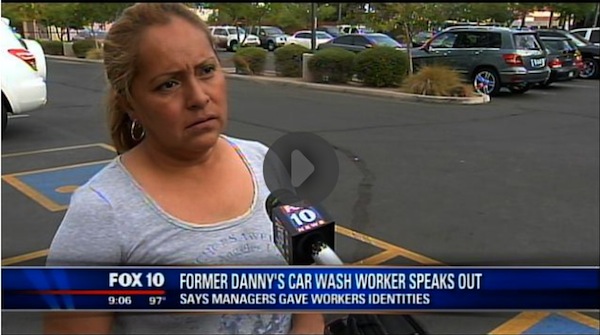 After months of partisan squabbling over immigration reform on Capitol Hill, the legislative discussion may again be sidelined as lawmakers take on debates on war and the deficit. But for many immigrant workers, the clock is ticking.

For one group of workers in Phoenix, each new day in the U.S. feels like it might be the last. Federal agents raided their employer, Danny’s Family Car Wash, in Phoenix last month, rounding up more than 200 workers. Some remain in detention, and all were left jobless and deeply shaken, fearing that at any minute they might be swept up into the Obama administration’s record surge of deportations, now approaching two million “removals" during his tenure.

The Immigration and Customs Enforcement (ICE) agents targeted 16 locations of the Danny’s Car Wash franchise following a two-year investigation into suspected fraud and identity theft—a scary-sounding term that refers to the use of fake Social Security numbers and other documents in hiring undocumented workers.

According to an ICE spokesperson Amber Cargile, the target of the raid was the management, not the workers. Drawing a contrast with the more aggressive mass worker arrests of the Bush administration, the she told the Arizona Republic that the round-up was a routine action focused “on the arrest of the employers and managers [and] supervisors."

But while the managers were nabbed on charges of immigration and labor-related violations, the workers were caught in the crossfire. ICE released most of them but continued to hold 30 workers on immigration charges, claiming that they had "criminal records or other reason to be detained," according to the Arizona Republic. And the agency plans to interview the detained workers "for the criminal investigation, obviously, to see if they’ve got information that will be relevant to our case.”

According to workers' statements to local media and in the official indictment of Danny's, reported that management had helped them take on false names as a way of circumventing E-Verify, a controversial identity screening program that some employers and state governments have instituted as an immigration enforcement tool. Speaking with Fox News Phoenix, Hortencia Jaimes, who was detained and later released, recalled that the employees screened out by E-Verify were fired and rehired under “new” identitity; the alternative, they were told, was losing their job:

The managers gave the employment number. It was a number that belonged to people who used to work at Danny's. They would tell you, you can keep working we got you a new number.

Paradoxically, the pending immigration reform legislation would place immigrants like the Danny's carwasheros in an even tougher bind; E-Verify and other punitive enforcement measures are embedded in the massive new Senate bill. Since E-Verify was first piloted a few years ago (Arizona instituted the system statewide in 2008), its implementation has been stalled by technological glitches, data errors, and legal concerns about privacy. Civil liberties advocates say that such intrusive enforcement measures—which may soon be codified in the pending immigration reform bill—merely drive undocumented workers further underground and stoke terror in workplaces where workers feel constantly under threat of deportation.

Aside from the alleged violations of E-Verify, buried in the local news report were indications of a more significant scandal—violations of the workers' labor rights:

Other former workers told FOX 10 the company overworked them, didn't give them many breaks, and many employees haven't been able to cash their checks since the raid.

The case underscores how federal authorities neglect the labor rights of immigrants even as they crack down on "illegal" employment of the undocumented. The administration has proven far more adept at criminalizing low-wage migrant workers rather than redressing the abuses they suffer in an apartheid labor system.

The former carwash workers are demanding not only the release of their colleagues still in custody, but also petitioning the employer for back wages, with the public support of local activists. Caroline Picker, an organizer with the civil rights group Puente Arizona told In These Times last week via email that workers are holding weekly organizing meetings:

The workers are continuing to organize, to reclaim lost wages as a result of the raid, to get those still detained released, and to organize themselves in the face of such trauma and violence. Even for those who are not in deportation proceedings, they and their families are now living in fear, with the loss of income. All those detained were told by ICE that they would be deported if ever caught working again.

Caught between deportation and exploitation

The Phoenix raid is emblematic of the Obama administration’s zealous pursuit of undocumented immigrants through so-called “paper raids,” auditing workplaces and then targeting employers with threats of fines and other penalties. They also partner with regular police to cast wide immigrant dragnets at workplaces and in local neighborhoods. With Congress mulling over a massive reform bill in Washington, these ongoing crackdowns seem like a slap in the face to immigrants anxiously awaiting relief from Congress. Earlier this year, janitors and labor advocates in San Diego lashed out at federal lawmakers when protesting workplace audits of two custodial companies, which they said would lead to the mass firing of 500 workers.

“The janitors that come and clean your buildings would qualify for immigration reform when it gets enacted by Congress. So why do this now? It’s not necessary," said SEIU coordinator Sandra Diaz in an interview with KPBS.

Yet immigration reform might actually worsen the plight of many undocumented workers. Yes, Democrats have touted the “bipartisan compromise” bill just passed by the Senate as a deal to allow millions to legalize through a long, complex and costly process. But in reality, according to progressive policy analysts, the "path to citizenship" may end up leaving out several million people who fail to meet income requirements or pass strict background checks and other bureaucratic obstacles. And the bill is also stuffed with measures that would intensify enforcement and expand the border patrol--portending even more mass prosecutions and deportations.

Those punitive measures will fall hardest on low-wage workers like those at Danny’s, who are doubly threatened by the deportation system and a oppressive labor hierarchy. The carwash industry is known for abusive, dangerous conditions and abysmal wages. In New York and Los Angeles, efforts to organize carwash workers, led by unions and community activists, have seen some success, but workers are still subjected to toxic hazards at work and exhausting schedules, and have virtually no recourse against unscrupulous employers.

In a report by the organizing campaign Wash New York, one worker testified: “I came to this ‘land of opportunity’ with so many hopes, but I have become disillusioned about being able to help my family. The treatment we receive makes us feel powerless. They yell at us, they disrespect us, and they treat us as if we are not even human beings.”

Back in Phoenix, Jaimes can't spend much time thinking about Washington’s next move when she lives with the daily terror of being ripped apart from her family. After she was released from detention, she told Fox News that throughout the ordeal, "I was scared and thinking about what am I going to do about my kids."

That is sadly a question that most in Washington don't want to spend much time on these days. People like Jaimes may  wash their cars, manicure their gardens and serve their coffee each day--but they are invisible in the legislative chambers, where lawmakers endlessly debate how best to “secure the border.”