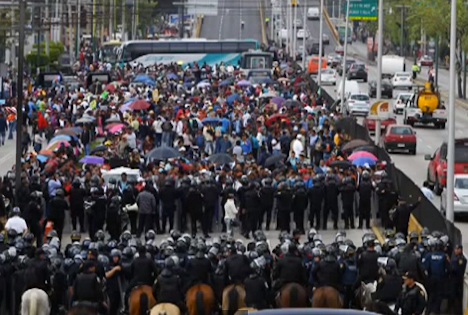 In Mexico City, school teachers are meting out some serious discipline to a government gone awry.

For the past several weeks, the metropolis has pulsed with a labor insurrection. There have been fierce union-led rallies, clashes with police, and mass demonstrations that have paralyzed the city, climaxing with an estimated 12,000 teachers storming the streets on Wednesday. The catalyst is Mexico’s new education reform legislation, championed by President Enrique Peña Nieto and his PRI party, which teachers union activists blast as a thinly veiled attack on organized labor.

After lawmakers overwhelmingly voted to implement the reforms last week, demonstrations flared across the capital, blocking traffic and drawing crowds around the French, Spanish and U.S. embassies. The National Education Workers Coordinating Committee (CNTE), a radical union faction representing a third of Mexico’s public school teachers, has mobilized tens of thousands of protesters. The conflict is now widely seen as as a principle test of Peña Nieto’s political strength, symbolizing the class and ideological tensions between Nieto's center-right PRI party and Mexico’s embattled leftist movements.

The government maintains that the law, which amends articles of Mexico’s constitution that guarantee the right to public secular education, is necessary for improving management of Mexico’s school system and raising the quality of teaching. Reflecting the same neoliberal “reform” impulse that politicians have pushed in the United States with charter schools and draconian testing systems, the idea is to tighten controls on educators and students by imposing standardized tests and evaluations. The reforms would also ease the process for firing teachers, aiming to dismantle traditional union control and cronyism in employment decisions. As in the U.S., the "reformers" are pushing "merit-based" performance measures other market-oriented reforms.

Teachers see this as an assault on a sacrosanct public institution and view the law as a union-busting campaign masquerading as public-minded reform. In a Labor Notes report last December, Dan La Botz quoted Rubén Núñez Ginés of SNTE Local 22 in Oaxaca:

We consider the educational reform, and especially any changes to Article 3 of the Constitution, to be an attack on the Mexican people... The project hides its real objective: the labor issue... It is an attempt to do away with collective bargaining in education and to institute instead individual contracts based on evaluations with a punitive character, in order to justify firings.

The debate has highlighted a three-way power struggle in education: The radical teacher activists of the CNTE are driving the ideological rank-and-file opposition to the government proposal, yet they are simultaneously opposed to the mainstream leadership of the teachers union, SNTE, which has also criticized the law. The SNTE is reviled by both left and right for its deep corruption and notoriously dictatorial leader Elba Esther Gordillo, who was recently imprisoned on corruption charges.

Gordillo’s union, however, successfully lobbied for an amendment to the law that softened some of the provisions aimed at easing the termination process for teachers. But the CNTE’s campaign has linked many communities in a coalition of opposition to the PRI’s anti-labor, pro-economic liberalization agenda. Along with stripping power from the teachers unions, the administration has also pushed to open the state oil company to foreign private investment, which has also drawn deep resentment from Mexico’s labor left.

The intensifying unrest in Mexico City echoes the 2006 teacher strike in Oaxaca, during which activists seized the city for several months and inspired international labor solidarity campaigns. The current teacher-led protests in Mexico City have similarly sparked a broad-based grassroots revolt, met with harsh repression by security forces to clamp down. The alternative media collective SubVersiones recently issued a video showing the security crackdown on protests and “arbitrary detention” and abuse of fellow journalists.

The radical faction CNTE is not opposed to restructuring the education system, but argues that this must be done democratically, taking into account the vast social and economic inequalities ingrained in Mexico’s struggling school districts. Opponents representing indigenous communities also point out that Mexico’s linguistic and ethnic diversity complicates the push for a single, centralized educational standard. Oaxaca elementary school teacher José Alfredo Martinez tells The Real News:

We are demanding and are in agreement with an evaluation, but an evaluation that is not standardized or punitive, an evaluation that takes into account the social context in which we develop our educational practices. It is not possible that a student from the mountains of Oaxaca or Guerrero will receive the same standardized test as a child who lives in a large city like Monterrey or Guadalajara.

These criticisms align with the arguments of grassroots education activists in the U.S., who say that many mainstream education reform measures, such as mass school closings, end up hurting the same poor, disadvantaged students that reformers purport to be lifting up.

Speaking at a recent rally of the CNTE, a protester summed up the ethos of the teacher rebellion:

Today we are mobilized by the storm wind of millions of teachers. It is a lie that we are a minority! The teachers. The students. The indigenous communities. We are millions in this country! And we are the ones leading these occupations in the streets! In these marches. We are the teachers. We are the workers. We have identity, roots, history! And this is what we have come to defend before this tyrant who wields the economic and political power in this country and in the world.

If the teachers do not prevail in their resistance to PRI’s education policies, they have set the stage for a much wider-ranging battle over the role of labor in Mexico’s social future. And if the past few weeks portends anything, it is that the PRI may have taken the ballot box, but the unions have the street on their side.