Yes, 87,500 Macy’s Workers Won’t Get Thanksgiving Holiday, But That’s Not Their Biggest Concern 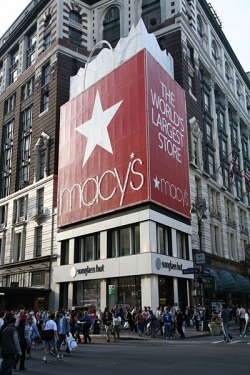 For the first time in 155 years, Macy's will open on Thanksgiving Day. (Wikimedia Commons/Daniel Schwen)

Department store chain Macy’s, known for its lavish Thanksgiving Day parade, is taking heat for canceling the holiday for many of its 175,000 employees. On Oct. 13, the Chicago Sun-Times reported the news that Macy plans to break with its 155-year practice of closing its stores on Thanksgiving Day.

Macy’s spokesperson Holly Thomas confirmed to Working In These Times that about 750 of the company’s 850 stores nationwide will be opened at 8 pm, requiring some 87,500 workers to give up a part of their traditional family holiday. But she stressed that no employees would be required to report to work against their will and that a sufficient number of volunteers had already been recruited. Further, those workers will all receive time-and-a-half holiday pay for their full shifts, Thomas says.

And surprisingly, the largest union local representing Macy’s workers had a similar take. Gail Rogers, Secretary-Treasurer of Retail, Wholesale and Department Store Union Local 1-S, which has over 3,500 members in New York City and nearby Westchester County, says she sees no reason to criticize Macy’s as long as the company honors its union contracts. “We received notice a couple of months ago, and Macy’s will be honoring our contract. Nobody is going to be forced to work if they prefer to celebrate the holiday, and the volunteers will all be getting time-and-a-half. Plenty of our members are willing... so there aren’t a lot of complaints,” she says.

So is this a tempest in a teapot? Rogers says that there is still one concern: While union workers are protected, non-union workers have no one to ensure Macy's keeps its word.

“My concern would be for the non-union workers” at Macy’s and its subsidiary Bloomingdales, Rogers says. “Without a good union contract, it’s easy to see how the voluntary nature of the work, and the premium pay, might fall by the wayside as time goes by.”

Only about 10 percent of Macy’s workers are unionized, according to the company’s most recent Securities & Exchange Commission disclosure statement, with pockets of union strength in New York, San Francisco, Seattle, Boston, and the greater Washington, D.C. metropolitan area. Aside from RWDSU, workers are unionized through the United Food & Commercial Workers Union (UFCW), Teamsters, Service Employees International Union (SEIU) and Unite Here.

Both RWDSU and UFCW have organizing efforts underway to increase union membership at Macy’s stores, but the company is offering stiff resistance.

For example, Seattle-based UFCW Local 21 is currently trying to organize a Macy’s store in Silverado, Wash., in hopes of adding to the four stores it already represents in the area. A June 28 report in the Kitsap Sun indicated the union had filed unfair labor practice charges against the store in the bitter dispute. UFCW Local 21 Communications Director Tom Geiger did not respond to several requests for comment from Working In These Times.

A similar situation in the San Francisco Bay area culminated in July 2011 with a union election victory by UFCW Local 5 at a Macy’s store in Pleasanton, Calif. In a press statement at the time, Local 5 spokesperson Mike Henneberry said the union had overcome “aggressive employer resistance” to win the National Labor Relations Board-supervised election. The victory increased the number of Macy’s stores under Local 5 contract from two to three. Like Geiger, Henneberrry did not respond to requests for comment this week from Working In These Times.

Yet another organizing effort by Dedham, Mass.-based UFCW Local 1445 is even receiving special attention by federal regulators. Local 1445 is currently seeking a union election among a small group of cosmetics and perfume salespersons at the Macy’s store in Saugus, Mass., but the company is fighting the election as an improper interpretation of federal labor law. The case is now before the NLRB, but the U.S. Chamber of Commerce has dubbed the cosmetics and perfume sales staff an improper “micro-union” and is encouraging federal lawmakers to support a new labor law to restrict such organizing efforts. Local 1445 President Rick Charette did not respond to a request for comment.

RWDSU’s Rogers tells Working In These Times that efforts to expand the jurisdiction of Local 1-S have been met with similar determined resistance over the years. The organizing efforts contributed to an especially difficult contract negotiation in 2011. That was the same year that Local 1-S has a successful campaign to organize new Macy's workers in the Elmhurst neighborhood in city's borough of Queens.

For the unions then, the end of the Thanksgiving holiday at Macy's is not so much an occason for outrage as the latest step in a long national trend that reinforces the need for union representation. As Macy’s noted in its own defense, Thanksgiving openings are increasingly common among large retailers anxious to begin the Christmas shopping season. Wal-Mart, for example opened its doors at 10pm on Thanksgiving in 2011, and pushed the time back to 8pm in 2012. Employers asking for more from workers is a tale as old as business; and historically, it's been the job of unions to make sure workers' rights aren't trampled.

One non-union Macy's employee, Lorraine Riley-James of Chicago, is peeved by the Thanksgiving openings. "It's just unfair. It's selfish. I hate it," she says. An activist in the Chicago-area Fight for 15 campaign for higher wages in the retail and fast food industries, Riley-James regards the Macy's decision as a unilateral move to take away one of the few paid holidays enjoyed by retail workers. "They really took it away from us last year when they started the midnight openings [on Black Friday]. ... You have to come in earlier to get ready, [so it] ruins the holiday."

Riley-Jones says she plans to contInue her activism for higher wages and better benefits for workers at Macy's and elsewhere.