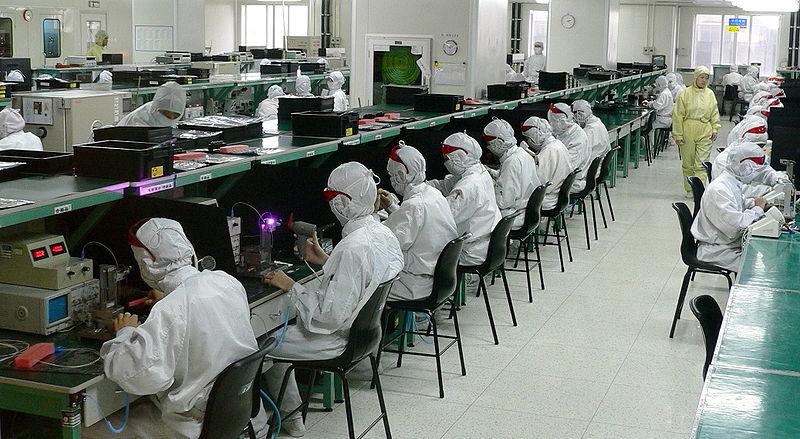 There is nothing newsworthy in the latest investigative report on working conditions in Chinese electronics factories—just the same old story, really: Once again, there's evidence of systematic exploitation of workers, suppression of labor organizing, poor living conditions and chronic economic insecurity for young workers. What has changed is the intensity of the industry's resistance to cleaning up the worst labor practices of China’s global manufacturing model. Even as a rising generation of young workers are increasingly disillusioned with harsh working conditions and dismal job prospects, high tech manufacturers are still taking the low road on their rights.

The report, authored by the Denmark-based DanWatch, with support from U.S.-based China Labor Watch and in collaboration with other European consumer advocacy organizations, describes disturbing workplace troubles at factories that supply the computer giant Dell.

It turns out that the chips and motherboards that bring modern efficiency to western offices are made under pretty backward conditions. Through site visits and personal interviews with workers at four factories that supply Dell (all managed by Taiwan-based companies) in Jiangsu and Guangdong, researchers uncovered evidence of numerous violations. At all four of the facilities, employees reported working long hours that sometimes totaled more than 60 a week or exceeded the legal overtime cap of 36 hours per month. In some cases, workers reported working seven days straight, without a day off. This non-stop schedule violates the voluntary standards Dell agreed to under the framework of the Electronic Industry Citizen Coalition (EICC), an industry consortium that promotes ethical sourcing.

“Because of the welding, the temperature is uncomfortably high and the smell is toxic. We don’t get mouth protection and I get skin irritation if I touch my face at work,” she says.

Zhao explains the work is exhausting because of the repetitive movements and long hours. “We have to stand up the entire 12 hour shift; to sit down, you have to ask for permission.”

Many, according to investigator interviews and observations, were living in cramped dormitories, with poor quality food and a single toilet for as many as 50 people. Often, employers hired “student interns” to do essentially the same work as regular full-time employees, but with less pay and job security. China Labor Watch Program Coordinator Kevin Slaten tells Working In These Times that this is common practice in an industry bent on squeezing every last drop of profit from its workforce:

The tremendous use of student workers and dispatch or temporary workers is in part a symptom of brand companies, like Dell, driving down prices for production. The factories run on relatively slim profit margins, and the factories attempt to use every trick in the book to cut labor costs, including the use of illegally large proportions of temporary workers.

DanWatch's investigation aims to implicate the whole electronics-manufacturing sector, but targets Dell specifically because it is a major supplier of electronics to European procurement markets, including corporations and government institutions. Dell has responded to the findings by vowing to strengthen its internal monitoring and claiming that “corrective actions plans are in place” for noncompliance issues it has detected (a recent corporate social responsibility report revealed that most internal workplace audits had also found excessive working hours).

Labor advocates are pessimistic about the industry’s glass-half-full promises.

Following a series of worker suicides at the Taiwan-owned electronics manufacturer Foxconn that provoked public shock, numerous tech companies—most notably Foxconn client Apple—vowed to address supply-chain labor problems and exploitation. But watchdog groups have repeatedly questioned the effectiveness of these voluntary efforts, as they allow multinational corporations to effectively control the oversight of their own supply chains, often through quasi-independent, management-friendly auditing agencies.

But Dell is hardly the only offender in China’s bustling global manufacturing sector, nor is it the first to issue dubious assurances to consumers that their favorite gadgets are ethically made.

Late last month, a group of student investigators who went undercover as workers at several factories in the southern city of Shenzhen revealed that “trade unions in these factories played no effective role in representing the workers or in upholding their rights,” while abuses such as inadequate safety protections, excessive working schedules and minimum-wage violations were rife. The experience is typical for the countless young migrant workers who fuel the tech manufacturing sector. China’s urban economy relies heavily on a vast army of constantly churning migrant labor, and the workforce is becoming increasingly unstable as frustration with the low wages and drudgery of factory work has led to scores of uprisings and wildcat strikes in recent months.

The banner of “corporate responsibility” isn’t enough to quiet these workers’ troubles. What they need instead is a real voice at work, in the form of an independent labor movement. China generally lacks real independent unions, separate from government-affiliated unions that typically work in tandem with management. At several of the audited Dell supplier factories, workers reported "no knowledge of whether they have a trade union or workers’ representative at their factory." While worker unrest has roiled, activists have accused Wal-Mart, Foxconn and other companies of suppressing or resisting worker organizing in the Chinese workplaces that drive their supply chains.

With the indigenous labor movement only in its fledgling stages, consumer-led campaigns and groups like China Labor Watch might help encourage worker activism. But in terms of achieving systemic, sustainable change in the industry, Slaten says, “Even if consumers could act in unison, the answer would not be to boycott electronic products manufactured in a given Chinese factory. From the perspective of worker interest, this will only serve to get a great number of workers laid off.”

For workers' interests to supersede corporate interests, change will need to start where the products do: on the assembly line, where workers can act in unison and stand up for their rights. Outside China, the rest of us—community groups, unions, and ourselves as individual consumers—have a responsibility to keep global public pressure on multinationals, showing solidarity with workers both by getting their back and by making sure the bosses get out of their way.

Correction: The names of the locations of factories now properly cite Jiangsu and Guangdong, along with Shenzhen in particular, as the sites studied.