Qatar’s World Cup Spectacle Brought to You by Slavery 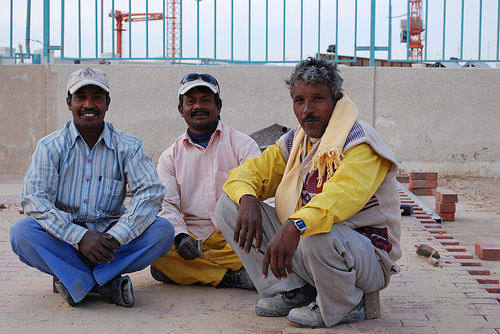 Migrants laboring in Qatar. Most are underpaid and face torture or abuse. (Photo by WBUR/ Flickr)

The big controversies surrounding Qatar as the site of the 2022 World Cup have been the shady bidding process and fears that the desert heat will ruin the soccer games. But in the past few days, the spotlight has finally begun to move to longstanding concerns over the treatment of the migrant workers who will be building the physical infrastructure for the sporting bonanza.

Throughout the summer, according to an investigation by Amnesty International [PDF] released this week, the future site of the sporting spectacle became a death trap for the Asian workers brought in by Qatar and its booming construction industry to work on the building sites of the planned World Cup facilities, including commercial areas and transportation infrastructure.

Amnesty found that the workers were encamped in sweltering heat, fell from precarious heights and suffered heart failure under the strenuous labor conditions. One Nepalese official described the entire system of indenture as an “open prison,” according to Der Spiegel. In light of dozens of reported deaths, union activists predict that up to 4,000 may die on the sites between now and the 2022 games.

Through interviews with the World Cup construction workers, the Amnesty investigators gathered horrific stories of an array of abuses, including "not being paid for six or nine months; not being able to get out of the country; not having enough—or any—food; and being housed in very poor accommodation with poor sanitation, or no electricity.”

Workers testified that migrants were frequently forced to work for poverty-level wages or sometimes none at all. Often, they said, employers confiscated their identification documents, effectively holding them hostage out of fear of being detained for lacking papers.

Unfortunately, while horrific, these stories are far from unique in Qatar. More than 90 percent of the labor that fuels the country's oil-slicked economy is imported, typically brought in by recruiters from South Asian countries. Not only are these migrant workers non-citizens; in the eyes of their employers, they are barely human. They live in barbaric, squalid dormitories, their movement restricted, invisible under Qatari law and cut off from their home communities.

Under the transnational migrant “sponsorship” system, according to Amnesty, workers were drawn into the labor trade by recruiting agents who falsely advertised decent, high-paying work abroad–sometimes taking on heavy debt to secure a job. The byzantine residence permit system further disenfranchises workers. When employers illegally fail to arrange permits for workers, as was frequently the case in the shadowy migrant labor market, they generally cannot return home without paying extremely heavy fines. The restrictions on migrant workers' movement mean that “rather than protecting the rights of migrant workers, the government is adding to their exploitation,” Amnesty contends.

Underlying the whole system are fundamentally weak protections for labor organizing on the part of Qataris and migrants alike, as well as prohibitions on migrants forming trade unions. The lack of organization among workers means many migrants remain in the dark about their labor rights. One Nepalese worker explained to Amnesty, "There are many workers who keep working like donkeys, without asking a question. They don’t understand what is legally our entitlements, what our rights are."

Some have tried to challenge employers. According to the report, the Labour Ministry and the courts have each received thousands of worker complaints, many related to basic wage and hour and other labor issues. But due to fear of retaliation and the difficulty non-Qataris face in navigating the justice system, most aggrieved workers, according to investigators, probably do not go through with the complaint process in the first place.

One worker with the U.S.-based electro-mechanical engineering contractor Krantz Engineering wrote in a desperate letter to Amnesty in April 2013 about his lack of legal recourse for his abuse:

I am writing this email after lots of pain and struggle ... I have complained in several places like Labour court, Indian Embassy, High court, CID and National Human Rights Council Qatar but no any positive response from anyone of them ... I don't have money to eat food from last five days as I didn't get salary from last nine months.

Not all of the employers using this labor are Qatar-based—the report linked multinationals such as Hyundai Engineering and Construction and OHL Construction to the subcontractors building the World Cup-related facilities. In the case of Krantz, Amnesty discovered that one of the company's subcontractors was receiving technical training from a company called TEEX, which is affiliated with Texas A&M University. When questioned by Amnesty about the treatment of migrants, Texas A&M argued the firm “does not have any role in the management and supervision of the labor force at the facility.”

Amid international criticism from Amnesty and other organizations like the UN, Qatar’s 2022 Supreme Committee, a managing body for the preparation for the games, has vowed to address the reported abuses, and FIFA has issued similar comments. In a formal response to the Guardian published in September, the committee cited numerous labor protections available to migrants, including restrictions on passport confiscation.

But Sharran Burrow of the International Trade Union Confederation tells Working In These Times via email she is unconvinced by Qatar's promises. "Qatar continues to announce that it will reform the visa sponsorship system, yet nothing changes," she says. In the wake of mounting criticism over the human rights issues surrounding the event, she adds, “Unless Qatar reforms its ways, FIFA should re-run the vote for the 2022 World Cup.”

There is also a question of who is directly responsible for regulating labor issues. Amnesty's report focused on infrastructure construction related to the World Cup but not just the stadium itself—including transportation and supporting commercial facilities. In any case, the primarily responsibility, argue human rights advocates, lies with Qatar to reform its overall labor laws and to tighten oversight of private sector labor practices, particularly for international-sporting projects aimed at creating a global commercial spectacle.

This is not the first time FIFA has come under political pressure; earlier this year, populist protests erupted over the lavish costs of the preparations for the 2014 Brazil World Cup. Though FIFA generally urges host countries to comply with international human rights, the World Cup is notorious for inducing local labor violations. For example, labor activists have condemned FIFA for not taking strong enough action against Russia’s temporary suspension of key labor protections for the migrant workers at the building sites for the 2018 World Cup.