Workers Can ‘Don and Doff’ Off the Clock, Says Court 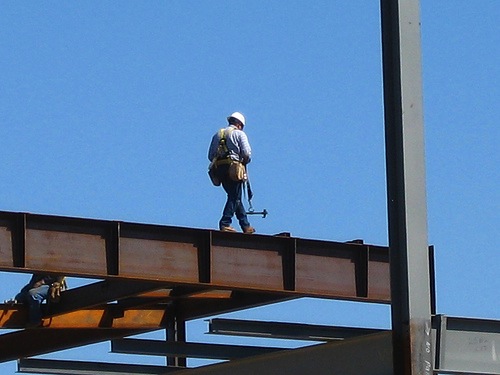 For workers in dangerous industries, safety should be non-negotiable. But the Supreme Court may have just given employers a little more leeway to put critical protections for workers on the table when bargaining over labor contracts.

In a unanimous decision issued last month in Sandifer v. United States Steel Corporation, the Supreme Court ruled against a group of steelworkers who argued that they should be compensated for the time they spend suiting up before and after their workdays, or “donning and doffing” protective gear including hard hats and safety glasses. Workers at U.S. Steel’s Gary Works in Indiana had sought compensation for what they believed were unpaid overtime wages, earned during their time spent changing into and out of their work clothes, which they argued was not properly clocked.

But the justices ultimately ruled that the steel company's labor contract did not require the company to count the “donning and doffing” of workers' clothes as paid overtime labor under the Fair Labor Standards Act (FLSA), meaning that the workers will lose their claim to back pay for the time spent putting on and taking off their gear.

The Sandifer ruling is limited from a legal standpoint, as it applies only to section 203(o), an obscure provision of the FLSA governing wage negotiations in collectively-bargained union contracts. According to an analysis in legal news outlet SCOTUS Blog, section 203(o), a 1949 amendment to the FLSA, “allows collective-bargaining agreements to exclude time spent ‘changing clothes’ from the work time subject to the statute.”

But the overarching labor principle raised in the case is the question of what should be negotiable when it comes to the gear that workers need to do the job. The workers (their union, United Steelworkers, did not file a brief in the case) argued initially in 2008 that time spent putting on crucial body protection is a basic part of their workday, and moreover, they were adding gear to their underlying clothes, not "changing" outfits, per se.

But the Supreme Court ultimately ruled, as summarized by SCOTUS Blog, “that the protective items worn by the workers—such as protective hoods, jackets, and pants—would ordinarily be described as clothes, even if they serve a protective function.”  This legal interpretation does not delineate between protective coverings and regular clothes that are donned specifically for the job, lumping together, for example, gear protecting workers from chemical burns with uniforms bearing the company logo, and affirming that in either case, the time workers spend putting on and taking off these times can be excluded from overtime in their union contracts. So under their contract, according to the decision, “the workers were not entitled to be paid for the time they spent putting on and taking off those protective clothes.”

Although it is still within the union's right to seek overtime coverage of this time in their contract talks, the fact that it is subject to negotiation gives employers one more bargaining chip for reducing overall compensation, says David Kern, a labor attorney representing the workers.

Kern tells In These Times via email that the ruling essentially "confirmed the nationwide trend... for courts to define 'clothing” under 203(o) to mean anything and everything that employees [don and doff] to do their jobs." (Aside from the Sandifer argument, this conservative trend has previously surfaced in lower-court rulings that have broadly lumped items like earplugs and knife holders under “clothes.”)

When the clothes provision is raised in future contract negotiations, Kern adds, "I’d say unions need to be a whole lot tougher on this point to protect the health and safety of their members."

The 203(o) provision stems from negotiations between U.S. Steel and the steelworkers union in the 1940s—an era when workers' “clothes” were simpler and more closely resembled everyday work clothes as opposed to the high-tech armor steelworkers wear today, writes Tom Carter at the World Socialist Web Site.

Today, the standard outfit is not such a casual affair; it consists of "flame-retardant pants and jacket, work gloves, metatarsal boots (work boots containing steel or other strong material to protect the toes and instep), a hard hat, safety glasses, ear plugs, and a "snood," (a hood that covers the top of the head, chin, and the neck)," according to the steelworkers' petition to the Court.

The oral arguments percolated with the justices' colorful banter about the evolving taxonomy of work clothes—which might encompass, for instance, the uniform of “doorman in an apartment house” as well as the band Kiss’s glam get-up.

To occupational safety advocates, though, the crucial role of protective gear is serious business, and the government has developed an entire regulatory system to govern employers' responsibility to ensure a safe workplace. For union and non-union workers, this is enshrined in the Occupational Safety and Health Act (OSHA) and extensive guidelines on the “Personal Protective Equipment” demanded in different industries, ranging from respirators to a full-body suit. Though the ruling in Sandifer does not directly alter any regulations, it reflects the pro-business approach to worker protections in the courts today, allowing a certain element of optionality in the conditions that help protect workers from hazards on the job. While the ruling may be relatively technical and narrow, safety advocates are troubled by the court’s focus on the semantic of what counts as “clothing,” rather than the broader safety issues at stake.

To Tom O’Connor, head of the National Council for Occupational Safety and Health, the bottom line is that “clothing that provides special protections from workplace hazards is protective gear.” So regardless of the technical definitions in the statute, he says, “[N]ot paying workers for time spent donning and doffing protective safety gear, whether you call it ‘clothing’ or ‘safety gear,’ sends the wrong message … about the importance of workplace safety.”

Given that employers in hazardous industries often prioritize profits over ensuring adequate protections for workers, labor advocates worry that Sandifer could bolster this lax attitude to workplace safety. Eric Schnapper, an attorney representing United Food and Commercial Workers (UFCW), which filed an amicus brief in the case, noted during oral arguments that in that union's experience, greater flexibility in negotiating rules on work clothes serves management's interests, because the companies already tend to treat this issue as "simply another bargainable item, like a holiday" and not "something unions are entitled to." For UFCW's members in poultry and livestock industries, he added, the work clothes they don for the intense, arduous labor of poultry processing would rarely “meet the... ‘it looks like clothes’ test. It's almost all gear.”

The fact that the High Court has sided firmly with United States Steel Corporation on the legal definition of work clothes could impact on other groups of workers, by shoring up a negotiating stance that puts, for example, chicken-slaughtering suits of unionized poultry plant workers on the same plane as a doorman's jacket. In light of the safety issues implicated in the decision, Kern says "The Court should have given much more in-depth consideration to the issue of OSHA requirements.” He believes that ultimately, the justices “failed to recognize the workers' argument that "if you define ‘clothing’ under 203(o) to include [Personal Protective Equipment], you put a union and an employer in a position to negotiate a less safe workplace."