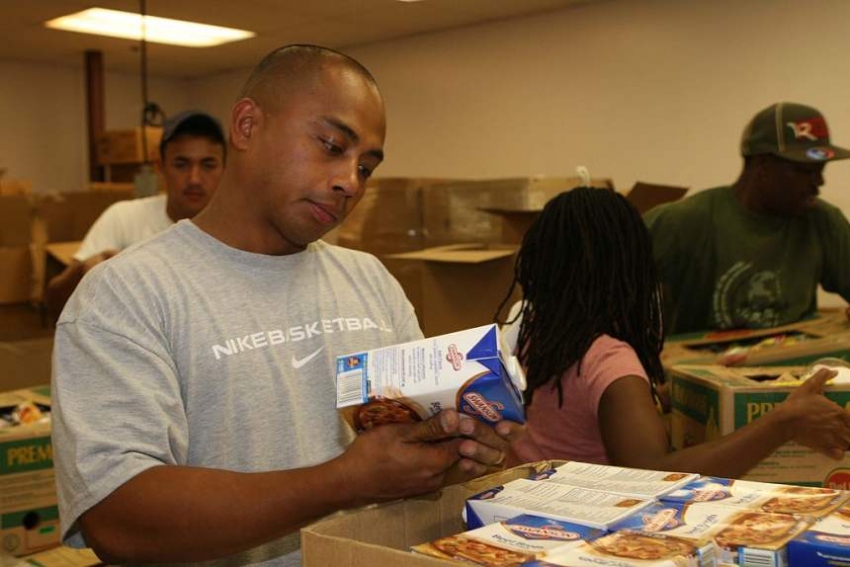 A volunteer inspects a food item for quality control at a Feeding America food bank. Feeding America predicts the SNAP cuts will be worth more meals than their entire annual distribution, and that food banks have already been struggling to meet demand.   (Cpl Aubry L. Buzek, Wikimedia Commons)

According to the Congressional Budget Office, cuts to America's Supplemental Nutrition Assistance Program—more commonly known as food stamps—contained in the farm bill signed by President Obama last week will harm 850,000 American households. Around 1.7 million people in 15 states will lose an average of $90 a month in benefits. Though the cuts won’t keep new people from enrolling, they will reduce payments to people who had previously been allowed to deduct their utility bills from their income.

Conservatives call this "closing a loophole." But in reality, it will reduce assistance for people whose incomes have not actually risen.

And it’s not as if this help is easy to come by. Despite the image propagated by the Right of Uncle Sam eagerly handing out cash to anyone who wants it, the process through which one qualifies for assistance is Kafkaesque. It seems, in fact, designed to keep people out. As I go through the task of obtaining assistance in California, one of the states that will be affected by the cuts, I am amazed that anyone is able to navigate the system successfully at all.

I was last employed full-time in 2010. Just as that job ended—and as I was moving from the East Coast to the West—I fell down a flight of stairs. The recovery was long and expensive, and since then I have only been able to find sporadic, part-time work.

Last September, when I ran out of savings, I applied for CalFresh (California's food stamp program) and Medi-Cal (California's Medicaid) by filling out an online application. In response, I received a paper application in the mail asking for the same information again. I filled it out, made copies of my driver's license, social security card and proof of income, and sent it in the old-fashioned way: through the mail.

As the year neared its close, I still hadn't heard back from either program. Our new insurance exchange, Covered California, began processing applications for Medi-Cal in October. Having gone through the Department of Public Social Services (DPSS) with no reply, I decided to try this route.

This second attempt yielded mixed results. In January, I received a state benefits card in the mail, though it came with a piece of paper that cautioned, "This does not mean that you are necessarily enrolled." I called Covered California to find out whether I was, in fact, insured, but reached a recorded message saying call volume was high and I should call back later. I found a number specifically for Medi-Cal; the woman I spoke with said she couldn't answer any questions about applications submitted through Covered California. She gave me yet a third number to call. When I did so, I got a message saying, "If you are calling about Covered California, please hang up and dial ..." And then it listed the number I had just dialed.

Confused about both my insurance and my food stamp situation—which I still hadn’t gotten any notice about—I eventually navigated my way through the web-maze of the California DPSS to send an email. Two days later, I got a call back. The woman kindly told me that although Covered California Medi-Cal was in the process of enrolling me, DPSS never received the information I had mailed in and so had canceled my application for food stamps altogether. She suggested I go to a local office and talk to someone in person.

At the DPSS office, I waited about three hours to meet with a caseworker, who began a new food stamp application for me. He asked what I did for a living. “I’m self-employed,” I replied. “I’m a writer.”

“How much money do you make a month?” he asked. I told him. “O.K., then just get your accountant to create a statement of your income and expenses for the last three months and fax it to me.”

“Um,” I hesitated, confused. “I’m having trouble affording food. How am I supposed to afford an accountant?”

“You said you were self-employed! Just ask your accountant.”

By now, it was early February; I had been in the process of trying to obtain assistance for five months. Because I had met with a caseworker in person and now had a case number, I was able to make an appointment online to see him again without the three-hour wait. At that appointment, he told me though he had received my fax, my application had not been processed in the two weeks since.

“Is there anything else you need from me?” I asked.

I had not been denied food stamp assistance, but neither had I been approved. As of now, I am still waiting.

In the meantime, the state benefits card I received has been covering prescriptions; because I am "not necessarily enrolled," however, I can't actually see a doctor. Although I applied for health coverage through Covered California, my case eventually made it to the same DPSS office where I was trying to register for food stamps. When I asked my caseworker about completing my Medi-Cal application as well, though, he informed me that I needed to speak to someone else about that. After submitting my driver's license and income statement—again—to a different caseworker in the same office, I am now finally "pre-enrolled" in a Medi-Cal plan. I've been told to call another 1-800 number in a few days to make sure the enrollment is complete.

The waiting room at my local office is chock full of women with children, the elderly and people with disabilities. I’m sure their processes are even more complex than mine. I am only navigating three government programs—Covered California, Medi-Cal and CalFresh. Others are navigating four, five or more, and may be doing so without the help of the Internet or a cell phone plan.

For many people, the cuts to food stamps contained in the farm bill will likely create even further bureaucratic nightmares. When and how it will happen is still largely unclear. Will people simply wake up one morning to find their assistance reduced? Will these individuals and families have to re-prove their lack of income? Will they even be told what they have to do? No matter what happens, though, one thing is for certain: America’s most vulnerable populations are going to suffer.

Regardless of how persuasive some people may find the conservative idea of the “welfare queen driving a Cadillac,” public assistance programs are not full of people taking advantage of loopholes in the law. They are full of American citizens with no other way to survive.

Holly L. Derr is a feminist media critic who writes about theater, film, television, video games and comics. She has been published by The Atlantic, XX Factor/Slate, and Ms. Magazine. Follow her on Twitter @hld6oddblend and on her Tumblr, Feminist Fandom.