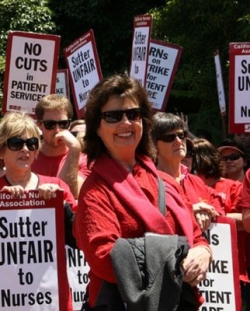 The labor movement has a new driving message for its legislative, educational and political work that should resonate with most American workers, especially those who have the least: Your pay is too damn low!

AFL-CIO president Richard Trumka put it less colloquially this week than the New York gubernatorial candidate who once ran on a single message: "Rent is too damn high." Organized labor will put “a laser focus on raising wages,” Trumka told reporters in Houston at the start of the winter quarterly meeting of the federation’s executive council.

Whatever the words, the case for action is strong. Wages have stagnated for all but the rich for more than a decade and fallen for low-wage workers, according to the Economic Policy Institute, a leading research institution on labor markets. Adjusting for inflation over the past four years, hourly wages for workers in the bottom 30 percent have fallen an average of 68 cents an hour.

Those trends, mirrored by the top 1 percent capturing 95 percent of all the new income growth following the end of the Great Recession, explain why inequality is growing, according to University of California, Berkeley economist Emmanuel Saez.

However, as Trumka notes, the general public, as well as leaders from “the Pope to the president,” have begun to express outrage over inequality. A minimum-wage boost has been increasingly on the U.S. agenda, with a $10.10 federal minimum proposed by Congressional Democrats and supported by Obama. Although the AFL-CIO is promoting the $10.10 minimum, Trumka says he favors a “living wage” standard set around $17 an hour, indexed to inflation.

“Wages are about what connects us all,” he told reporters, suggesting that labor’s campaign for a raise for all workers could bring old and new allies together in a powerful movement for economic fairness.

It’s no surprise that unions want workers to earn more, and this is not the AFL-CIO’s first call for higher wages across the board. The labor federation adopted much the same focus after John Sweeney and Trumka first won the top posts in the AFL-CIO in 1995. (Sweeney authored a book titled America Needs a Raise: Fighting for Economic Security and Social Justice.) But progress has been slow. Despite some victories on minimum wages, living wages (which typically mean a higher minimum for certain workers, such as public contactors), and other measures, workers need a raise now even more than two decades ago.

The AFL-CIO campaign to raise wages centers on supporting legislation that would raise the federal and state minimum wages (including the minimum for tipped workers, frozen at $2.15 since 1991). But it goes further than that, to backing a broad swath of local, state and national proposals that would help workers prosper, including measures to establish living wages, strengthen enforcement against employer wage theft, guarantee paid sick days and bolster basic federal social safety-net programs, such as Social Security, Medicare and the Affordable Care Act. (Unions in many industries are seeking to preserve their non-profit healthcare plans jointly administered with management, which are threatened to be crippled by the ACA's denial of subsidies and incentivization of limiting workers' hours.)

Trumka did not outline any new tactics beyond labor’s standard ones: political education and mobilization to try to make wage and inequality issues central to the election this fall.

But he thinks the conditions are ripe to build public support for a wage boost. “Workers are sick and tired of wages being flat, not growing, and they’re working harder and harder and harder and getting by on less and less,” Trumka said. In this climate, if progressive politicians focus on raising incomes through cash or benefits, they will beat right-wingers, he says. Even the ACA, which has taken the brunt of Republican attacks, has millions of beneficiaries, and those ranks are growing every day. Without a viable alternative, the Right’s attacks on the ACA are likely to backfire, he said.

Trumka also passionately embraced a stronger campaign on immigrant worker rights, an issue on which unions and most immigrant rights organizations have already been working closely. The AFL-CIO has become much sharper in its criticisms of the deportation of immigrants, which has soared under Obama. “I think there is a rationale to stop the deportation,” Trumka said. “The system is broken. Three and one-half minutes of due process is a broken system,” he said, citing the average time for a legal deportation hearing with translation time factored out, drawing on a report by a deportation hearing judge to an AFL-CIO committie.

On an ideological level, he combined emphasis on fighting deportation and encouraging citizenship represents labor’s growing identification with a broader democratic movement. And on a pragmatic level, fighting deportation removes a tool employers often use to threaten migrant workers and depress wages, while naturalization and voter registration of immigrants, who tend to be progressive, increase the odds of electing liberal politicians.

Although prospects for passing any federal immigration bill appear dim, the AFL-CIO will continue to push for it, if for no other reason than to make the Republicans’ political quagmire over immigration deeper and stickier at election time.

The AFL-CIO executive council, which is made up mainly of presidents of affiliated unions, also is working to implement two other convention resolutions: how to make the AFL-CIO’s state federations and local central union bodies more accountable for following federation strategies and for fostering mutual support among unions, and how to expand and strengthen alliances with other progressive groups.

RoseAnn DeMoro, head of National Nurses United and a member of the executive council, applauds Trumka’s efforts to mobilize labor for a larger challenge to corporate power. “Rich wants to change how we’re doing our work completely,” she said. “He wants everyone working collectively. He wants us in low-wage areas. He wants us mobilized in every street. He’s talking about a completely reformed, far more aggressive labor movement. We’re at a crossroads. We either completely transform or continue in the same direction.”