Chicago Students and Parents Say ‘No’ to State Tests 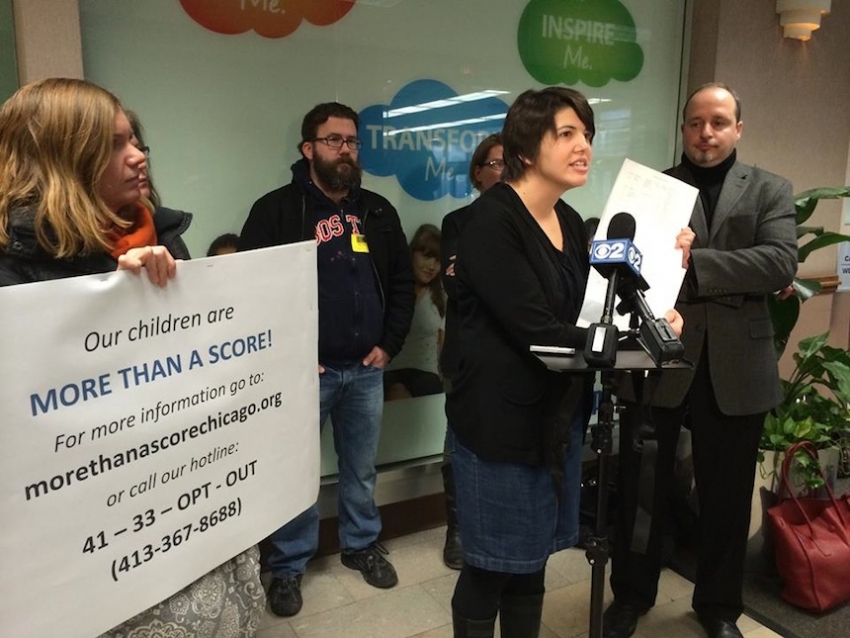 Hundreds of children in Chicago will opt out of the state's standardized testing next week. At a press conference on Monday, parent Cassandra Creswell held up paperwork from the 11 tests given to students in pre-K through the 8th grade. (Via Chicago Teachers Union Facebook page)

For years, it wasn't uncommon for students taking the Illinois Standards Achievement Test (ISAT) to be so stressed about the standardized test that they would leave the room crying. Nervous children have been known to vomit on the exam. Should that happen, according to a Chicago teacher, instructions given to teachers administering the ISAT specify that the exam is to be wiped off, put in a plastic bag and sent off for grading.
But this round of testing has been different. Spurred by years of organizing, and with the support of the Chicago Teachers Union, parents in the nation’s third largest school district are increasingly opting out of the ISAT.
More Than a Score, a group made up of parents, students, teachers, and community members “working to end the misuse of high-stakes standardized testing in Chicago Public Schools,” estimated earlier this week that more than 500 children in 29 schools won’t be sitting for two weeks of ISAT testing next week. At one school, Maria Saucedo Elementary Scholastic Academy on the city’s Southwest Side, teachers unanimously voted Tuesday morning not to administer the test to their 1,260 students after about 65 percent of students had opted out themselves by submitting a form to their school.
“We talked about how really no student should take this test, and as professional educators and teachers who care about their students, we took the vote that we did,” says Sarah Chambers, a special education teacher at Saucedo and co-chair of the Caucus of Rank and File Educators, the CTU’s progressive faction.
The anti-testing movement has grown in tandem with the explosion of high-stakes standardized testing in recent years. But the most recent battles are tied up with the Obama administration’s move towards Common Core, an education initiative to introduce new teaching curriculum and materials for K-12 classes, which comes with new testing.
The program has been adopted in 45 states and Washington, D.C., but pockets of resistance to Common Core are widespread. Several states are entertaining 11th-hour measures to halt or delay the education program, including Maryland, Tennessee and Florida. California, with more public school students than any other state, has said it can’t administer tests this year because the exams associated with Common Core aren’t yet ready. In Maryland, House Republicans are pushing a bill to withdraw from Common Core altogether.
During the upcoming round of testing, coming in the middle of the transition to Common Core, neither the old tests like ISAT nor the new Common Core tests will be used to determine such things as selective enrollments for schools, school ratings, grade advancement and evaluations of teachers and principals. The lack of stakes is fueling the movement for an ISAT boycott in Chicago.
However, Chicago Public Schools are still pushing for students to take the test because, if less than 95 percent of the district takes the ISAT, CPS may fall out of compliance with federal No Child Left Behind laws which decide how federal funding is allocated.
Responses from CPS administrators to the opt-out have been erratic. The principal of Franklin Fine Arts Center wrote in a letter to parents leaked to community groups that opting-out of the ISAT will “seriously jeopardize our school and staff and status,” and “opting out of this test is not an option.” The next day, parents received another letter from the principal: “I want to clarify an important point: you may opt out of the ISAT and any test. I apologize that I did not give you accurate information on this point in my letter yesterday.” Activists say the initial letter shows pressure from above to get students to complete the test.
CPS Chief Executive Officer Barbara Byrd-Bennett also sent out a letter to teachers, warning: “Parents should be informed that there will be no alternate instruction given during the assessment and that children who are not being assessed will be required to engage in a silent, self-guided activity while their peers are being tested.”
But Chambers says teachers at Saucedo won’t be following that directive. “Instead of giving the tests, we are going to be teaching our students as we normally do,” she said. “Standardized tests do not give useful data on what the students actually know. We as teachers are the experts, and we’d rather be teaching them.”
Opponents of using standardized test scores to judge school and teacher performance have long said the hammer falls hardest on schools serving low-income students
In Chicago, 47 schools, primarily in low-income neighborhoods, closed last year on the basis of being “underperforming,” a designation based on test scores from exams such as the ISAT. In November 2013, the CTU launched a campaign against standardized testing called “Let us Teach!,” which aims to put student assessment back in the hands of teachers.
For the next school year, teachers in Illinois will have to administer the Partnership for Assessment of Readiness for College and Careers, which will compare students alongside their statewide cohort. As testing continues, Chambers says the fight against it will as well.
“This is just the first step of an overall movement against over-testing, against the standardization of education,” she said. “These scores are used against us, to close our schools, privatize our schools, and we’ve had enough.”