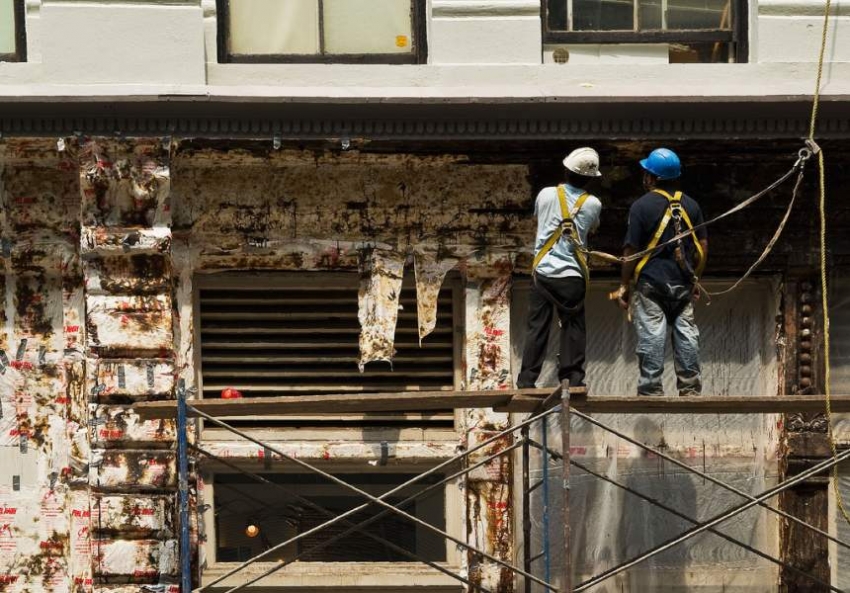 Construction workers inspect the side of a building from a scaffold, wearing safety harnesses.   (Dan DeLuca / Flickr / Creative Commons).

New York City’s tens of thousands of construction workers face a precarious landscape at work.  Teetering at the edge of rooftops, sidestepping mammoth cranes and noisy bulldozers, and navigating through half-collapsed walls and chemical-laden debris, they’re surrounded by hazards day in and day out. Yet many workers remain silent about unsafe conditions. For them, the risk of retaliation outweighs the risk to life and limb.

Given these hazards, one might assume that demanding employers take responsibility for worker safety is about as basic a precautionary measure as a hard hat. Yet, construction industry lobbyists are working hard to gut the Scaffold Law, a keystone piece of occupational safety legislation that has for more than a century added an extra layer of accountability for firms that fail to protect workers from harm. Complaining that the law cuts into their bottom line, opponents have in recent months pushed for reform legislation in Albany that could prove disastrous for the workers most at risk: non-union Asian and Latino workers doing small-scale and informal building jobs already off the regulatory radar of the federal Occupational Safety and Health Administration (OSHA).

The Scaffold Law, a state law on the books since 1885, states that worksites above the ground “shall be constructed, placed and operated as to give proper protection to a person so employed.” The law holds owners and contractors liable for injuries that result as a violation of those standards, and allows employees to sue for damages if they can demonstrate that such a violation occurred and caused the injury in question. Advocates say that the law thereby promotes safety standards such as provision of appropriate training and protective equipment, as well as checks to ensure that worksites are structurally sound.

Opponents say New York’s law is a frivolous measure unique to a notoriously litigious city. But in reality, lawmakers passed the Scaffold Law in response to alarming reports of injuries and deaths caused by unsafe conditions at building sites, including faulty scaffolds. And in fact, other states have passed similar safety laws over the years.

Illinois’ occupational safety record worsened after the state repealed the law in 1995. According to one analysis by a trial lawyers' group, “In 2004, the incidence rate of falls from scaffolding/staging in the construction industry in Illinois was more than triple the national rate.”

The firms and business groups, including the Associated Builders and Contractors, American Insurance Association and, in a nod to diversity, Association of Minority Enterprises NY, mobilizing against the law blame it for excessive litigation and insurance costs, saying that it puts undue emphasis on the employer rather than the “personal responsibility” of the worker. They say the law should be rewritten to allow for consideration of “comparative negligence,” to take into account workers’ alleged carelessness. Proposed changes to the law would explicitly direct juries to consider the degree to which the worker caused the accident. The idea is to create more legal wriggle room to limit the company's legal and financial liability toward victims.

Critics point out that under the current law, the courts are already tasked with adjudicating these factors in civil suits when determining whether the employer is legally at fault for a safety failure, since the law addresses only proven violations of safety codes. But more importantly, critics argue that the concept of “comparative” responsibility is absurd in light of the outsized power imbalance between construction workers and bosses.

Of course, the Scaffold Law provides just a thin layer of protection against an endemically oppressive labor market.

But the Center for Popular Democracy (CPD), a New York City-based advocacy group, argues that the Scaffold Law helps “protect workers from dangers at work that lead to disparate outcomes based on race, ethnicity, or language.”

Occupational hazards, as well as labor abuse, are rife across the construction industry, particularly for more casual, unregulated work, such as the day laborer jobs that proliferated in the aftermath of Superstorm Sandy and the small-scale contractor projects on private suburban homes. Falls from heights made up over one-third of construction worker deaths in 2012, and construction workers suffer injuries that are more frequent and severe than workers in many other private-sector industries, according to data from the Bureau of Labor Statistics. According to an analysis by CPD, in New York City between 2003 and 2011, a stunning 74 percent of fatal construction-site falls investigated by OSHA involved Latino or immigrant workers, exceeding their representation in the general population and the construction workforce. Most occurred on smaller, non-union worksites, where undocumented labor is typically concentrated.

Other research from advocacy groups and occupational-safety authorities suggests Latino immigrant workers are deterred from speaking out about unsafe conditions, in part due to limited English ability or fear of exposing their immigration status. That compounds the oppression of economic precarity and discrimination; it’s hard to feel empowered to challenge your working conditions when you’re “off the books.”

CPD’s analysis highlights the perilous tightrope these workers traverse each day. In one case narrative in the report, two men were working at a height of 16 feet, and “They were moving and adjusting the scaffold when employee #1 fell. Employee #1 was not tied off to his lifeline. Employee #1 was pronounced dead at the hospital.”

Those who survive such workplace accidents may never fully heal. In an interview with WNYC last year, Pedro Corchado recalled an accident while working on a ladder in the Bronx in 2008. “The ladder collapsed on me,” he said. “I fell about 11 feet or so to the concrete floor. I suffered neck and lower back injuries that will be with me the rest of my life.”

Under the proposed reform, these workers might come under scrutiny for being “negligent”—Why did he get on a shaky ladder in the first place? Why wasn’t his lifeline securely tied? Advocates counter that question’s about the employer’s negligence—Who was charged with overseeing the worksite? Did inadequate equipment or poor management place workers in harm’s way?— ultimately hold more weight.

“The fact of the matter is, you could be doing everything right,” CPD Director of Strategic Research Connie Razza tells Working in These Times. “If you don't have the right equipment, you're not going to be able to keep yourself safe in every circumstance that comes up. And it is the owners' and the contractors' responsibility to make as safe a workplace as possible, but certainly as safe a workplace as legally required."

As for the business case against the law's cost, it is true that some of this uniquely litigious city’s largest civil settlements in recent years came from suits involving construction-related scaffold and ladder injuries.

But this is offset by the permissiveness of the federal regulatory environment. According to the AFL-CIO, the average penalty assessed for a “serious” violation of an OSHA standard, such as failing to provide appropriate mechanical safeguards or protective gear—in New York in 2012 was $2,164. (Criminal prosecutions are virtually unheard of, and the agency's inspection and enforcement capacity is severely hampered by chronic understaffing).

While the contractors at the top of the construction industry complain of lawsuits and insurance costs, Razza says the suggested reforms “would shift responsibility away from owners and contractors who control the work site, to workers who don't, and who are often really in a relationship where they feel threatened if they come forward with complaints ... The construction and insurance industries are trying to push back and save money, and the reason that the law is so important is that it saves lives."