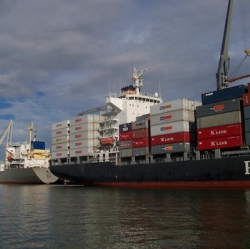 For Colombia's union leaders, the epidemic of violence and poverty in the port of Buenaventura can be traced to the region's labor crises.   (Jimysantandef / Wikimedia / Creative Commons)

The Pacific port city of Buenaventura is the gateway to the Colombian economy. The city handles around two-thirds of the country’s maritime foreign trade and connects Colombia to 300 ports around the world. But despite its status as a thriving hub of international trade, Buenaventura is better known as an epicenter of narco-paramilitary activity, making it one of Colombia’s many sites of rampant poverty and violence, death and hopelessness.

Buenaventura is currently undergoing a multi-layered humanitarian crisis. Unemployment stands at around 64 percent, and over 60 percent of the city’s population lives below the poverty line. Many of its residents lack even the most basic services, including potable water, reliable electricity and functioning sewage systems.

The city is situated on the frontlines of a narco-paramilitary war for Pacific coast drug trafficking routes, which has earned it a macabre reputation for torture houses, dismembered bodies and mass graves. Both sides in the war feed off the city’s poverties, using desperate youths as disposable soldiers.

Javier Marrugo, the president of Unión Portuaria de Colombia, the port workers union, believes that while the city’s problems are many and complex, they can be traced back to one abusive labor practice at the city’s main employer: the port.

“The origin of Buenaventura’s social crisis is labor outsourcing,” Marrugo said. “That is the root of the problem—the other problems such as insecurity, crime and drug trafficking would not be hitting the city as hard as they are at the moment if there were decent, dignified work.”

The practice of subcontracting port workers through third-party labor agencies began after the Buenaventura port was sold off to private interests within the country in 1994.

“When the port was not private it wasn’t like this in any way,” said Marrugo. “Such critical socioeconomic conditions did not exist.”

Only a handful of workers are now employed directly in the port, while the rest must seek precarious, insecure work through individual contractors, temporary agencies and the notoriously abusive subcontracting companies known in Colombia as Associative Labor Cooperatives (CTAs). In addition, an estimated 1,000 workers exist purely on informal labor, according to Marrugo, reduced to trudging around the port and beyond to the city’s free trade zone, looking for work at about $10 a day.

Since the move to subcontracting, port workers have seen a collapse in wages, a deterioration of working conditions and the blunting of the labor movement.

For the majority of workers, pay rarely rises above the minimum wage of around $330 dollars a month. Collective bargaining has been hobbled by the subcontracting system, because with no job stability, workers must choose between accepting whatever pay and conditions are on the table or succumbing to joblessness.

Those who attempt to organize or unionize have been threatened and fired, while the unions report receiving phoned death threats by men claiming to belong to paramilitary organizations.

The system has also forced workers into silence over long hours and poor—sometimes dangerous—working conditions. Some workers report laboring on the docks almost nonstop for 24 to 36 hours but receiving the standard eight-hour-day rate.

The most basic safety equipment is not commonly provided. Between 1994 and 2008, 31 dock workers died because of inadequate safety standards. Not a single person has been charged as a result.

Many more have been injured on the job, but due to the sub-contracting system, they often find they have no healthcare coverage. In some cases, workers report having been assured they had coverage after years—even decades—of contracting , only discover they had been lied to by the sub-contractors who had hired them after they arrive at a medical clinic.

Older subcontracted workers—often discarded for younger, stronger replacements—reach the end of their working lives to find they have virtually no safety net. Even after 15 years on the docks, workers only receive the equivalent of 50 weeks of pension benefits. As a result, an estimated 1,500 retired workers have reached retirement to find they have no means to support themselves, and some have been reduced to begging on the streets.

The third-party labor contracting in Colombia is not a problem limited to Buenaventura, nor even to the country’s port sector. In fact, it was one of the principal targets of the U.S. Labor Action Plan (LAP).

The LAP is a labor rights agreement that was devised to ease the passage of the Free Trade Agreement (FTA) between the countries, which had stalled as a result of concerns over labor abuses in Colombia. It has now been in place for three years, while the FTA itself was passed in October 2011 and implemented in May 2012. Unions, human rights groups and U.S. congressional monitors of the LAP’s implementation have consistently criticized the process for handing over the U.S.’s leverage to improve labor rights in favor of moving forward with the FTA before Colombian authorities took concrete actions to improve the labor situation.

The practices employed by the port companies are illegal under Colombian law. And the LAP, which singled out the port sector as one of the worst violators, commits the Colombian government to ensuring it enforces those laws. The government has now opened up hundreds of investigations into labor abuses in the Buenaventura ports and as a result of some of the investigations—the majority have yet to yield results—has sanctioned the private Port Authority for violations.

Still, little has changed on the ground as a result of these actions.

“I believe the [LAP] has laid out very good parameters and the government has been very serious about setting out rules for complying with the plan,” said Marrugo. “What it has not done is made companies comply with these rules.”

With the port companies owned by wealthy Colombians interests outside of the Buenaventura region, and the goods that pass through the port traded by outsiders, tax revenues and employment are all Colombia’s busiest port has to offer the city that houses it.

Yet because of the subcontracting system, the port does not offer workers a dignified living—only exploitation. Many of the city’s thousands of poor, largely uneducated and disenfranchised youths subscribe to the belief that just one other employment option remains. It’s a job that pays twice as much and offers a warped sense of self-worth and respect: joining up with the narco-paramilitaries to kill, maim, and sew terror and violence in Buenaventura.

James Bargent is a freelance journalist based in Medellin. He has reported on Colombia and Latin America for the Miami Herald, the Toronto Star, Sky News, InSight Crime, the Times Education Supplement, Colombia Reports, AlterNet, Toward Freedom, Upside Down World and Green Left Weekly.