The Paycheck Fairness Act Would Have Helped All Workers, Not Just Women 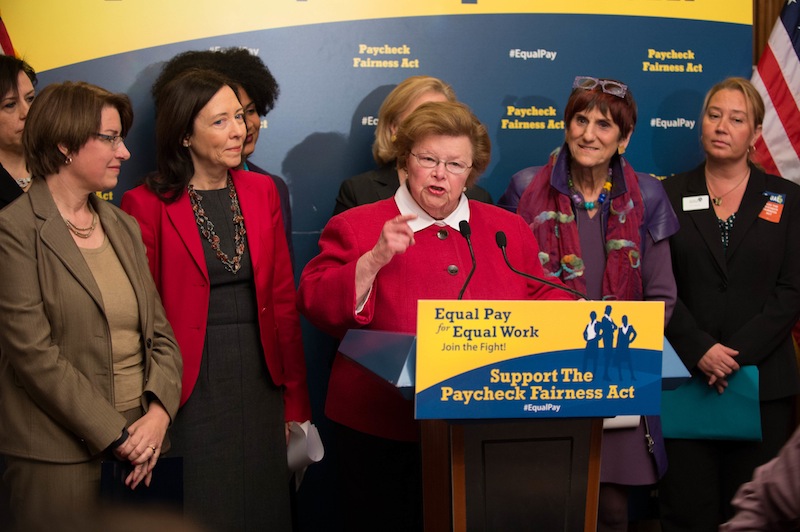 Senator Barbara Mikulski (D-Md.) calls on the Senate to pass the Paycheck Fairness Act at an April 1 press conference. If enacted, the law would have protected all workers from being fired for discussing wages with each other. (Senate Democrats / Flickr / Creative Commons)

Despite being a part of the U.S. workforce for decades, American women are still earning 77 cents for every dollar their male counterparts make. In an effort to close that persistent gap, Democrats in Congress have tried three times since 2009 to pass the Paycheck Fairness Act. And all three times—most recently on Wednesday morning—Republicans in Congress have blocked the bill from proceeding to debate and a full vote.

Though the act was framed as a way to fight the enduring discrepancy in wages among genders, in reality, it would have helped work toward better conditions for all workers. On Tuesday, President Obama signed executive orders that acted as a parallel Paycheck Fairness Act for federal contractors and publicly urged Congress to pass the bill.

Predictably, Republicans responded by calling the act a job-killer and a non-starter in the current economy. If passed, the bill would have made several amendments to the Fair Labor Standards Act of 1938 (FLSA) and the Civil Rights Act of 1964. Specifically, it would have mandated that factors used to justify wage differences were not based on gender divisions and were consistent with business necessity; it would have required the Equal Employment Opportunity Commission (EEOC) to collect data from employers regarding the sex, race, and national origin of employees, thus discouraging discriminatory compensation decisions; and it would have prohibited employer retaliation against employees who disclose their wages to each other.

This last provision was meant to shine a light on workers’ pay so that it would be more difficult for employers to secretly pay women—or anyone—less than equally qualified colleagues. Though it was a central part of the legislation that Republicans vilified as economically problematic, it actually broke no new legal grounds.

In effect, the provision is meant to deal with a problem similar to the one made apparent in Lilly Ledbetter’s case against Goodyear that went before the Supreme Court in 2007. When Ledbetter was first hired by Goodyear, she was paid the same as her male counterparts. Over time, however, her pay failed to increase at the same rate as her male coworkers'; as she approached retirement, she found that she was earning far less than the lowest paid man in her position. Presumably, had she discussed her wages with coworkers earlier, she would have known and acted upon the pay discrepancy sooner—perhaps even circumventing the Supreme Court’s rationale for denying her case, which was that she had failed to file suit 180 days from her first paycheck.

Prohibiting employer retaliation against workers for discussing their wages is an important protection, and it’s one that is already enshrined in federal law. Under the National Labor Relations Act (NLRA), it is a violation to retaliate against employees for discussing their wages. The core section of the NLRA, Section 7, states that “employees shall have the right … to engage in other concerted activity for the purpose of collective bargaining or other mutual aid or protection.” And there is perhaps no more basic form of concerted activity than discussing one’s wages and terms of employment.

The problem is that employees’ labor rights, as articulated in the NLRA, have notoriously weak penalties. Labor and employment attorney Vincent Mersich explains to In These Times that an employee who is retaliated against by being demoted, suspended, or anything short of fired for discussing her wages can anticipate little response under the NLRA. The employee must first hope that the Labor Board takes her case; if they do and the employee is successful before a judge, he says, “the best [the employee] could hope for is a notice and posting requirement.” If an employee is fired, for that matter, the strongest remedy she can expect from the Labor Board is lost wages.

Under the Paycheck Fairness Act, an employee would not have to rely on having the Labor Board take her case. Instead, she would be able to go straight to federal court and seek real remedies, including compensatory and punitive damages.

This prospect scares Republicans. As much as they complain about the Labor Board and its “pro-union bias,” they much prefer its regulatory structure to one where workers could take their cases directly to court, have their cases heard before a jury of their peers, and be awarded damages that actually compensate workers for their losses, while punishing and deterring employers. Right now, Republicans can rein in and control the Labor Board by blocking nominees—thereby denying the Board a quorum—or halting funding; although the Senate does have to approve federal judge appointments, the same level of interference is not possible in the court system. Conservatives complain about the Labor Board, but they fear the courts.

The right to discuss one’s wages is theoretically already a federally protected one under the nation’s labor laws, but the weakness of the Labor Board makes it essentially a right without a remedy. The approach taken by the Senate with the Paycheck Fairness Act of trying to shift various labor rights to other more effective statutes is likely the best way to save labor law and protect workers. Though the act failed by six votes to get a filibuster-proof majority on Wednesday, Democrats should certainly keep trying.