One Year After Closings, How Are Chicago’s Public Schools Now? 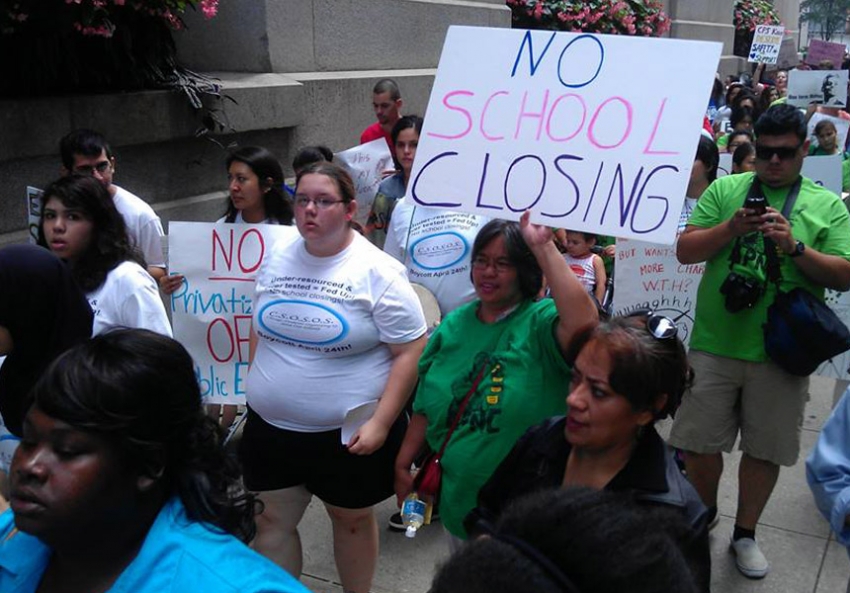 In the fall of 2012, the fear of school closings was one of the main catalysts for the historic Chicago Teachers Union strike, which saw tens of thousands of teachers walk off the job.

The Chicago Public Schools district had already closed 86 schools in the previous decade on the basis of low test scores and, more recently, arguments that the buildings were underutilized. At the time of the strike, rumors were circulating that up to 120 more schools were on the chopping block.

Despite this blow, the city vowed that students and teachers would not feel an impact from what amounted to the largest school closure in history. In fact, they argued, closing the schools would more evenly distribute resources that teachers often complained were sorely lacking.

It’s been one year since then. Now, a new report by the CTU finds that few of those promises were kept, particularly around staffing receiving schools and additional allocation of resources. The report, called “Twelve Months Later: The Impact of School Closings in Chicago” includes interviews with teachers from seven receiving schools as well as well as research into vacancy reports, class size data and operating and capital budget documents.

The district allocated more than $8 million in operating funds to the receiving schools, where students from closing buildings moved, and $155 in capital investments. All of the capital investments and half of the operating funds would come from money redirected from the closed schools, while the additional money would come from the expected savings having more students in fewer schools, said the district in March 2013.

But, the report says, “additional funding to change the chronic under-resourcing that students from closed schools in particular have experienced never materialized.” Instead, the money went toward logistics, moving expenses and the creation of ”Safe Passage” routes for students whose new walk to school placed them in danger.

Furthermore, the costs of the closing moving expenses have overrun their projected budget, coming to $10 million more than the $8.9 million originally projected, WBEZ found. The reason: the shuttered buildings had three times more stuff inside them than the district initially realized.

Among the concerns highlighted by CTU during the strike was the district’s lack of libraries—nearly 1 in 4 schools did not have stand-alone libraries—as well as the gap in available learning technology between better-resourced schools and those on the primarily low-income South and West side.

In its rationale for the school closings, CPS promised a library to every student, as well as iPads for all students in grades 3 through 8. This would help bolster “enhanced learning environments,” the district said in a press release.

And though the district did provide all students with libraries and invest in technology—giving all students at receiving schools in grades 3 through 8 iPads and upgrading computer labs at receiving schools—the CTU argues that without trained staff, these new improvements don’t do enough on their own to improve the learning environment. Only 38 percent of receiving schools had a librarian on staff, compared to 55 percent of elementary schools across the district. Similarly, the CTU says that only one-fifth of schools had technology teachers.

In a statement, CPS attributed this dearth of technology teachers and librarians to hiring decisions made by individual principals.

Leading up to the transition, CPS claimed that “all students with disabilities, students in temporary living situations, and English Language Learners will continue to receive required services to support their learning.”

However, the report argues, the slower-than-average hiring of social workers and nurses at receiving schools meant that many students in need were left without resources. The proportion of special ed students to social workers is higher at receiving schools now than it was before the consolidation, for example. Special education teachers were also hired at a slower rate than the average around the district, the report says: “The average duration of a special education teacher vacancy was 22 weeks at receiving schools, compared to 14 weeks at other elementary schools.”

In 56 percent of receiving schools, there was a vacancy for a special ed teacher—possibly making special education classes more crowded or forcing teachers to work without the support of a colleague—over the first three quarters of the year.

“With the large increases in enrollment at receiving schools, CPS should have concentrated their efforts in making sure all positions at these schools were filled quickly,” the report notes. “No positions, especially those addressing special education needs, should go unfilled for weeks.”

An assessment by the education magazine Catalyst Chicago found few complaints about the receiving schools from the parents of special education students in the first months of the year. The article does note, though, that this could simply be attributed to a lag between when a child in special education classes starts instruction and when parents begin to notice a problem, and from there how long it takes to reach advocates like those interviewed in the story.

At the heart of the issue, argues the CTU report, is that consolidating and closing schools didn’t minimize a devastating resource gap faced by the roughly 12,000 students who were affected.

In a statement, the district contested the idea of a resource gap, noting that they provide the same amount of core instruction funding for every student, and that receiving schools would have gotten an extra boost this year.

However, it’s well known that the better-resourced CPS schools bring in tens of thousands in additional funding from parent fundraising for extra positions and extra-curricular activities.

For the low-income communities that lost a neighborhood school, the effects are still palpable one year later. Two of Rousemary Vega’s four children attended the now-closed Lafayette Elementary School. Vega calls the decision to shut the school “devastating.”

“It was like receiving news that a family member has passed,” she says. Vega herself graduated from Lafayette, as did her father. “Removing Lafayette displaces our communities. It’s like yanking someone from their roots [and] erasing their memories.”

Her 8-year-old son has had trouble adjusting to his new school, Vega says, and his grades have dropped. Her 12-year-old daughter is doing better, but said she still misses Lafayette’s string orchestra program—prior to the closings, the only CPS children’s string orchestra in Chicago.

“How do I tell my kids that there is no money for you[r school], but there is money for another school?” she said.