What the Supreme Court’s Noel Canning Decision Means for Labor 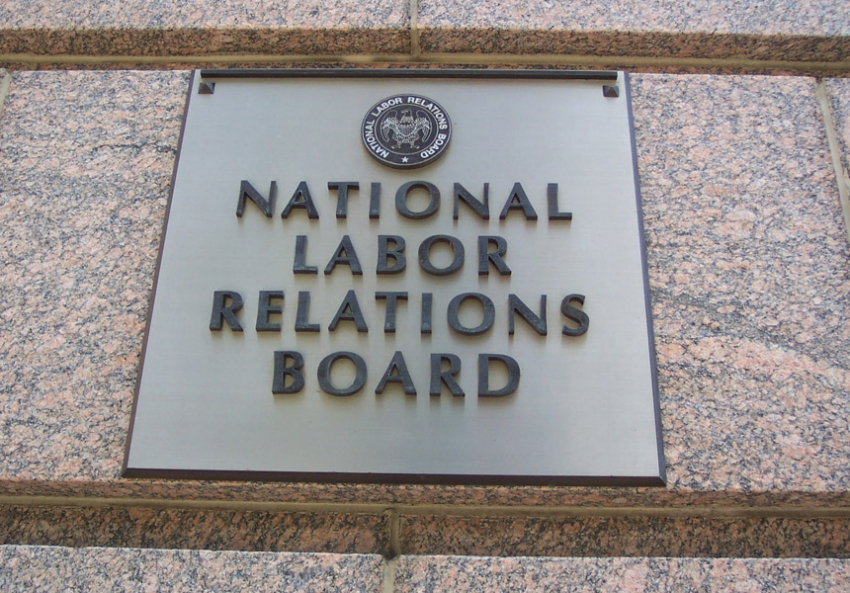 Though the Supreme Court decided that Obama's 2012 recess appointments to the NLRB exceeded his authority, they have since been approved through the standard process—meaning the Board can continue its work. (Wikimedia Commons)

On Thursday, the Supreme Court unanimously agreed that President Obama overstepped the limits of his power in January 2012 when he appointed three members to the National Labor Relations Board during a Senate recess.

As part of their strategy to stymie all administrative initiatives, Senate Republicans had previously blocked consideration of Obama’s nominations, leaving the formally five-member NLRB—the principal enforcer of federal labor laws—without the majority it needed to function. Obama responded by appointing three new board members during the holiday recess, circumventing the Republican minority’s hindrance of the Senate approval process and the president’s appointment powers.

After losing a case before the NLRB in 2012, Noel Canning, a Pepsi-Cola bottler in Washington state, challenged the validity of the recess appointments; in January 2013, the U.S. Court of Appeals for the D.C. Circuit determined those appointments were indeed illegal. At the time, union leaders were outraged that the appellate court’s decision had effectively granted a Republican minority in the Senate the power to shut down the principal government agency protecting workers’ rights to organize. The Obama administration appealed the decision to the Supreme Court; in the meantime, the NLRB continued to operate.

When the Supreme Court decided on Thursday that Obama’s 2012 actions had exceeded his authority, AFL-CIO president Richard Trumka responded with an even-tempered observation: Republican obstructionism had forced the president to act, and now the country’s highest court had simply “cleared up the legal landscape on a question both Democratic and Republican presidents have faced for decades.” Most importantly for labor in the short run, the current NLRB members were approved last year through the standard appointment process—meaning the board can continue its work unimpeded for now.

The five-justice moderate majority, led by Justice Stephen Breyer, reaffirmed the longstanding power of the president to make appointments during a recess without Senate approval. However, they clarified that recesses had to be at least 10 days long for him to do so—and the party in control could design the recess as a series of short breaks punctuated by “pro forma” sessions, as Republicans did in 2012 to try to hinder the nominations. The justices also decided that a recess could be between the two sessions of each Congress chamber or within a session.

The four justices on the Right, whose dissenting opinion was written by Justice Antonin Scalia, would have much more greatly restricted presidential recess appointments. In general, Republicans have portrayed Obama as an extreme abuser of presidential power and privilege, even though he has made far fewer recess appointments than any of his four immediate predecessors. For example, Ronald Reagan made 232 such appointments in his presidency; so far, Obama has made just 32.

Although the Supreme Court’s decision tilts slightly toward the executive branch, which could now be considered moderately pro-labor, the battle for political power looms as large as ever on the organizing landscape. Democrats finally changed Senate rules in November 2013 to prevent minority filibusters from blocking executive branch appointments. As a result, Obama should not need to use recess appointments at all to get around minority Republican intransigence. But Thursday's decision still gives a determined opposition party power to limit recess lengths if it controls the House or Senate. Given that each chamber is involved in setting the recess of the other, this could cause complications for Obama should Republicans take the reins in either of them.

For that matter, if the Republicans win the Senate this fall, they could reject all of Obama’s appointments outright. And although all five members of the NLRB will remain in office, having been approved through standard, non-recess procedures, the term of former union lawyer Nancy Schiffer ends in December—barely giving Obama and Senate Democrats time to approve a successor if such a scenario arises.

And though the decision temporarily works in favor of the labor movement, the fallout from the legal battle could disrupt and slow the work of the NLRB. Employers have challenged roughly 100 NLRB decisions made by the board members who had been appointed during the 2012 recess. If most of those employers continue to contest those cases rather than settle, the current NLRB will have to revisit them.

Given the NLRB’s track record, this could take quite some time: After a federal court ruled in 2010 that the Board had to have a three-person majority vote to decide cases, it took nearly three years for it to review about 100 disputed decisions, according to NLRB spokesperson Gregory King. That experience suggests that the NLRB could be tied up for many of the coming months revisiting cases from January 2012 to August 2013, which would interfere with its pressing new work.

In the end, it seems neither side in the legal battle had much to celebrate. Even as the White House criticized the decision, Forbes headlined its story, “Obama Loses on NLRB Recess Appointments, But Employers Unlikely to Win.” The Democratic majority now in place on the NLRB is indeed likely to rule much the same way as the one made through recess appointments—so a "loss" for employers will be a victory for many workers.

But many unions note that the decision does not resolve serious issues about democratic practice in Congress, particularly the Senate rules on debate and filibuster. As the Communications Workers of America stated in reaction to Thursday's decision, “The Senate’s constitutional duty is to review the president’s nominees through ‘advice and consent’—not use parliamentary tricks to impede his policy agenda,” as the Republicans had done with the fight over recess appointments.

It is fitting that this legal fight over democracy and the appointments process revolved around an agency devoted to workers’ rights, given that the deepest challenge to democracy comes from the ways in which a plutocratic minority can manipulate the political system in ways that maintain its power at the expense of a working-class and middle-class majority. However, the Supreme Court, whatever its actions on recess appointments, is unlikely to be the venue where that more profound question is answered.

Full disclosure: The CWA is a website sponsor of In These Times. Sponsors have no role in editorial content.