Oaxaca Teachers Fight To Protect Students and Community From Reforms 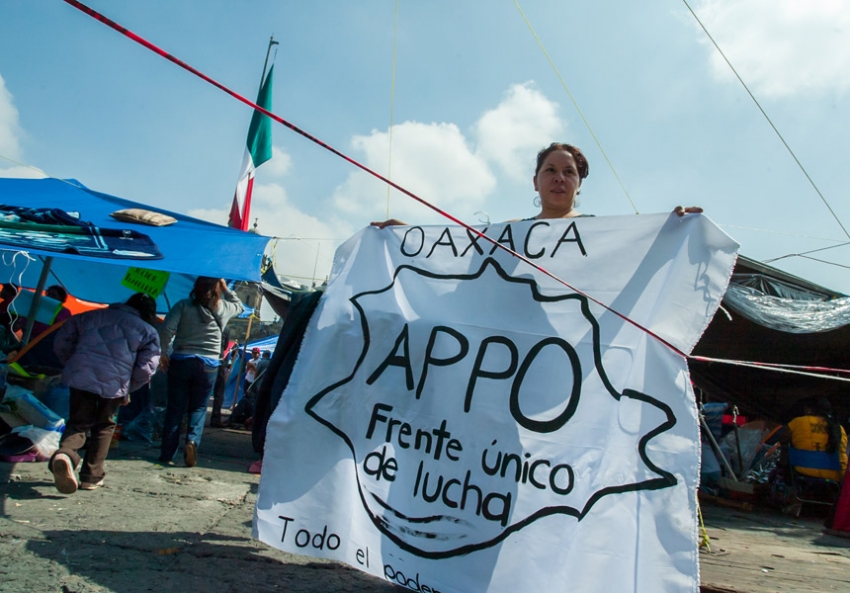 On the morning of July 31, the Oaxaca offices of Mexico’s ruling party, the Institutionalized Party of the Revolution (PRI), were in chaos. Activists from Oaxaca’s Section 22 of the Mexican Teachers Union stormed the premises, throwing computers and filing cabinets from the second floor to the ground as the public looked on. The teachers then set up camp in Oaxaca’s main square, Zocalo, an occupation that has since lasted for weeks.

The action was the latest maneuver from Mexican teachers against the neoliberal education reforms implemented by President Enrique Peña Nieto over the last year. Beginning in early 2013, Peña Nieto began passing sweeping policies that—among other changes—reasserted government control over education, tied instructor pay to student evaluation results, and restricted the bargaining rights of teachers throughout Mexico.

On May 1, in recognition of International Workers' Day, Section 22 teachers led other dissident teachers unions of Mexico on a four-month occupation of the central square of Mexico City. Police evicted the teachers in August 2013; they then moved to the Monument of the Revolution, where a camp still remains. After Congress passed Peña Nieto’s laws just a month later, Oaxaca teachers revolted again—and they’ve kept up the pressure ever since. The attack on PRI's offices is just another incident in the long line of unrest that has come with the party’s 2012 return to power.

Much of this discontent is rooted in Oaxaca’s political and social climate. As the most diverse state in Mexico with a high indigenous population, many Oaxaca’s students speak different dialects or come from rural backgrounds. Because of this, teachers say, the policy changes from the Peña Nieto administration are unrealistic and oppressive.

The reforms, says Luis Stalin, General Coordinator of Section 22’s research department, the Center for the Study and Development of Education (CEDES 22), “do not include the people in the villages and communities.”

He points out that one major new policy relies on wedding instructor compensation to student scores on Spanish-language tests, which the teachers do not have the option of offering in indigenous languages. This proves, he says, that the Mexican government “does not take into account the original peoples of Mexico who do not speak Spanish.”

Other aspects of the reforms, advocates say, such as three-strikes-and-you’re-out evaluation rules and discipline for instructors who miss days of work, are also likely to negatively impact Oaxacan students, teachers and communities. All in all, advocates say, the policies continue Mexico’s legacy of colonialism by imposing the will of the centralized state on its entire population.

Over the last decade, the teachers of Section 22 have been fighting to construct the best education methods for their students and for Oaxacans. As early as 2004, those involved with CEDES 22 had begun to discuss what a community-based, autonomous education would look like for the state, going so far as to outline a general scheme in 2012. But the September 2013 reform passages were a catalyst: It was then, the teachers realized, that action had to be taken quickly.

“It was an emergency,” said Stalin. “We had to develop a plan in resistance to the government’s plan.”

Section 22 spent the next three months developing an action-oriented challenge to the federal government’s objective: The Plan for the Transformation of the Education of Oaxaca, which was released in November 2013.

“The government's reforms only work for the cities” such as Mexico City, says Cecilia Araceli Cruz Nicolas, a regional coordinator for CEDES 22. “We cannot give the same education for everyone [in Oaxaca], since it is not the same conditions of life.”

As the New York Times pointed out last year, “Oaxaca ranks second-to-last among all states in infrastructure … Being a teacher in Oaxaca means sometimes having to travel for an entire day to reach your school in a tiny community.”

To combat this disconnect, Cruz Nicolas says, “We have created a better education system; one that works for the communities.”

Section 22’s plan is inspired by the Brazilian educational pioneer Paulo Freire, who argued in the 1968 text Pedagogy of the Oppressed for the creation of a participatory, community-based education system that empowers and inspires critical thought. In that vein, the teachers of Oaxaca have envisioned a method that puts the control of education into the communities’ hands, develops a critical understanding of society, and—unlike the government’s plan—reflects their diverse state.

According to Cruz Nicolas, the plan aims to “create a new form of learning that allows the students to transform their communities and their futures.”

Within the proposal, instructors will solicit input from Oaxacan communities as to the best way to impart material onto their students, as well as engaging parents and neighbors in the learning process. They also hope to improve student and teacher access to medical care and food through the hiring of nurses and nutritionists within all schools in Oaxaca. And at a time when the collective bargaining of Mexico’s teachers is under attack, the plan acknowledges the central place of teachers in the education process, and preserves their right as workers to collectively bargain.

The teachers of Oaxaca view education as having a revolutionary and emancipating potential. However, they believe that in order to unleash that potential and make change, education must be participatory, collaborative, and a nonhierarchical process.

“Generalized, individualized vision that tears the social fabric and violates human dignity, without the consideration of diverse cultures, climates, and geographies of the country,” the proposal’s authors, who are not publicly named, write. “Education ought to be a cultural discourse, and a language of possibilities.”

Of the 32 states of Mexico, Oaxaca is the only one that has yet to ratify Peña Nieto’s education reforms, thanks to Section 22’s continued protests and a sympathetic state government. In the past few months, teachers have worked alongside the government to develop a state law that would both fund their autonomous education system and protect it from being affected by federal reforms. Delegates from Section 22 delivered a draft of that State Education Law (LEE) to Governor Gabino Cué Monteagudo on August 10. The law is currently working its way through the State Assembly, and representatives from Section 22 are optimistic that it will pass.

The teachers’ education plan is yet another step in Section 22’s struggle to democratize the education system both within its state and the nation. It follows in the legacy of the Oaxacan uprising in 2006, when a teacher’s strike against the policies of Oaxacan Governor Ulises Ruiz Ortiz evolved into a social upheaval that led to Juarez, a major Oaxacan city, being occupied by federal troops. And teachers fear that even if they are able to successfully pass LEE and implement their autonomous plan, the federal government will somehow manage to overrule them yet again to impose its reforms.

For the activists and teachers of Section 22, though, the threats that are created by the policies go far beyond just education; to them, the structural reforms of Peña Nieto imperil the entire country. In advocates' view, the policies oppress the already colonized communities of Oaxaca and further intensify the inequality gripping the nation.

“The reforms affect everyone in Mexico,” says an activist and affiliate of Section 22 from Mexico’s other teachers' union, National Coordinator of Education Workers (CNTE), who asked to remain anonymous. “They are tearing the social fabric.”