The Latest Attack on Labor, From The Group That Brought Us ‘Harris v. Quinn’ 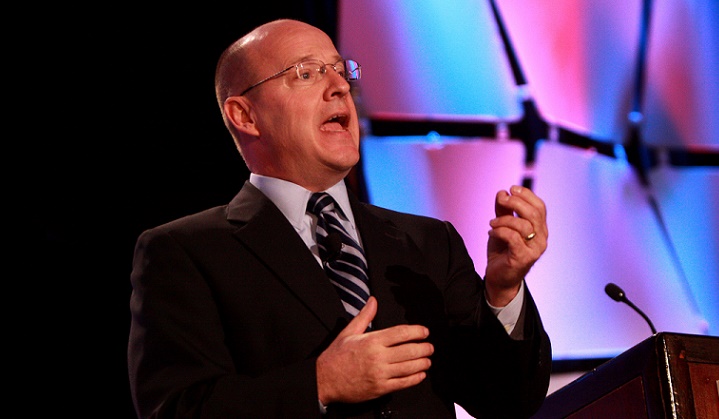 On the heels of its recent Supreme Court victory in Harris v. Quinn, the National Right to Work Committee and Legal Defense Foundation (NRTW) has initiated a bold new attack on unions.

In a recent fundraising appeal sent on August 10, the president of both organizations wrote that Harris “was just the beginning,” and that fair share provisions (or, as he called them, “forced dues”) were only “part of the problem.” Now, having succeeded in imposing a right-to-work model for home healthcare workers across the country, NRTW is gunning after a much greater and unexpected target: exclusive representation.

One of the bedrock principles of American labor law is exclusive representation, whereby a union represents all the workers in a bargaining unit after it shows majority support by the workers. In a new case filed on behalf of a few Minnesota home care workers, Bierman v. Dayton, NRTW is now arguing that a union elected by the majority of workers should not be permitted to represent anyone that does not choose to join.

Last week, I wrote about a new positive experiment in members-only unionism at Volkswagen, which does not follow the exclusive representation model. If it is successful, Bierman v. Dayton would transform all public-sector unions into forced members-only unions, opening the door to a radical reconfiguration of public labor organizations.

In Minnesota, 26,000 home health care workers are currently voting by mail-in ballot whether to elect SEIU as their union. Those ballots are due by August 25. In its first maneuver of Bierman v. Dayton, NRTW filed for a preliminary injunction to invalidate the state law that authorized these workers to vote for a union—in other words, an exclusive representative—to bargain with the state. Expedited oral arguments were held on Tuesday, and on Wednesday afternoon the federal judge denied NRTW’s request for an injunction.

This early loss was to be expected, as NRTW is mounting a novel legal argument that runs counter to decades of labor and constitutional law. And NRTW’s litigation strategy generally includes repeated early losses as its representatives work their way through the judicial circuits to the Supreme Court.

NRTW’s argument in Bierman is not unprecedented, either. The group, whose mission is “is to eliminate coercive union power and compulsory unionism abuses through strategic litigation, public information, and education programs,” included a similar measure in its brief to the Supreme Court in Harris v. Quinn. However, after Justice Sotomayor challenged the NRTW attorney on whether the group truly intended to radically challenge a core principle of American labor law, he backed off the argument.

Now, after having secured a major win in Harris, the Bierman case represents the next step in a multi-pronged attack on public-sector unions, which appears to be directed toward the goal of stripping from all public-sector workers the right to organize and bargain collectively.

So far, most First Amendment challenges to public-sector unions have relied on the argument that membership, or any required payments of any fees, is the equivalent of forced association or compelled speech. However, in Bierman, NRTW is relying on the Petition Clause, which provides the right “to petition the government for a redress of grievances.” According to this argument, a free rider who has benefitted from union representation but refused to pay any fees—a circumstance made possible under Harris v. Quinn—would have suffered constitutional harm by having the union bargain on her behalf.

Through this attack on exclusive representation, NRTW is almost certainly trying to diminish unions’ strength. Seattle University School of Law professor Charlotte Garden points out that a members-only system might lead some states to simply revoke the right to bargain collectively.

“Members-only bargaining might create a level of complexity that some public employers aren't willing to deal with, leading states to eliminate public-sector bargaining altogether,” she says.

“For example, imagine a situation in which groups of employees within a single job classification voted for representation by several different unions that all demanded separate bargaining,” she continues. “That could create conflict among the employees and instability in the workplace that public employers were simply unwilling to deal with. States might then decide the best way forward was simply to eliminate collective bargaining.”

In an ironic twist, however, many labor advocates have also called for a revision of the rules on exclusive representation.

SUNY Buffalo Law School professor Matthew Dimick, who has written widely about some of the problems with the system of exclusive representation, explains to In These Times, “Since the representative of the bargaining unit is almost always chosen by some majoritarian process, there is always a danger that exclusive representation carries with it a suppression of minority interests and points of view.”

He notes that in the past, this has led to people already in positions of power using the union to further their agendas. “Historically,” he says, “the biggest problem has been ignoring or even suppressing racial minority interests.”

Others have argued that it is unfair to expect unions to represent those who choose to pay nothing.

Even so, though, if states were to adopt NRTW’s argument in Bierman, the next step for anti-union groups would likely be to argue that the Constitution prohibits bargaining with even a members-only union—a devastating move for the labor movement in both the private and public sectors. Though this argument may currently seem extreme and untenable, so did the argument that NRTW raised and dropped in Harris, only to pick up again in Bierman.