Railroad Conductor: ‘Railroading Has Changed So Much’ 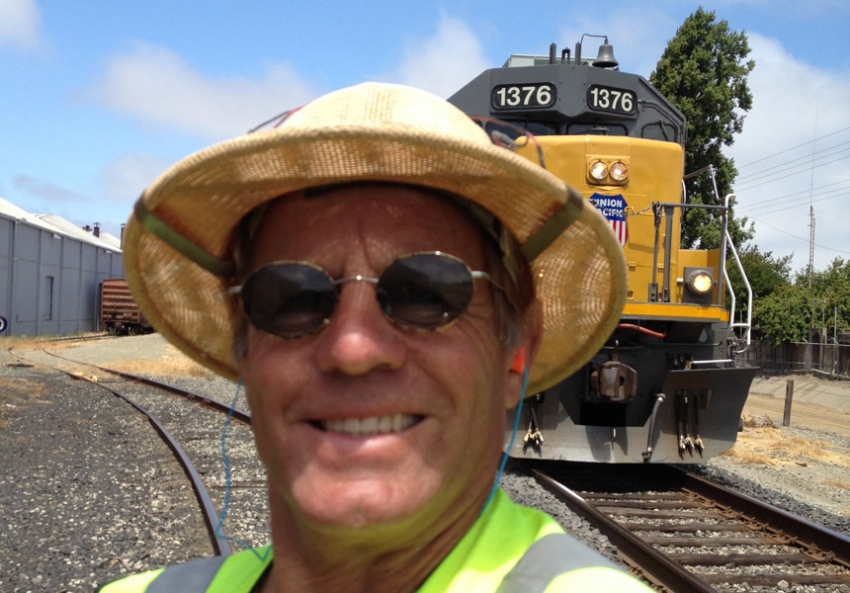 Brian Lewis at work on the railroad.   (Photo by Steve Early)

In Working, Terkel interviewed Bill Norworth, a railroad worker for fifty-three years who had recently retired as a locomotive engineer on the Chicago Northwestern Railroad. In 1970, he was still serving as president of his local of the Brotherhood of Railroad Engineers (which is now part of the Teamsters) in Working, Norworth described some of the changes in technology—including the transition from steam to diesel power—that affected working conditions, job skills and staffing levels during his career working on passenger and freight trains. Reflecting on the higher status of railroaders in the heyday of the industry, Norworth told Terkel: “They were the aristocrats at one time, but that time’s gone now…. The engineer was respected then, and now there’s no respect for him. He’s just a dummy….” As for deterioration of U.S. passenger train service, already evident four decades ago, he observed that, “If they had good trains again, people would ride. But they discourage you…”

Forty-two years later, Brian Lewis talked to In These Times about his job as a Union Pacific Railroad conductor, which he has just retired from after 36 years in the industry. He was long active in the United Transportation Union and also belongs to a cross-union reform group called Railroad Workers United (RWU). RWU has been fighting industry attempts to introduce single-employee train crews, which it believes are unsafe. RWU has also tried to warn regulators and the public about the dangers of longer and heavier trains, particularly those hauling hazardous materials like Bakken crude oil from North Dakota. Lewis talked to In These Times about how rail carriers have changed in the decades since Norworth’s long tour of duty and the challenges facing railroad workers today.

It was a childhood dream to become a railroad worker. Ever since I was a kid, I always loved trains. After graduating from UC-Berkeley and trying my hand at journalism for a few years in the early 1970s, I ended up at the Environmental Protection Agency (EPA) in San Francisco. I felt stuck in the office, doing intake on air quality complaints and setting up investigative interviews. Then, one day I saw a job advertisement—the Western Pacific Railroad was hiring “switchmen/brakemen” for its freight hauling operations between Salt Lake City and the Bay Area. I got my training and orientation in Portola, CA., a small railroad town north of Lake Tahoe, in the Sierras. The union was very involved in the whole process—job training, testing and helping to decide who made the grade and was ready to go. Half of my training class consisted of sons or daughters of existing railroaders.

Railroading has changed so much since then. In this day and age, they want you to have a college degree. But I didn’t dare tell them I had finished college because they would have figured I wouldn’t stick around and not hired me. I really thought I’d be coming back to the EPA so I took a 6-month leave of absence, just in case.  After two months on the railroad, I called and said I was never coming back. In my first six months, I made double and triple the money I was earning at the EPA. Of course, I was working a lot of hours. You used to be able to work 16-hours continuously before 12-hours on duty became the maximum.  It was a lot of very physical work, jumping on and off of moving equipment, throwing switches, with cars rolling in several different directions. They don’t let you climb on and off moving cars like that anymore. It was dangerous—and that’s why thousands of railroaders have been maimed or injured over the years.

No matter how short or long your haul, the union rules required a crew of four—two brakemen, a conductor and an engineer. If one of them was missing, you didn’t leave until you found another warm body. The conductor is in charge of the train; he’s the boss. When I started out in the industry, the railroads employed about 500,000 workers, including an army of clerks. Now, that total number is down to about 220,000.

The big changes began in 1980, with deregulation. Before then, the government set all the rates and there was no competition based on price, just service to the shippers. Deregulation led to industry consolidation, from 25 major carriers to just four today. In 1985, our company became part of Union Pacific.  The railroads were free to sell off their branch lines and charge whatever they want. There started to be a lot of pressure to reduce crew sizes through attrition because of the new technology that permits remote control monitoring and even direction of train operations. It became a kind of race to the bottom.

Fortunately, the federal government stepped in and put the brakes on the trend toward using remote control locomotives operating out of sight. But we still went from crews of four to three, then three to two, and now to one-man crews in some places. In that runaway oil-train derailment and disaster in Lac-Megantic last year, we saw how well that works. That engineer could not do a proper securement of the train alone. You need an engineer and a second person, a qualified conductor, to get out and set the brakes before testing whether the train moves.

Bakken crude oil is pretty damn volatile. But, with a lot more of it to transport in the last year or so, the oil industry just dictated to the railroads: ‘Find us more cars!’ So the railroads went out and grabbed any kind of tank cars they could find, including older equipment not designed to load and carry volatile materials. There’s a lot that were just used to haul wax and tallow and other materials like that. Some oil train cars today are not even up to standard in terms of their wheels, brakes, and springs. It’s scary—you need to have the right equipment and more trains, not giant trains a mile and a half long.  And they certainly shouldn’t be allowed to operate, now or in the future, with one-man crews.

After many years of union activity, I’m now involved in the National Association of Retired and Veteran Railway Employees (NARVE), which is a cross-craft retirees’ organization dedicated to maintaining the national railroad workers retirement system. We don’t get Social Security benefits. Our pension system was created before Social Security, and provided a model for it. Both railroad workers and managers are covered by it.

For the last ten years, I’ve also been a member of Railroad Workers United (RWU), which is not a union, but a cross-craft advocacy group. The idea was that anyone who works on the railroad could be a member of RWU. We would promote unity and solidarity among all the rail unions and try to reduce the infighting between them so we could present a united front against everything that threatens to destroy labor on the railroads. Our goal was to influence the various national labor organizations and bring to the front-burner issues that some of them were ignoring, like safety, staffing, the loss of jobs, and the whole race to the bottom on contract conditions.

RWU has opposed one-man crews, taken a position against remote controls, and tried to warn the public about the dangers of operating trains that are overloaded and too long. These heavier trains are harder to handle and represent a threat to railroad crews, trackside communities, the environment, and public safety generally.