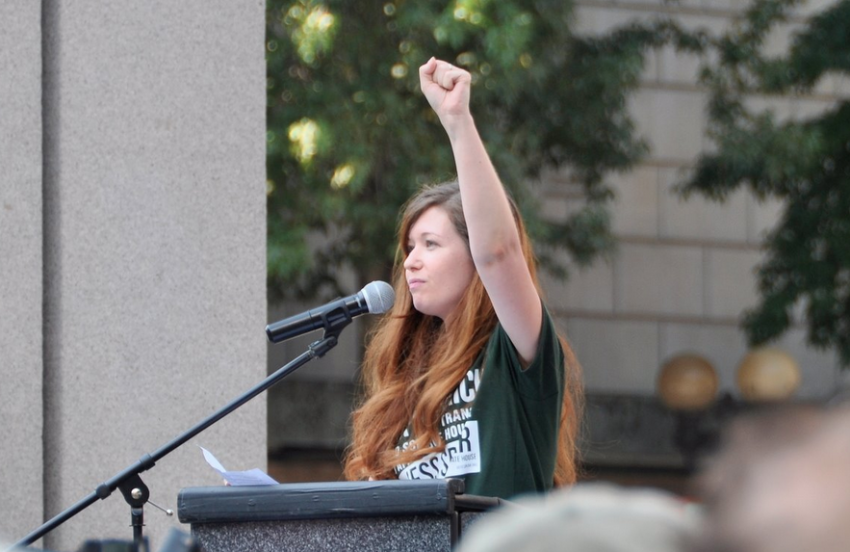 Jess Spear, pictured at a Seattle climate march, may be giving the state's longest serving State House Speaker a run for his money.   (Courtesy of votespear.org)

The popular thinking in Seattle is that Jess Spear is not going to win in her run as a socialist for Washington’s state house.

While her colleague in Socialist Alternative, Kshama Sawant, was successful last year in her third-party insurgent campaign for Seattle’s city council, 33-year-old climate scientist Jess Spear will likely lose her bid to unseat the state's 10-term House Speaker Frank Chopp, a liberal Democrat. In a party whose center is drifting steadily rightward, Chopp is an undeniable progressive who holds the support of Washington liberals who fear the conservative political forces from the eastern part of the state—not a neoliberal Democrat.

Still, Spear and Chopp contrast sharply. He’s an earnest, tie-and-slacks professional. The fresh-faced Spear, often interviewed in a t-shirt and sunglasses, would just as much fit in drinking beer at an indie rock show. A career legislator, Chopp boasts of bills he’s supported over the years, although Spear believes much of his time hasn’t led to substantive change. Spear has gained recognition for facing arrest during an anti-foreclosure action.

In debates with Chopp, Spear has challenged the incumbent’s liberal credentials—in particular highlighting the corporate welfare measures that have passed under his watch, such as the $8.7 billion subsidy package for Boeing that came with no guarantee to keep new production jobs in the state. She noted that it was easy for him to make that giveaway, yet Chopp “could not come up with money for public schools.”

And as might be expected of a socialist, Spear demands a more structural change to Washington’s economy. With decriminalized marijuana and a generally strong union presence, the state is considered a bastion of liberalism, yet it lacks a state income tax. Voters rejected a ballot question to tax individuals earning more than $200,000 per year, but she claimed that Democrats’ inability to use class language like “tax on the wealthy” allowed for the Right to scare working- and middle-class voters into thinking that a new “income tax” would be imposed on them.

“They see it in a very cynical way,” Spear says of the Democrats, who she said wouldn’t use such language against corporate funders in the state. “That’s the difference between us and them.”

To Spear’s supporters, the regressive tax structure has virtually ensured austerity budgeting, no matter the political sentiments of legislators.

“When the state isn't getting money, they cut social services,” said Local 1488 President Paula Lukaszek, who bucked her parent union, the Washington Federation of State Employees, and is publicly supporting Spear. “I believe in everyone paying our fair share to keep the social services, infrastructure, education—the things people want the state to fund.”

These cuts are exacerbated by the changing nature of Seattle, no longer a peripheral American city. Companies like Amazon and Microsoft drive the budget priorities in Olympia, Spear and her supporters allege. Worse, with these companies attracting employees residing in new, high-end condominiums, housing prices have skyrocketed. Chopp boasts of giving state funds for low-income housing development, but Spear wants to go beyond that and impose rent control.

“If the best housing advocate we have is the person who’s overseeing the eighth worst affordable housing in the country, that fact speaks for itself,” Spear said. “He says he’s for rent control, but he’s not campaigning on it. We have a plan for getting that done.”

The state’s labor leaders—some of whom credit Socialist Alternative for livening the national discussion about inequality—are for the most part staying loyal to Chopp and the Democratic Party. Washington State Labor Council President Jeff Johnson explained that Chopp had worked closely with unions on trying to raise the state minimum wage to $12 per hour (SA is demanding a $15 per hour wage floor) and mandates against big companies forcing their workers onto Medicaid of the Affordable Care Act.

“I like Jess a lot as a person,” Johnson said. Her campaign “creates a richer dialogue. The political reality, apart from Speaker Chopp's relatively progressive position, is that things are very vulnerable in our state. We have a relatively progressive governor who is being stymied by a state senate in Republican hands. Moreover, they've been pushing a lot of anti-worker, anti-poor people, anti-community of color, so we need a really strong speaker in the House, and Frank has done a pretty amazing job at that.”

Spear says of the union leaders who have not backed her, “They were still looking at the makeup of the legislature and thought they needed to hold back the Republicans.” Adding that Chopp had failed to push hard for a statewide $12 per hour minimum wage or pass the Worker Privacy Act, “we talked to them about how that's a failed strategy. Democrats have had super majorities in the legislature and what has it accomplished?”

That doesn’t mean she doesn’t have labor support in some capacity. Spear claims that labor leaders have told her, “We hope you get 49 percent.”

Part of Sawant’s appeal, in addition to enthusiastic support from the influential alt-weekly The Stranger, was that she was running for an at-large Seattle council seat, whereas even progressive voters might be wary of replacing a veteran lawmaker in the lynchpin position with a third party newbie.

The paper’s editorial board chose Chopp, although several members published a dissenting opinion, saying that at a “time when the state is unconstitutionally failing to fund its own schools, Chopp refuses to use his prestige and platform to do much of anything about it.” The dissent also noted Spear’s perceived shortcomings, “We wish Spear was a more savvy politician with one single, obtainable goal to fight for in Olympia.”

Sawant’s victory seemed like an outlier in American politics, where socialism is a dirty word. Yet there is no doubt that Socialist Alternative’s organizing has been pivotal in pushing the idea of a $15 per hour minimum wage—something once considered a fringe idea, but which quickly has become a national rallying cry for fast-food worker organizing and the subject of mainstream debate.

And in some cities, socialist groups like Spear’s have played key roles in pushing that debate. In Portland, Nicholas Caleb, backed by both Socialist Alternative and the International Socialist Organization (ISO), failed to win a city council seat in the last election but is credited with advancing the “15 Now” agenda in that city. In New York, Solidarity and Socialist Party member Howie Hawkins and ISO member Brian Jones are running for governor and lieutenant governor on the Green Party ticket and are polling at 9 percent, closing the gap between the two major party candidates.

And with both Sawant and Spear, there is a clear willingness among labor to acknowledge the socialist current in American politics. A few Seattle labor leaders have supported Socialist Alternative campaigns, and even those who still support Democratic incumbents speak favorably of the contributions this leftist electoral force has made in pushing the city’s political conversation in a more progressive direction.

Spear thinks that her campaign is part of that push, but also is a way to protect Sawant, who expects to face a Democratic challenge when she’s up for re-election next year.

“They’re growing their base,” Lukaszek, the Washington Federation of State Employees president, said of Socialist Alternative. “Realistically, [Spear] won't beat Chopp, but there’s nothing like pushing him. And they’re going to keep pushing him.”