Andrew Cuomo and the Sad State of the Working Families Party 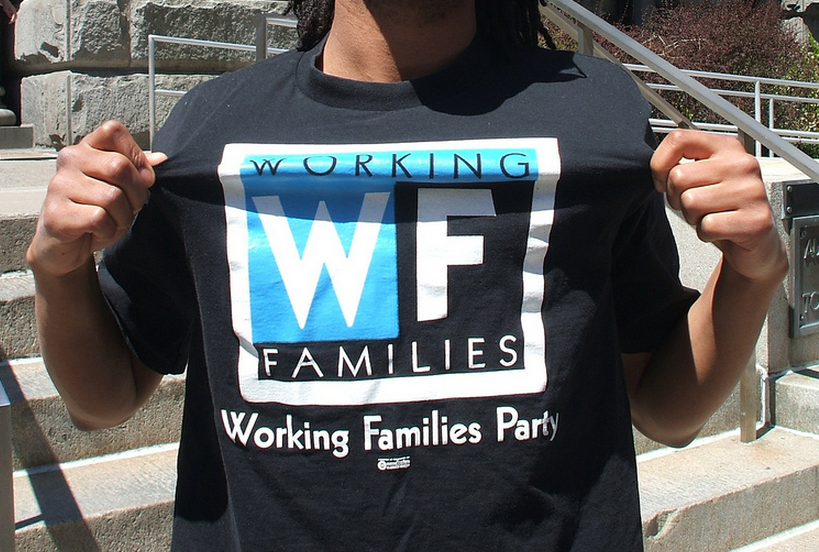 New York's Green Party did what the Working Families Party was designed to do in last night's election: push right-wing Democrats. (WFP)

In 1997, Labour Party leader Tony Blair defeated Tory Prime Minister John Major in a landslide victory. Pointing out that Margaret Thatcher’s successor could not even inspire a consensus within his own party, Blair, with his dashing good looks and confident wit, delivered three verbal bullets on the state of the Tories: “Weak. Weak. Weak.”

This pretty much describes the current status of the labor-backed Working Families Party.

On Tuesday night, New York’s Democratic, but assuredly conservative and hostile to labor, Governor Andrew Cuomo sailed into a second term. But as a referendum on the WFP’s decision to endorse Cuomo rather than run a candidate from the left, WFP received a notable thumbs down.

Scoring fewer votes on its ballot line than Green Party candidate and rank-and-file Teamster Howie Hawkins, the Greens will now have WFP’s place on the ballot, with the WFP to the right of the Greens—a sort of poetic justice embedded into New York’s ballots.

To demonstrate the party’s weakness, one need only look at how far out of its way the WFP went to win voters by not mentioning the candidate at the top of the ticket. Retail, Wholesale and Department Store Union (RWDSU) President Stuart Appelbaum on his Facebook simply said that he was voting for “Governor of New York” on the party line—no mention of who that governor was. Party mailers featured not an image of the governor but of New York City Mayor Bill de Blasio, whose plan for progressive taxation to fund universal pre-kindergarten was thwarted by the fiscally conservative Cuomo.

And there are many reasons why the party couldn’t talk about him. Cuomo failed to make good on a central promise he made in exchange for the WFP endorsement: to push for Democrats to regain control in New York's State Senate.

At the party’s election night celebration at a German beer hall in Brooklyn, Bob Master, political director of Communications Workers of America District, a major player in the party, lamented, “We all wish that he had done more to fulfill the agreement we made to fight for a Democratic state senate.”

The justification for the WFP’s backing Cuomo always comes back to saving the party.

“At the end of the day, what we wanted to focus on was maintaining a durable infrastructure,” Master added. Emily Johnson, a child-care worker who had volunteered in the party’s get-out-the-vote effort said, “If the WFP can rally the vote, [Cuomo will] open up.”

One myth needs to be dispensed with. The party’s advocates maintained in the past two elections that the need to endorse Cuomo was based on the fear that challenging him might mean not getting the 50,000 votes needed to preserve its line on the ballot—a physical location near the beginning of the ballot that gives the party a huge number of votes.

Hawkins received 60,000 last time without running a downstate campaign (he’s from Syracuse), but this year was able to mobilize New York City progressives with his running mate, Brian Jones, a member of the International Socialist Organization and a founding member of the United Federation of Teacher’s dissident MORE caucus, an organization in the style of the current militant leadership of the Chicago Teachers Union.

The real reason comes from a split in the party. The progressive activist wing wanted to endorse Zephyr Teachout at the party’s convention, but unions, who hold significant sway in the party’s voting, had their way and won an endorsement of Cuomo. Some of that was based on promise of an increased minimum wage. For building trades unions, Cuomo’s support for real estate developers means more jobs for their members. Transport Workers Union Local 100 tapped Cuomo for settling a contract deal with the city’s subway and bus workers.

Yet this comes at the expense of other workers. Teachers unions in Buffalo and Long Island, as well as the MORE caucus, endorsed Hawkins, on the grounds that Cuomo has explicitly sought to privatize public schools, and his property tax freezes have made bargaining with school boards nearly impossible. State employee unions that were forced into concessionary contracts under Cuomo’s first term stayed out of the race altogether.

Master acknowledged that many public sector workers, especially teachers, were so allergic to Cuomo that they tapped Hawkins, but added, “the Green Party simply hasn’t demonstrated a record to lead any effort on policy.”

The Green Party’s problem is that it has never held institutional power. Yet without a chance of victory, a vote for the Greens was seen less as an endorsement of its record and more as a way to threaten Cuomo’s mandate in order to pressure him to take labor and progressive demands more seriously.

The irony, of course, is that the Working Families Party was founded to try to push the Democrats leftward. Now the party is spurning voters who voted Green—who were trying to do just that.