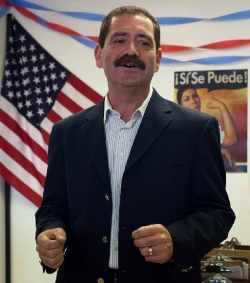 It’s official: There’s a new candidate in the race for Mayor of Chicago, and he could carry some weight. Cook County Commissioner Jesus “Chuy” Garcia threw his hat in the ring on October 27, less than four weeks before the deadline to get on the ballot. Garcia is picking up the torch from Karen Lewis, the wildly popular Chicago Teachers Union (CTU) president who was seen as the most viable challenger to sitting Mayor Rahm Emanuel in the upcoming February election before she was forced out of the race by health problems. Garcia has already won endorsements from Lewis, the Chicago Teachers Union (CTU) and a coterie of other Chicago progressive groups.

At the CTU’s annual fundraiser on October 31, Garcia was introduced to a roomful of progressive aldermen, union leaders and education activists as “Chicago’s new mayor."

Garcia’s supporters tout the work he did as an alderman in the 1980s, when he was a prominent ally to Chicago’s first African-American mayor, Harold Washington. Washington’s time as mayor, from 1983-1987, is widely viewed by progressives as a golden age in local politics, one which many of Emanuel’s challengers in the mayoral race have promised to resurrect.

But that age ended with Washington’s unexpected death of a heart attack in 1987. Soon after, organizations allied with Chicago’s machine politics, such as the now-disbanded Hispanic Democratic Organization and the long-time mayoral lineage of the Daley family, took advantage of the political vacuum to seize the reins of the city. For the next 30-odd years, they worked diligently to stamp out independent progressive politicians like Garcia.

Since he was unseated, Garcia has made fewer headlines, though he returned to politics in 2010 as Cook County commissioner for the 7th district.

That’s in part because Chicago’s local media pays less attention to state and county politics than it does to city shenanigans. But regardless, a man whose name many newcomers to the city don’t recognize is now the candidate that the CTU is asking the progressive community to rally behind.

As state senator, Garcia represented a majority Latino district on the Southwest side with no shortage of social problems, including crime, school overcrowding and lack of access to healthcare. The same is true of the overlapping, heavily Latino 7th District he oversees as Cook County commissioner, where his job is ensuring that residents have access to county services.

Garcia supported legislation in both roles that tackled housing, healthcare and education inequities, among other areas. Most well-known was his championing, as commissioner, a successful 2011 ordinance to require Cook County’s sheriff to decline requests by Immigration and Customs Enforcement to detain immigrants, unless the federal government would pay the detention costs.

During his time as commissioner, Garcia was also one of the sponsors of a county bill to safeguard holders of public housing vouchers from discrimination by landlords, which was signed into law in 2013.

Garcia spoke to In These Times by phone earlier this week. His proudest achievement, he says, was his work balancing Cook County’s budget. In 2010, the county was facing a revenue shortfall of more than $480 million. In response, Cook County President Toni Preckwinkle and the board of commissioners laid out a plan to lay off more than 1,000 county workers, as well as refinance the county’s debt and go after unpaid taxes. In the end, after weeks of negotiations with local unions, the number of layoffs was reduced to 500.

“I am proud of our ability to address budget deficits,” says Garcia, who was in his first year as commissioner during the budget battle. “The budget deficit we inherited was massive, and to balance it we had to lay off 500 people. That was probably the most painful decision we had to make.”

It’s a position that has come under some criticism. In an article on SocialistWorker.org, Lee Sustar called out Garcia for helping implement what Sustar called “Preckwinkle’s austerity budget” and questioned what this would mean for his work as mayor.

“There’s little reason to expect that Garcia would take a different approach as mayor of Chicago, which faces its own looming pension shortfall after decades of underfunding,” Sustar wrote.

Garcia is reluctant to say what he would do as mayor if Chicago faced a similar shortfall. “We are not quite ready to issue position statements on that; we have to look at what the finances are going to be,” he tells In These Times, noting that the mayor controls money collected from Tax Increment Financing.

On the ground, Garcia’s readiness to work on less glossy issues for his constituents, such as helping fundraise for local projects, has drawn praise from community groups. Patrick Brosnan, executive director of the Brighton Park Neighborhood Council, which works on issues from healthcare to gender equality, says Garcia has been very supportive of the group’s work. As county commissioner, Garcia helped the neighborhood council find sponsors and organize local festivals to get funding for a park renovation—park spending is another area of inequality in Chicago, with Latino neighborhoods disproportionately underfunded. He also helped get constituents enrolled in Obamacare and County Care, the county’s Medicaid program.

It’s a stark contrast to BPNC’s relationship with Joseph Moreno, the commissioner Garcia replaced, Brosnan says. “Moreno was a different kind of guy, and really we had no interaction with him at all on any level.” Moreno is now spending 11 years behind bars after federal agents recorded him telling a businessman he wanted to get “fat” on kickbacks.

Some voices from outside Garcia’s constituency, however, say they’ve seen little reason to support him in his work around citywide issues.

Rousemary Vega, an education activist based in the city’s Humboldt Park neighborhood, was rooting for Karen Lewis even before she entered the race. “I was asking Karen to run because I believed her vision,” says Vega. But when Lewis had to drop out, progressives were expected to switch their vote first to Alderman Bob Fioretti and then newcomer Chuy Garcia, Vega says, and she found herself becoming less and less enthusiastic.

“It leaves people in limbo,” says Vega of the shifting candidates. She also says that during one of the city’s most defining fights—against the closure of 49 schools—Garcia was nowhere to be seen. “They closed 50 schools, where was Chuy Garcia?” asks Vega, who had two children at a school that was closed on the Northwest side.

Garcia, for his part, says he has shown his support for public education through his years in government and that he publicly opposed the closings. “I was the first elected official on the Southwest Side during the teacher’s strike to come out and speak at a rally, and I spoke against the closings because they were wrong,” he says. “If I didn’t get publicity for doing it, that’s another thing.”

In 1995, he also voted against the state-level bill that many see as the source of some of Chicago’s biggest education woes—legislation that gave the mayor of Chicago authority to appoint the city’s school board without city council approval.

That Garcia is now running for mayoral office in support of education justice at the same time as a movement is gaining speed for an elected school board in Chicago highlights just how long he’s been a mainstay of local politics, and may explain much of the enthusiasm for Garcia’s candidacy from long-time progressives.

Ramsin Canon, a former union organizer, political consultant and editor of the politics section on local website Gapers Block, says he expects that for those who aren’t familiar with Garcia’s work under Washington, the support of Karen Lewis and other progressives will highlight the bottom-up politics that Garcia’s candidacy stands for.

“What Karen Lewis represented as a candidate was not specific policy programs but a different approach to process,” says Canon, “and the process is that we need to have a revolving door between community and government or labor organizations, not business.”

“Garcia has fought a lot of very hard neighborhood fights,” Canon notes, calling Garcia a “living avatar” of the community-before-business approach to governance. This approach was one promise of Garcia’s campaign the Chicago Teachers Union highlighted in its official endorsement:

With Karen Lewis and the CTU’s support, Garcia is seen as a frontrunner in the mayoral race, which now consists of more than five candidates running against Emanuel.

Whether Garcia’s community-oriented outlook and ringing endorsements from well-known progressives will be enough to overcome the name recognition and $9 million-plus campaign fund of Rahm Emanuel remains to be seen.