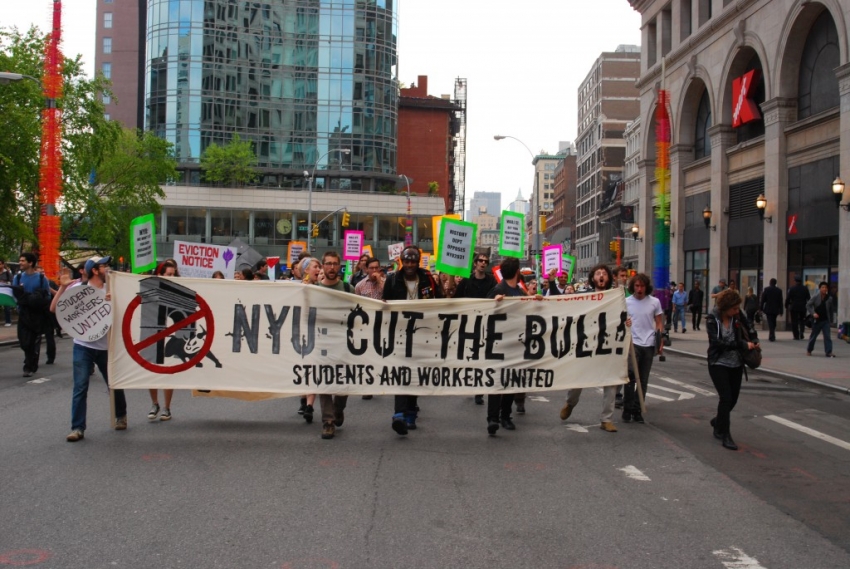 During a rally in Washington Square Park December 2, members of the Graduate Student Organizing Committee (GSOC, affiliated with United Auto Workers Local 2110) announced they were confident that its membership will authorize the union to strike by December 11.

Bargaining committee member Ella Wind, a Middle Eastern Studies student, said that NYU management had not substantively responded to union demands in the past three contract negotiation sessions over the past year. GSOC wants the university to implement an uniform health care coverage plan to teaching assistants—graduate students who teach undergraduate students—rather than differing plans depending on one’s specific school within NYU, Wind explained.

The union is also demanding tuition reimbursement and an improvement for teaching assistant dental benefits. Currently, graduate student instructors can pay into a program, cleverly called the Stu-dent Plan, where they receive dental care from NYU dental students, the union said. Instead, the union wants coverage under the faculty and administrators' dental plan.

GSCO also wants an improvement to the NYU child care plan. GSOC bargaining committee member Shelly Ronen, a sociology student, said students can apply for a $200 per semester child care subsidy from the university—an “insult” compared to other university plans, such as the University of Michigan, which provides direct child care for graduate student employees. GSOC is demanding a childcare support benefit written into their contract for each of an employee's children.

“People feel like things are dragging,” Wind said during the rally.

She added that the union had met with the university and a mediator the previous night.

“Because of our escalation, they’ve been forced to respond,” Wind said. "I’m cautiously optimistic."

In 2002 GSOC successfully negotiated a contract with a health plan and increased stipends for members, but two years later the National Labor Relations Board (NLRB) ruled in a case involving Brown University that private universities had no obligation to recognize graduate student unions. Last December, NYU broke with that precedent under pressure from the union and other activists and formally recognized the union after a 620 to 10 union authorization vote from graduate student workers.

The GSOC rally happened as graduate student instructors at the University of Oregon, which as a public institution is not bound to the NLRB precedent, announced a strike to commence during finals week. Among their demands are a 5.5. percent wage increase for minimum salaries over the next two years and two weeks of paid medical and parent leave per year, according to the Oregonian.

“We’ve been engaging more and more and training members how to talk to undergrads,” Wind said.

Five of the eight members of the GSOC bargaining committee are members of a dissident caucus elected by the membership earlier this fall called the NYU Academic Workers for a Democratic Union, which believed that the previous union leadership had failed to mobilize rank-and-file support. “More and more graduate students are coming to our events,” Wind said. “Students are interested in this.”

The union last struck in 2005. The next mediation session between the union and NYU administrators is December 18.

In the spirit of that mutual agreement, NYU has been and continues to be committed to bargaining in good faith, and we remain focused on achieving a good contract that honors the contributions of our graduate students. NYU’s existing proposals would increase pay for everyone in the bargaining unit, and would extend benefits, such as subsidies for health care premiums, for the first time to those graduate students who hadn’t previously received them. ... There has been less progress than we would have preferred at the bargaining table; however, we take it as a hopeful sign that the union has recently embraced our proposal to bring in a mutually-agreeable, impartial mediator—we believe the mediator will be very helpful in narrowing the gap between our positions.