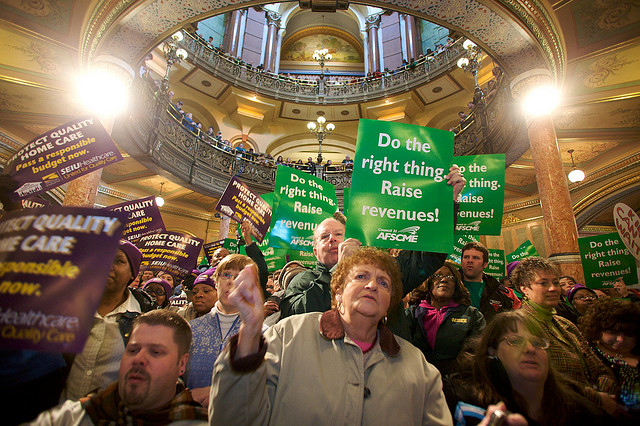 AFSCME members rally at Illinois's state house in 2010. Public employees are preparing to do battle with a viciously anti-union governor soon entering into office in Illinois. (Responsible Budget Coalition)

This election season, the Illinois council, Council 31, of the American Federation of State, County and Municipal Employees (AFSCME) was forthright about holding its nose when choosing between gubernatorial candidates. Bitter with Quinn over his support for anti-union legislation and in the process of suing him for attempting to slash state employees’ pensions, AFSCME did not donate a single dollar to his re-election campaign. The union even spent a significant amount of time in 2012 chasing the governor around the state, everywhere from his hotel to the Illinois State Fair.

However, facing the threat of a viciously anti-union Republican who has vowed to replace state workers’ pensions with 401(k)s and to create “right-to-work zones” within the state—the union spent $2.3 million to defeat Rauner, rallying members with the somewhat uninspiring internal slogan, “At least we know how to fight Quinn.”

Rauner has been vocal about his antipathy to unions. He announced his candidacy with a speech attacking “government union bosses”—a direct reference to AFSCME as well as the Service Employees International Union and the Illinois Federation of Teachers—for the fiscal burden they have supposedly imposed on the state by defending workers’ pensions.

“Rauner appeared to be running not so much against Pat Quinn as against the public employees,” read a post-election statement from AFSCME, explaining why union members hit the pavement.

AFSCME’s and other unions’ efforts failed to prevent Rauner’s victory over Quinn, and Illinois public employees now face an uncertain future. When their contract expires in July 2015, workers will have to renegotiate with a governor who has questioned the very validity of collective bargaining rights for public employees (and even refused to say whether he believes such rights are valid for any kind of worker).

The union is planning to meet with Rauner for the first time in early December to talk contracts. In preparation, the 200-plus members of the AFSCME contract team convened in Springfield, Illinois, last week to hold a “demands meeting.”

No one knows but Rauner how he will engage with AFSCME, says Brent Eliot (not his real name), a delegate from an Illinois city, and this led to a tense demands meeting.

On the one hand, says Eliot, the union emphasized readiness in case “things go badly” with Rauner, setting up a phone tree among members to quickly communicate about workplace actions such as a “button day” (when all employees at a given workplace don pins with a common message), wearing all the same shirt to work, or going out to the street on lunch break to picket.

Because of a no-strike clause in their current contract, AFSCME members are not allowed to strike—Eliot says that AFSCME discourages workers from even using the word “strike.”

“It was stressed to us at the meeting that we’d have to [report] back to our members that we’ve got to get ready—not to strike, but to do something,” says Eliot.

On the other hand, Eliot claims that leadership at the meeting censured some of the more ambitious proposals for demands that came from the contract team, pushing for more “modesty” in their bargaining, though he declined to give details about what those scaled-back proposals were.

One issue that can’t be tackled head-on in contract negotiations is the state’s two-tiered pension benefit system. Because of a 2010 pension reform bill signed by Quinn, all public employees hired after January 1, 2011 are enrolled in a second-tier pension plan with reduced benefits and a later retirement age. When an Illinois Supreme Court judge ruled in late November that the bill was unconstitutional—arguing that the state cannot promise benefits and then take them away—he may have saved the pensions of the first tier of employees, but the second tier will remain compromised by the reforms.

Eliot, who considers the two-tier system one of AFSCME’s most important battles, points out that the contract team has little power to resolve the issue. According to him, AFSCME intends instead to invest in lobbying the Illinois legislature on this front.

One of the biggest unknowns for AFSCME’s contract team is whether or not Rauner’s representatives will even show at the December labor management meeting. It had been traditional for the union to meet with Quinn to talk over the impending contract renegotiation, but according to Eliot, the union does not feel confident that Rauner will agree to meet.

“We don’t know if he’s going to try and make us sweat, or meet immediately and try and settle. We have no idea,” he says.

“Given all the challenges facing the state we can’t imagine that he would want to seek conflict or chose further division,” says Anders Lindall, spokesperson for AFSCME. If Rauner wants to invest in the public services that Illinois residents “pay for and count on,” says Lindall, “we stand ready to be a partner to anyone of good faith that wants to work together.” He adds that AFSCME has a proven record of working productively with Republican governors.

On the other hand, if Rauner takes his confrontational campaign rhetoric to Springfield, says Lindall, “we’ll have to be prepared to deal with that eventuality.”

As difficult at Rauner may prove to be, Eliot says that he doesn’t sense any regret among his coworkers for not coming out more strongly for Quinn. In the end, it is Quinn’s fault that he lost the election, not AFSCME’s. “He was a bad candidate,” says Eliot.

As a Democrat in one the most solidly blue states in the union, Quinn shouldn’t have had such a difficult time winning a second term. Both chambers in the Illinois congress are controlled by the Democratic Party, the mayor of Chicago is a Democrat, and the most powerful Democrat in the country—President Obama—calls Illinois home.

But many Democrats weren’t inspired to vote for Quinn. One of them, Fred Klonsky, argued in this blog that the governor alienated his liberal base by fumbling the pension crisis, angering teachers unions with Senate Bill 7, and choosing Paul Vallas, the former CEO of Chicago Public Schools reviled by the Chicago Teachers Union for his support of free market education reform policies, to be his running mate.

“As odious as the alternative may be,” wrote Klonsky, justifying his refusal to bite the bullet for Quinn, “many of us will never be willing to cast votes for Democrats who have aimed to gut our livelihoods.”

Now, because of Quinn’s failure to rally Illinois’s working people behind him, the buck stops at Rauner, who may very well be aiming to dismantle AFSCME during his tenure.