I Didn’t Vote for Pat Quinn, Because He’s Trying to Destroy My Pension 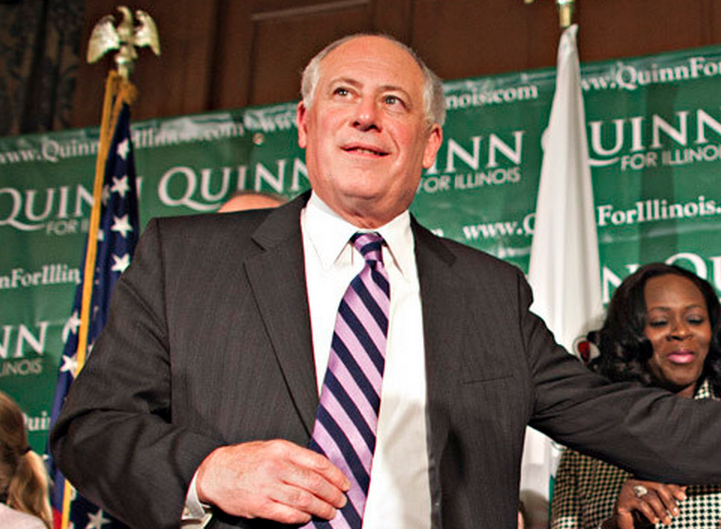 My abstention wasn't an act of apathy or disinterest. It was an act of conviction.

Governor Pat Quinn, who just lost to Republican Bruce Rauner, is a Democrat. Both chambers of the Illinois General Assembly currently hold Democratic veto-proof majorities.The Mayor of Chicago is a Democrat.

Should I have expected that in blue Illinois, of all places, my teacher pension would be safe from pension theft?

For over six decades, Republicans and Democrats have failed to meet their moral and legal obligation to fully fund the state’s public employee pension system. The pension system is now over one hundred billion dollars in debt.

At a 1970 Constitutional Convention, language was added to the Illinois Constitution that specifically forbid the legislature from diminishing or impairing our pensions. And yet on December 3, 2013, that is exactly what the Democratic Party-controlled General Assembly did. And Governor Pat Quinn signed it into law. The bill is currently being fought over in court.

Quinn had declared that he was put on this earth to solve the pension problem. But the problem of the one hundred billion dollar debt cannot be solved by cutting benefits—it can only be solved by raising revenue.

I am a retired teacher and a former local union president. I am now head of my local chapter of retired teachers in the Illinois Education Association, an affiliate of the National Education Association. In the two years since my retirement, I have written articles, made speeches, attended countless meetings, lobbied state legislators and generally been as much a pain in the ass about pensions as I could possibly be.

I remember one public meeting at Aurora East High School. I was on the stage with Democratic State Representative Elaine Nekritz. Nekritz is a powerful Chicago suburban representative and legislative leader in the attack on public employee pensions.

A teacher in the audience angrily stood and accused Representative Nekritz of stealing money from our pension fund. A smirking Nekritz responded, “We didn’t steal it. We never put it in there in the first place.”

Although I focus on pensions, please understand that I am not a one-issue voter. Governor Quinn was also responsible for enacting Senate Bill 7. This law essentially gutted teacher tenure and seniority protection. It tied teacher evaluations to individual test scores. It required a 75 percent vote of all Chicago teachers in order to authorize a strike instead of the previous requirement of 50 percent plus one of voting teachers.

It also limited the issues that the Chicago Teachers Union could bargain over to salary and working conditions. SB 7 was drafted as a collaborative effort between Democratic legislators, Stand for Children’s Jonah Edelman and the state’s two teacher unions, intended to weaken teachers’ power and prevent the CTU from striking.

Of course, we know what that led to. Over 90 percent of all CTU members voted to authorize a strike. CTU leaders made demands that went far beyond salary and working conditions. They bargained on behalf of their students and neighborhoods. And, despite the efforts of Democratic lawmakers, the CTU won.

If cutting teacher pensions and SB7 wasn’t enough, just to rub it in, Quinn announced that he would choose as his running mate Paul Vallas, former head of Chicago Public Schools before Arne Duncan.

Richard Daley, Rahm Emanuel’s predecessor, had fired Vallas. But Vallas went on to earn his keep trying to destroy the public school systems of New Orleans, Philadelphia and Bridgeport, Connecticut.

To be truthful, I would rather burn in everlasting hell than put a plastic pencil to the voter touch screen next to Paul Vallas’ name. But that is what my union wanted me to do. And I just couldn’t stomach it.

I am not opposed to voting, or voting for a Democrat. I have voted for many and campaigned for a few, and some have turned out well. I know, of course, that Governor-Elect Bruce Rauner is going to be absolutely vicious to the state’s workers. But I promised my union colleagues and the Democrats, including Governor Quinn, that I would not support any of them if they broke their moral and legal obligation to the teachers of this state. They did, and they didn’t receive my vote.

If Democrats want to beat plutocrats like Rauner, they can’t do it through cutting the pensions of workers like me. Because as odious as the alternative may be, many of us will never be willing to cast votes for Democrats who have aimed to gut our livelihoods.